Mom and I have wanted to go to Perella’s Ristorante for years, but something or other had always kept us from trying it out.  We never really heard any feedback on the restaurant, and the online reviews were just “ok.”  Since our movie didn’t start for quite some time, we decided to finally give Perella’s a shot. 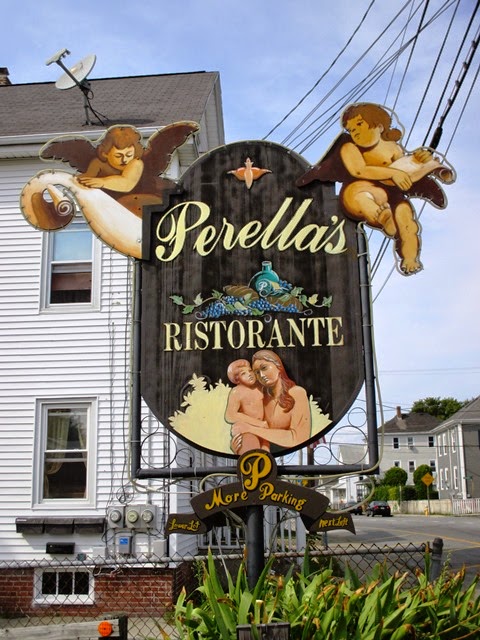 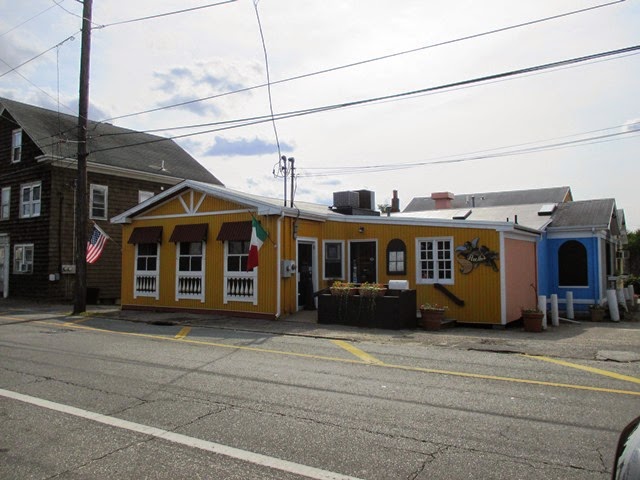 We parked in an empty lot and stepped inside the colorful building.  We walked past the bar area where there was no one seated and into the empty dining room.  Our waiter, Robert, had been arranging one of the tabletops when we walked in, so he greeted us right away and told us that we had our choice of seating.  We chose a large table by the window so that we could feel the warm breeze.

Perella’s is cute inside with little Italian trinkets scattered throughout, but I can see what people mean when they write about the restaurant being “dated.”  I will say that everything was very clean and that Robert was an excellent server throughout our entire meal. 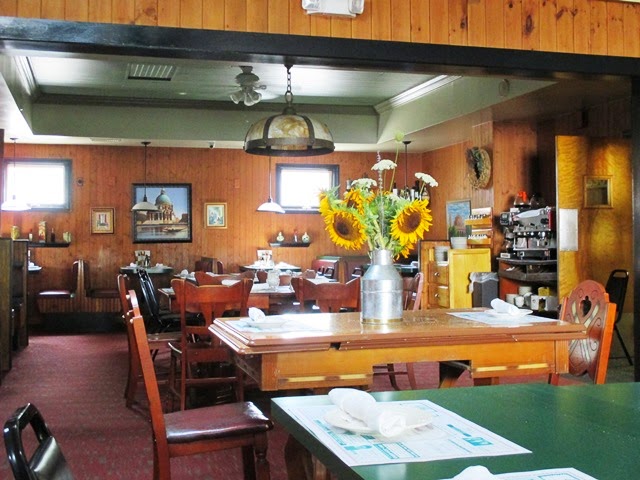 Robert handed us menus (click here to view) and discussed the soups of the day.  He took our drink order – two waters with limes – and brought us a tasty bread basket complete with freshly roasted garlic for spreading.  The smell of the garlic was amazing and Mom and I had never seen anything like that before.  It was a nice touch and gave the soft bread a lot of extra flavor. 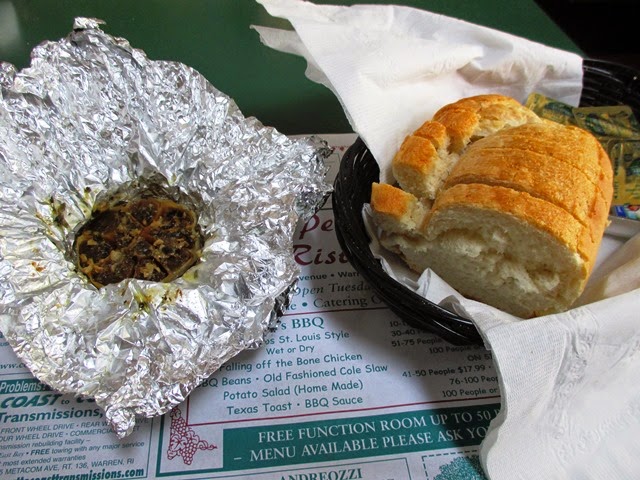 For our entrees, Mom chose the lasagna ($14.95) and I went with the stuffed shells ($10.95).  Both came with a soup or salad option.  Mom chose the pasta fagioli soup and I went with the chowder.  They arrived quickly but right away I could tell that my chowder was not chowder at all.  It was more of a white clam soup.  It was absolutely filled with potatoes – most of them raw – and large pieces of celery.  There were no more than three clams in the soup, and the bland broth tasted like chicken.  It was the most watery chowder I’ve ever had, and I told Robert that although it was my choice to get chowder in an Italian restaurant – I was not a fan.  Mom’s soup tasted better than mine but in keeping with the theme, the soup was very watered down.  There was no texture to the broth at all.  The soup had a strong smoky pork flavor and plenty of pasta shells, but hardly any vegetables or beans and certainly no spices.  If it wasn’t for the pork taste, the soup would have been so blah. 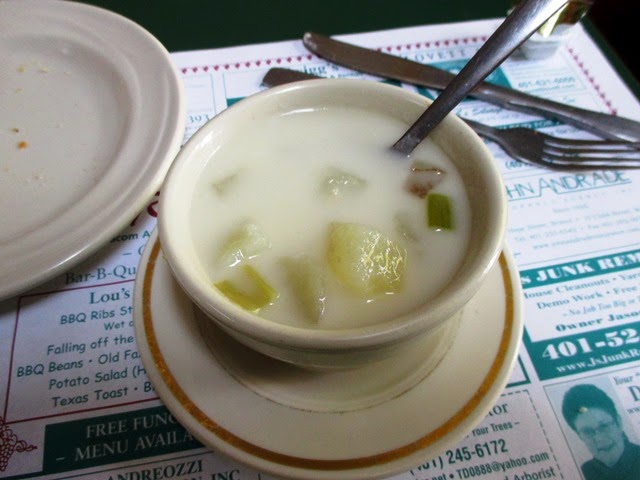 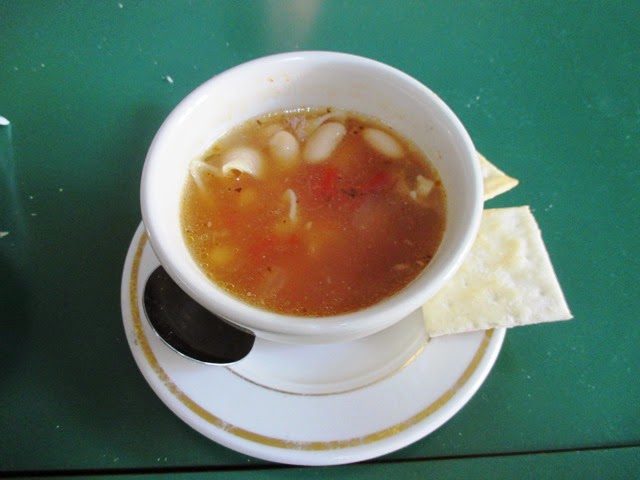 We were hoping our entrees would be better than the soups, and when they arrived we had very high hopes.  My shells came in a casserole dish filled with fragrant tomato sauce (made with pork butt) and topped with cheese.  Mom’s homemade lasagna was an enormous brick filled with ground beef and ricotta cheese.  When I started to dig in, I noticed something.  There was a lot of water in my dish.  The pasta was extremely wet and therefore the ricotta cheese that my shells were stuffed with started to disintegrate.  I did enjoy the fact that the shells were actually stuffed, but unfortunately the taste of the watery pasta was a bit of a turnoff.  The sauce was nothing to write home about and the cheese on top tasted like store-bought shreds.  It certainly tasted homemade, but not in a good way. 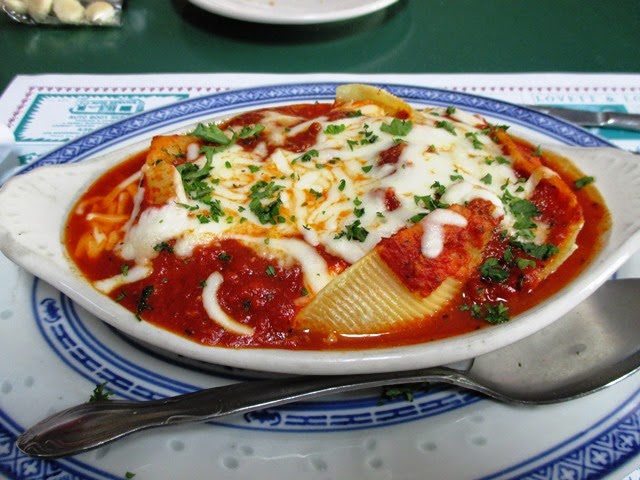 Mom’s lasagna – although huge in size – was flavorless.  She couldn’t find an Italian spice in the dish if she had a magnifying glass.  The noodles themselves were watery, just like someone threw a box of Barilla lasagna noodles into a pan and took them out – water attached.  The meat sauce seemed to be just ground hamburg.  There were no tomato chunks, no peppers, no onions and certainly no spices.  The ricotta could have been a container of Sorrento, and the mozzarella on top could have come from a bag.  The sauce was so smooth it was like someone opened a jar of Ragu and poured it on top without jazzing it up.  Mom said she’s never had Italian food that has been so bland, and she LOVES Italian food and gets it often when we dine out. 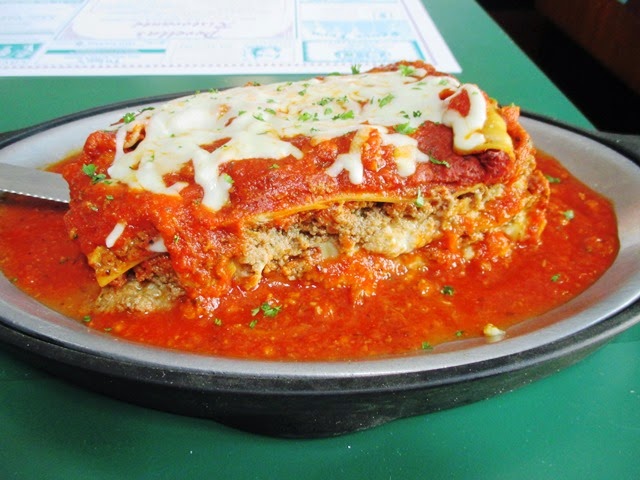 I finished my dish, but Mom took half of hers home because of its size.  Our total for the meal was $27.95.  Robert offered us a dessert menu, but we declined.  We ended up chatting for a while about different foods and movies.  To be honest, Robert was the best thing about our experience.

Although we didn’t have a terrible time, we probably won’t be back unless we hear that things have improved.  It’s a shame because we feel that Perella’s has a lot of potential, but we can’t understand why the food was so flavorless.  Also, if everything is cooked in house, why did everything taste store-bought?  For the money they charge for the meals, they could have put a little more love into the food.