12 Blanchard Road
Quincy, MA 02169
(617) 773-1500
www.gennaroseatery.com
My mother is a woman in love - and oddly not with my father. She has fallen for Gerry, the owner of our favorite Italian restaurant - Gennaro's Eatery. Although perhaps it has something to do with Gerry's cooking abilities rather than his good looks, Mom always gets starry-eyed when we visit. 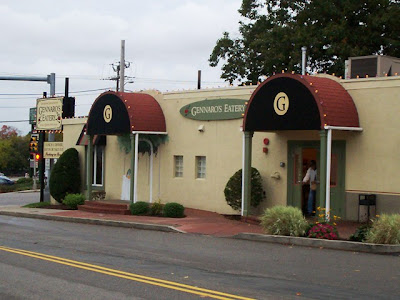 Although some think we're crazy to drive from Fall River to Quincy just to have Italian food, I say once you've had a meal at Gennaro's, the phrase "Olive Garden has the best Italian food" should never be uttered. At first we were a little concerned that the restaurant was going to be packed. Due to its popularity and size of the dining room, this place fills up quickly. However, as we pulled into the small parking lot, it seemed that the craziness had not yet begun. I was even able to score a parking space! With only 14 spots (including handicapped) available, it must be nuts trying to find a place on a busy evening. The Gods must have been smiling down on us.

Upon entering the restaurant at around 4:30 p.m., we noticed that something had changed. It seems that Gennaro's had been renovated, and the changes were beautiful. We stopped at the front desk where we were greeted by a friendly hostess. She informed us that she would have to check to see if there was a table available, and she quickly disappeared into the dining room. Then, we heard it. A jovial voice coming from behind a row of lemon cakes featured in the dessert window. It was Gerry. My mother was all aglow. Standing at the take-out window, he had spotted us waiting for a table and began to exchange pleasantries with my mother about desserts. Since Mom was distracted by the fabulous Gerry, it was up to me to bid him farewell as the hostess returned to lead us to our table. We were seated at a back table near a window, which was coincidentally the first table we had ever dined at. I was hoping that this meal was going to be just as good as the first.
The interior of Gennaro's is quite beautiful. With a mixture of both tables and booths, the restaurant is able to accommodate every patron quite comfortably, despite only seating 70 people. The warm green and beige colors compliment the burnt orange fabrics and curtains, while the low lights and chandeliered booths bring a cozy feeling to this delightful family style restaurant. An added touch are the framed photos throughout the dining area and the Italian music playing in the background, while the shaded windows give customers an optional view of busy Blanchard Road. As always, I tried to take a picture of the interior. However, I had a hard time doing so because of the crowd, so I've included both my attempt and a picture from the Gennaro's Web site, which is fantastic. The site really gives an in depth look at everything Gennaro's has to offer, including the menu!
< 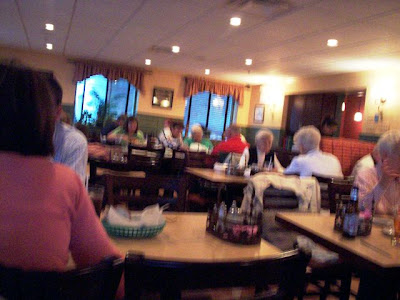 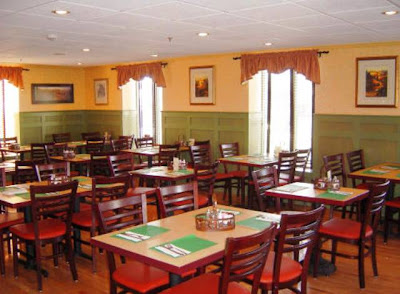 picture from the Web site

After looking quickly at the plastic-covered menus the hostess had left us with, we were greeted by our waitress. Her name was Erica, and she - along with the other staff members - were dressed in black uniforms. I really think this brings an air of class to restaurants. She was very polite and handed us a handwritten list of specials, although it was a bit on the illegible side. For our drink order, Mom chose a Coke while I ordered a Diet Coke. While Erica went to get our drinks, I spotted what would soon be my meal on the list of specials - the toasted pumpkin ravioli with sage cream sauce ($12.99). This sounded so delicious that I folded my menu and put it to the side, because I was done looking. Mom was still mulling over what to get since Italian food is her absolute favorite. When Erica returned with our beverage-filled glasses (mine was topped with a lemon), she also brought a basket of fresh bread with butter, and asked us if we were ready to order. I stuck with my toasted raviolis, while Mom ordered the manicotti with meatballs ($9.99). Erica took away the menus while Mom and I started buttering our bread. It was so hot and delicious that we each had a second piece right away.

There is plenty to choose from at Gennaro's. On previous visits, Mom has ordered the chicken parmigiana with penne ($11.99) and she said it was the best she's ever had. I've ordered both the Florentina pizza ($9.99) and the pesto ravioli, which I unfortunately noticed had been taken off the menu. Both meals were absolutely fantastic. The appetizers range from a $4.99 loaf of garlic bread to a $6.99 shrimp scampi. Also on the menu is a large list of soups ($3.79-7.99), salads ($3.99-7.99), Italian subs that are prepared on sub rolls and served with chips ($5.99-7.99), calzones ($7.99-12.99), and pizzas, including traditional brick oven and speciality topped ($6.99-12.99). Lunch is served from 11 a.m. to 3 p.m., and both the lunch and dinner prices are listed on the menu. Aside from the many pasta, chicken, seafood, veal, and pork specialties available, there are several traditional house specials. With dishes like the lobster and pumpkin raviolis ($11.99), baked ziti ($11.99), potato gnocchi ($11.99), fettuccine Alfredo ($10.99), linguine in clam sauce ($10.99), and rigatoni rustica ala vodka ($11.99), it is no wonder why these meals have become a favorite with customers. Gennaro's has a large dessert menu, and all the desserts are made on the premises using Gerry's authentic recipes. Although Mom and I have only been able to make room for dessert on one occasion, we were sure that we made the right choice. We ordered the tiramisu ($4.29) and it was the absolute best version we have ever tasted. It was moist, fresh, and topped with real whipped cream. Other desserts include ricotta cheese filled cannolis ($2.49), carrot cake ($4.29), chocolate layer cake ($4.49), and Italian style rum cake ($4.49). Daily specials are also available. Gennaro's also has a kids' menu, and list of side orders that you can order in or take home, such as two meatballs or two sausage ($2.79), chicken parmigiana ($6.99), or some of their homemade marinara sauce (pint $2.99; quart $5.49). Gennaro's also serves alcohol, and has a large list of both beer and wine. Make sure to ask your server about the recommended wines with certain meals.

When our food arrived, it was delivered by a man who seemed to have a heavy Italian accent. He was very polite and placed each steaming platter down in front of both Mom and myself. Mom's manicotti was accompanied by what looked like two baseballs. She had never seen meatballs that big before, and she was very pleased to see that they were well done. At first she was afraid that, because of their size, they would be a bit mushy inside. To her enjoyment, they were both tasty and deliciously spiced. The tomato sauce was more sweet than tangy, and the three manicotti were filled with a creamy ricotta cheese blend. 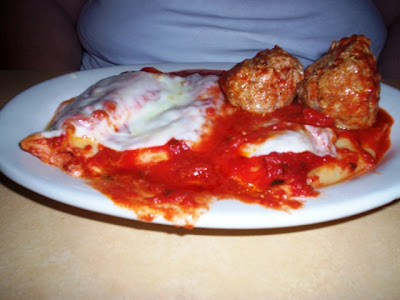 To my surprise, my dish actually came with chicken. This may have been mentioned on the list of specials, but I hadn't noticed it. The four pieces of white meat chicken were topped with the same sage cream sauce that the raviolis were in. The chicken was extremely moist and tender, and the raviolis were to die for. The pumpkin filling was spiced with nutmeg and cinnamon, and the breading was delicate and flavorful. I have had pumpkin ravioli in other restaurants before, but never toasted. It was definitely a fantastic dish, but a bit on the heavy side. I wasn't able to finish one of the raviolis and some chicken pieces, and believe me, I was kicking myself for it. I didn't want to leave any of this dish behind. It quickly became one of my favorites. 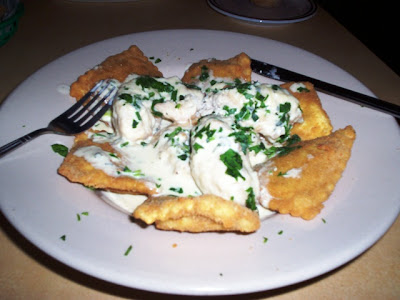 When Erica had come over to our table to ask how our meals were, we gave her one of those mouths-filled-with-food kind of responses. While we were stuffing our faces, we noticed that the couple at the next table was not only taking home their leftovers and ordering dessert, but they were ordering extra servings of sausages and meatballs. When their waitress brought over a large piece of carrot cake, the gentleman exclaimed, "This is the best presentation of a carrot cake I've ever seen. This guy really knows how to do it." They continued to ooh and ahh over the dessert until all that was left was the empty plate. You could tell that these people were definite hardcore fans of Gennaro's.

Erica must have noticed that Mom and I had stopped moving because we were so full, so she returned to our table to clear away our plates. After turning down her offer for dessert and coffee, she left us with the bill:

We left $34 on the table for Erica, including 20% tip. She was an great waitress. After climbing through the crowd that had gathered near the dining room and the take-out window, Mom and I decided to use the restroom. Since there was only one unit, we had to take turns. While I was waiting for Mom, I decided to track down a new take-out menu because Gennaro's had not only changed the interior, but also updated some of the items. Mom spent her time waiting for me by watching Gerry serve customers. The restroom was adorably decorated, clean, and organized.

Although Mom didn't get a chance to say goodbye to Gerry, we left Gennaro's with full bellies and big smiles. The crowd was definitely starting to thicken, and we were glad to be getting out of there at around 5:30 p.m. - before the dinner rush. Gennaro's Eatery remains our favorite Italian restaurant because of its beautiful dining room, fantastic food, low prices, and friendly atmosphere. It is the perfect place to bring a date, stop by with friends, or get together for a family event because Gennaro's also specializes in catering. Neither Mom nor I have ever had a bad thing to say about this place - and I doubt we ever will ... especially while Gerry is there.

Gennaro's Eatery is open from 11 a.m. to 3 p.m. on Monday, and 11 a.m. to 10 p.m. on Tuesday through Saturday. Sundays are available for the pickup of pre-ordered catering and private parties only. All major credit cards are accepted.