After receiving some unhappy e-mail regarding our old review of Ma's Donuts in Middletown, RI, Mom and I promised our fans that we would give this bakery another shot. Since we were in the area, Mom thought that it would be a perfect time to go through the drive-thru and get a half dozen Ma's donuts. I pulled into the drive-thru at just around 6:30 p.m. 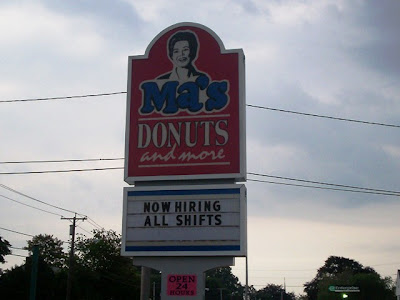 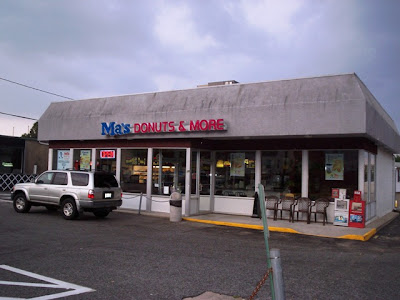 Since Ma's Donuts is open for 24 hours, it seems to be a big hit with the Newport Grand Casino set (since it is right down the street). I knew a few girls from my old job that always made a point to stop by Ma's after a long night of gambling. With our first review, we basically said that Ma's had "uninspired" donuts. They were good, but nothing special. This caused quite a stir with a few fans who actually go out of their way to pick up a box of these doughy delights. Since we wanted to be fair, Mom and I decided that on this visit we will order six assorted donuts. We let Ma's choose the donuts because a) we were going through the drive-thru, and b) we would never discriminate against a particular donut. We love them all! 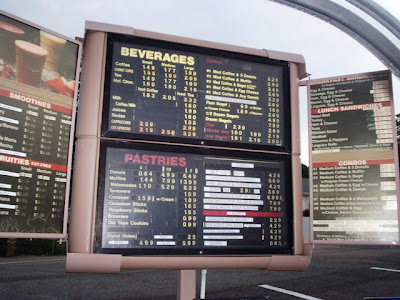 When I arrived at the drive-thru window, I was immediately greeted over the loud speaker. The gentleman asked me what I would like, so I said, "A half dozen assorted donuts, please." He muttered something that we thought was "drive up," so I headed toward the window. When I got there, the gentleman asked me what kind of donut I wanted. I told him that I wanted six assorted. He said, "What?" I said, "Assorted." He just stared blankly, so I said, "You know ... mixed?" I even made this mixing sign with my hands which probably looked more like I was kneading dough rather than explaining what assorted meant. Then, he asked me how many I wanted. I said, "Six." OH MY GOD! Pay attention! I don't want to be discriminative, but why do stores and restaurants always put the person who knows the least amount of English either manning the phone or serving customers? I mean has no one ever come through and asked for an assorted box? Thank God we didn't order coffees or we would have been there all night. Once the gentleman and I were on the same page, he handed me my box of donuts and quoted me $4.99. Mom and I headed home with our donuts in a pretty Ma's box. 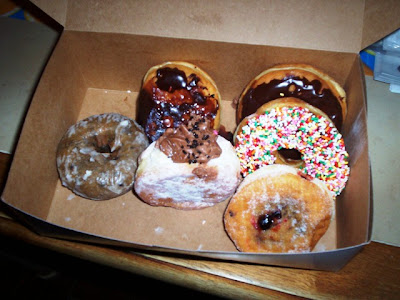 After dinner, we brought out the donuts so that she and I - and Dad - could all have one. When I opened the box, I was a bit disappointed to see that the donuts had rolled around inside of the box they were placed in. One of the donuts was frosted, and most of the frosting had rubbed off. Perhaps there isn't a need to have boxes that only hold six donuts. We shrugged it off as Mom and I were the first to dig in. She chose the chocolate cream-filled donut while I picked the blueberry cake. Mom's donut, although packed with chocolate cream, was a little on the dry side and not very flavorful. She felt that the filling actually tasted better than the donut. Mom has had this type of donut before from other places - including Dunkin' Donuts - and she said that it was much better at the other establishments. Dad's jelly donut was packed with so much filling that it was starting to split on the side. My blueberry donut was good, but I can find the same thing at Dunkin' Donuts, only theirs taste a little better. When I came home from work the next day, Mom told me that if I wanted to have another donut, I'd better act fast because they were already drying out. The remaining donuts we ate were good, but again, nothing special.

Although we didn't go inside of Ma's Donuts, we saw the interior through the large glass windows. The walls were a deep rose color and there were several seats that you can choose from. There were also a few chairs set up outside for people who wanted to enjoy the fresh air. What I didn't know is that the inside of Ma's (not just the drive-thru) also stays open for 24 hours. I had to call and verify this as most drive-thru places close down their eat-in section after hours. On the menu, Ma's offers your normal breakfast/bakery type items such as donuts, breakfast sandwiches, cookies, muffins, and assorted pastries. They also have malasadas, which is fried dough for you non-Portuguese fans. Ma's also has a long list of drinks like coffee, iced coffee, cocoa, smoothies, and fat-free fruities, which I'm assuming is a fruit drink. Lunch is also offered here with sandwiches such as chourico and peppers, roast beef, ham and cheese, and turkey. The prices are average for this type of restaurant, and Ma's offers several combo specials that may be a little easier on the wallet.

There is one thing that Mom and I always notice about Ma's Donuts - it always looks closed. The parking lot is usually empty, and it always looks pretty dark inside. I don't want to say that Ma's has a dated look, but there is something about the exterior of this restaurant that would lead me to assume that it was dingy inside. However, it's obvious that Ma's has a loyal fan base which is what has kept them thriving as a business.

We wanted to like Ma's Donuts. We really did! However, we have to stick with our original decision. These donuts are uninspired, and it's a shame because out-of-the-way places like Ma's usually have fantastically unique donuts. Perhaps they'll improve over time, but it's sad when a large chain like Dunkin' can serve up a better tasting donut.

Ma's Donuts & More is open daily for all 24 hours.