My mother keeps reminding me that there are no Jewish delicatessens in the immediate area. Are we Jewish? Nope, but Mom insists that this city is in dire need for something new on the culinary scene. Since I've never really had any typical Jewish delicacies, I decided that one day I would take myself out to lunch at a local place that is known for carrying things like lox spreads and knishes - New York Bagel. Well, today was the day. I pulled into the parking lot of the Fall River store, which is located in a large plaza, at around 1 p.m. 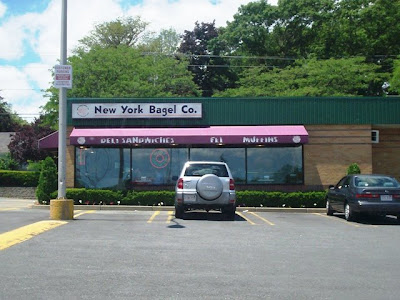 Before I left the office, I placed a call to New York Bagel and asked a very friendly gal to prepare a lunch order so that I could just run in and pick up my food. With the online menu on my computer screen, I rehearsed what I was going to order with Mom, who was at home living vicariously through me because she was too chicken to try this on her own. I wanted to make sure that I ordered every Jewish thing on the menu, so I chose a rye bagel with plain cream cheese and lox slices, a side of whitefish salad, a Kosher dill, and a potato knish. Mom mentioned something about getting a Dr. Brown's soda, but I didn't see that on the online menu so I just assumed that New York Bagel didn't carry it. That was confirmed once I stepped inside and peeked inside the drink coolers. I stepped up to the register and gave my name to a girl behind the counter. My order was already prepared and bagged, so all she had to do was ring me out. After a few miscalculations, I received my total: 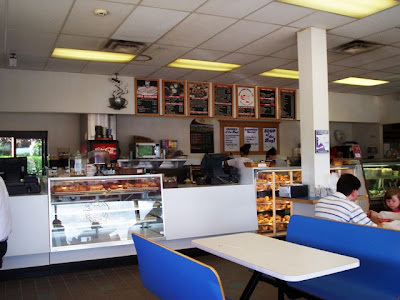 A little expensive, but to me it's all about the experience. After paying, I headed back to the office where I laid everything out on my desk. I had to track down some silverware (they forgot to put some in the bag), but when you work in an office, there is always at least one file cabinet devoted strictly to ketchup packets, menus, and plastic ware. Once all the food was out in the open, I noticed a strong smell of smoked meat, which I assumed was coming from the lox. It wasn't a bad smell, but it was very potent. I decided to try the whitefish salad first. When I opened the plastic container, the salad inside reminded me of those weird cans of Underwood Deviled Ham or Chunky Chicken spreads - almost pasty. As I brought the fork up to my lips, I suddenly felt like I was Chef Anthony Bourdain on one of his many exotic excursions - only I wasn't about to eat monkey brains or seal eyeballs. The taste of the whitefish salad was OK, but I was completely overwhelmed by how salty it was. I kept having to take a bite of my Kosher dill between forkfuls just to clear my mouth of all the salt residue. Do Jewish people have high blood pressure? After eating this, I certainly did. I finished the entire container, but the salad did not impress me that much. 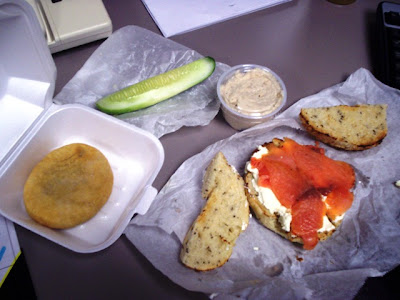 Next, I finished the rest of my pickle, which was cool, refreshing, and very cucumbery. Now, I've had a potato knish once before and it was quite good, so I was looking forward to this next part of my meal. However, the potato inside was very crumbly when I cut it in half. When I first called to place the order, the girl on the phone asked me if I wanted the knish heated. I doubt that heating it would have made the potato flake apart, but it still had a really good taste. It was basically a mashed potato pancake.

Finally, the time had come for me to try the lox slices on the rye bagel. I was scared to death. The smokey smell was making me a little nervous, but I stayed positive and took a bite. I did not have an immediate reaction, but once I had been chewing for a few seconds I felt the little piece of lox in my mouth. It had the consistency of sandwich meat and had a very fishy flavor. I asked Mom earlier why lox was orange, and she told me that it was salmon. I really had no idea. I've only really had salmon when it has been mixed in with other things. Straight salmon on a bagel was interesting, but not something I would probably eat again. The saltiness alone was really starting to get to me. I ate three quarters of my bagel before stopping. There was just no room left! I felt very full and extremely thirsty. I guarantee that my blood pressure was sky-high (like 200/200). I even started to feel lightheaded later on, as dramatic as that sounds. However, I drank lots of water, tea, and iced coffee and felt much better.

My family has been visiting New York Bagel for years because we think that these bagels are the best in the city. They have a large variety of different bagels such as spinach, Asiago cheese, chocolate chip, berry, poppy, and salt. Two big hits with my mom and sister are the rye and the cinnamon sugar. They also have a list of specialty cream cheeses like the walnut and raisin, scallion (low-fat available), sundried tomato, and blueberry. All bagels are made fresh on the premises, and cost under $3 depending on which spread you want (minus the lox slices). New York Bagel also makes fresh salads, sandwiches, and other breakfast pastries like muffins and croissants. They also have a list of beverages that includes everything from soda to French vanilla cappuccino. The pizza bagels ($1.40) seem to be very popular, so I'm going to have to try one of those very soon. My only complaint with the food is that they put too much cream cheese on your bagel! They put it on with an ice cream scoop, so be sure to ask them to go easy on the spread, unless you like that sort of thing. Also, sometimes the service isn't that spectacular. The workers seem like they are concentrating on everything but your order, which is a bit annoying, and often times we've seen the owner reprimand some of his waitstaff in front of customers - not really a fan of that. Mom and I have visited both New York Bagel locations and have always found the interior to be a little on the messy side, but perhaps that is because this restaurant always seems to draw a large crowd. Even the drive-thrus are always busy!

I love to eat different things, especially ethnic foods, so I was very glad that New York Bagel gave me a taste of something I'd never had before. I wish this yenta-in-training enjoyed her meal more, but I still appreciated the opportunity to try something new. I will definitely be visiting New York Bagel again, but to all our Jewish peeps, or anyone else who has this type of food on a daily basis, make sure to get that blood pressure checked! Oy vey!