To top off our visit to the Wayside Country Store, Mom and I decided to stop at Stephen Anthony's, a restaurant located at the very end of the long plaza. We were hoping to have a delicious meal, and - eventually - we did. 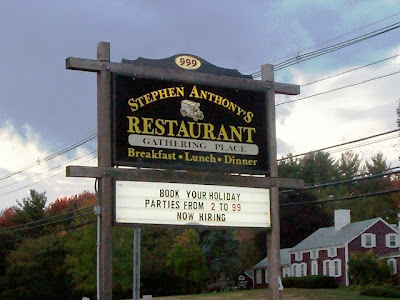 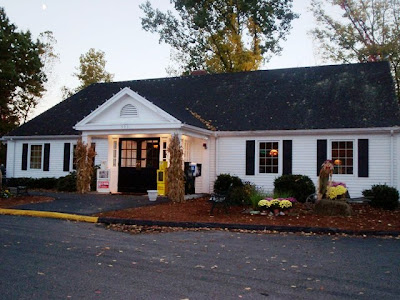 We stepped inside at around 4:30 p.m. A friendly hostess greeted us and asked if we would like a table or booth. Although I love booths, Mom chose a table. The hostess promptly brought us to a back table located next to a row of windows overlooking Hager Pond. After leaving us with two large menus and a list of specials, we were joined by a waitress who poured ice water into two glasses that were on the table and took our drink order. Mom chose a Coke while I had a Diet Coke. Mom was surprised and happy by the ice water because we almost never see this being done in restaurants anymore. The waitress explained that some of the specials on the list were not available, but she was going to check with the kitchen to make sure. She returned with our drinks and a basket containing a dish of butter and two steaming hot pieces of bread. She then informed us that the lobster casserole and the chicken and rice soup were no longer available. Thankfully, we were not interested in either. She gave us a few minutes to look over the menu. There were so many things to choose from, and when Mom and I made our decision, the waitress returned to take our order. Mom chose the fish and chips ($11.95), while I chose the classic Reuben ($7.95). After taking away our menus, I - unfortunately - noticed that there was a hair on my deliciously fresh bread ... and it wasn't one of mine.

Stephen Anthony's is a beautiful restaurant. With a lovely wooden bar with high stools, and chandeliers over each booth, it is both classy and cozy. I was able to see out of the windows overlooking the pond, which was beautiful - especially during the fall season. There were multiple antique pictures on the walls of what looked like local events in old New England. Although there were no table cloths, there were cloth napkins and our drinks were served in real glasses. The color scheme was mauve and beige, and the main light was being brought in through the beautiful windows. It was very clean, cool, and the waitstaff seemed to be very attentive to all of the customers. 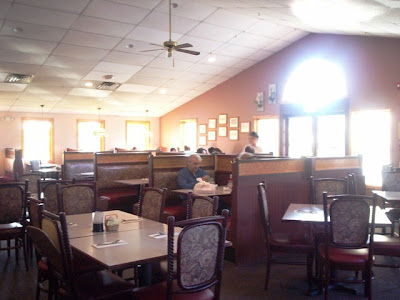 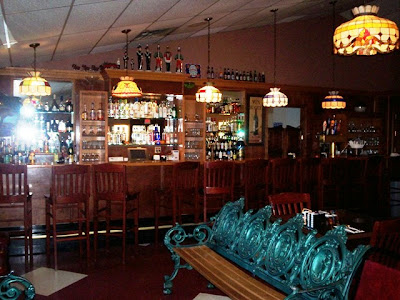 What I didn’t know about Stephen Anthony’s was that it is also specializes in homemade sausage. Serving breakfast, lunch, and dinner, customers will see that sausage is available throughout the entire menu. Breakfast choices include waffles, French toast, buttermilk pancakes, eggs, omelets, breakfast sandwiches, and specials such as the Country Benedict, Nor-Easter, and Anthony’s Famous Maple Sausage, which is two eggs any style with toast, home fries, and the homemade maple sausage. Lunch and dinner choices include soups ($3.50-4.95), appetizers (including a sausage sampler for $7.95), salads ($3.95-12.95), seafood, steaks, pasta, and sandwiches, including the homemade Italian sausage sandwich topped with fire roasted red peppers and served on a grilled bulky roll ($7.25). Featured items include the surf and turf ($21.95 with your choice of scrod, shrimp, scallops, salmon, sirloin, tenderloin, chicken, and pork chops), maple glazed chicken, grilled meatloaf, roasted sausage and potato, country baked ham, apple glazed pork chops, pork chops Lyonnais, and the roasted garlic rib eye, which is a 14 oz. choice French cut pan seared rib eye steak rubbed with fresh garlic and herbs and served with country mashed potatoes and fresh vegetables ($19.95). Stephen Anthony’s also has a dessert menu featuring a complete ice cream parlor, along with a children’s menu and a large list of both beer and wine. Due to the high demand, the maple sausage is available by the pound to take home or order. Also, this restaurant is famous for having unusual weekend specials. Guests delight in choosing from the many choices each weekend.

At about 5 p.m., a second waitress came over to our table. She was looking pretty down, and we were hoping that it had nothing to do with our food. We were wrong. She asked who had ordered the Reuben. When I said it was me, she told me that they could not make me one. I just stared at her for a few moments because about five minutes prior to her coming over to our table, I could have sworn I saw a Reuben sandwich get served to the table on my right. I even cleared my area because I thought that the waitress was going to bring it to my table. Still staring at the waitress, I asked to see a menu. Since I was really in the mood for a sandwich, I went with the chicken salad wrap ($6.95). This second waitress offered me a free dessert, but I politely turned her down because I had my fill of desserts at Esler's about two hours before. After taking the menu away, I saw her head over to the table on my right and heard her say, "So how's that Reuben?" I glared at Mom. I knew they had my Reuben!! How dare they use all their corned beef on someone else? Oh well. I had to be brave and suck it up. Besides, their chicken salad wrap sounded delicious. It was just odd that it took them 30 minutes to figure out that they wouldn't be able to serve me a Reuben.

Mom started to get concerned because her fish and chips hadn't come out yet. Perhaps they wanted to serve both meals at the same time, and we were hoping that Mom's fish wasn't going to be soggy when they finally presented me with my sandwich. Lo and behold, the food came out and everything looked delicious. Mom's fish and chips were very good. The fish was not greasy, which impressed her. The batter was very light and flaky, and more on the dry side than most. The fish itself was very moist, tender, and white. The fries were fantastic, crisp, and obviously homemade. It is really tough to get fish and chips that aren't greasy, but Mom was pleasantly surprised that this platter was just to her liking. Her meal came with a side of coleslaw, which she passed over to me. 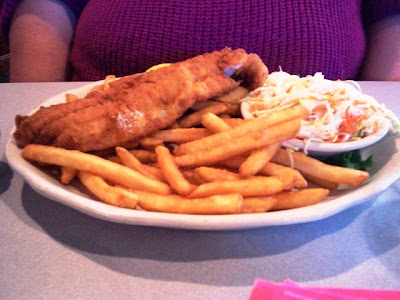 My chicken salad wrap was delicious. Included in the wrap were apples, walnuts, and raisins. The salad was wrapped in lavash bread with a lot of lettuce. There might have even been too much lettuce as I felt there could have been more of the actual salad. The cuts of chicken and apple were pretty bulky, and perhaps that was why they could not fit that much of the salad into the wrap. However, the sandwich arrived wrapped in a thin tissue paper, which made it easy to handle. The sandwich was cool, refreshing, and I loved the apples, raisins, and walnuts mixed in with the chicken salad. It was definitely something I'd love to order again, but I'd like to see a little more of the filling. I thought both the fries and onion rings were quite tasty. 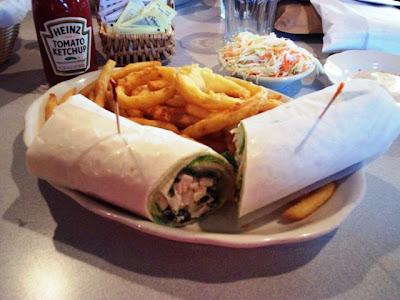 During our meal, our original waitress and the waitress that had both delivered the bad news about my Reuben and served our food had visited our table. Perhaps they were changing shifts, but I was wondering who was going to get my tip since they both had been serving us. I think at one point both of them came over to ask us how everything was, and we had no complaints. The second waitress came over to deliver the bill. Now in the back of my mind, I thought they might have given me a discount for waiting so long. The reason being that I turned down their free dessert offer. Either way, I did not receive a discount. No big deal. The bill came to:

While I was pulling out $28 to leave on the table for whichever waitress was handling the check, I noticed a name at the top of the bill - Nancy H. I believe that Nancy H. was our second waitress. What happened to the first woman? Either way, both staff members were very polite and attentive. I think that the whole mix up with the Reuben was probably the kitchen's fault. They should keep the waitresses informed of what they have and don't have.

Before leaving, Mom and I overheard a waitress inform a family of five (three of them children) that they no longer had any hamburgers. No hamburgers? How could a restaurant run out of ground beef? I actually thought that I heard a waitress tell another table the same thing about 30 minutes earlier, but I was hoping that I misunderstood. I was wondering how they were going to serve the meatloaf dish that I saw on the menu, but I guess that was something they were going to have to figure out before the dinner rush. Both Mom and I decided to visit the restroom before our long drive back to Fall River. The restroom was both clean and organized.

As we were leaving at around 5:45 p.m., we noticed that an enormous amount of huge geese had gathered in the nearby parking lot. We had read that these geese like to hang out by the pond, and we remembered that Esler's had a basket filled with day-old breads that you could buy to feed them. They were beautiful, but big. I'm not sure how brave I would be if I were feeding them and one decided to grab the food from my hands and take off with it. We watched them for a while before heading back to my car. I actually had to make sure that there were none behind my car when I was backing up, and I had to leave the parking lot through its second exit because the geese had decided to cross the road, and I didn't feel like waiting around until they all got to the grass. It was a funny way to end a fantastic day at the Wayside Country Store Plaza, and although not everything went our way at Stephen Anthony's, I do still want to try that Reuben. We'll be back.