For the second part of my birthday gift, Mom and I drove to Salem to spend the day sightseeing. After a guided tour through The House of the Seven Gables, Mom and I decided to visit America's oldest candy company - Ye Olde Pepper Companie - located just across the street. Featured on the Food Network, this company has been making candy here since 1806. Considering they've been in business for over 200 years, it was obvious that Mom and I were going to stop in for some of their famous treats. 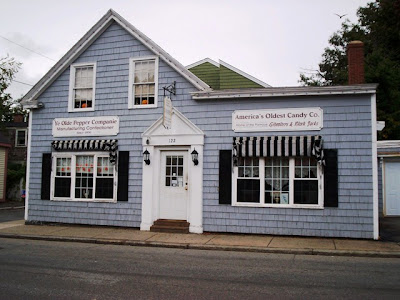 Although the building is small, it is very cute and colonial. Through the glass windows you can see into the kitchen where the candy is made using some of what looks like the original equipment. As we stepped inside around noon, Mom and I saw that the owners had dressed up the shop for Halloween. Lined with garland in a fall leaf design and covered with pumpkins and witches, the shop was neat and beautifully decorated. From the information I read on the Web site, I learned that the shop is owned by the fourth generation of the Burkinshaw family, who bought the shop from Mr. Pepper, who purchased it from the son of the original owner, Mrs. Spencer, who was shipwrecked in Salem on her journey from England in 1806. 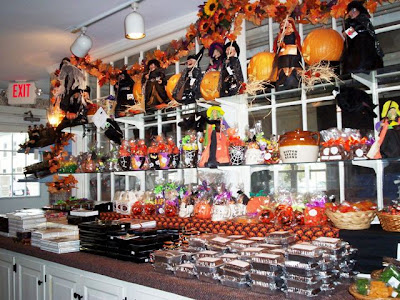 The two candies that they are famous for are the Gibralters and the Black Jacks. The first commercially made candies in America, they are still satisfying to the modern day sweet tooth. The Gibralters come in lemon and peppermint flavor and have a smooth melt-in-your-mouth texture similar to an after dinner mint. The gift box of Gibralters, made using the original recipe, contains six lemon and six peppermint ($11.98). Although we didn't see it, we later read that somewhere in the store is a jar of original Gibralters. Can you believe it? The Black Jacks are made with old fashioned black strap molasses. The sticks have a smooth, rich, long-lasting flavor not found in artificially flavored candies. Black Jacks come in a six ounce package consisting of approximately 10 sticks, and are also made by using the original recipe from the 1800s ($4.98). Also popular at Ye Olde Pepper is the almond buttercrunch, which is made from an old family recipe using the finest Grade A butter, and then hand-dipped in creamy milk chocolate and generously covered with freshly roasted almonds. A one pound box is $15.98, and a two pound box is $30.98. They also have homemade turtles (one pound box - $16.98; two pound box - $32.98), chocolates, truffles, and fudge (one pound for $8.99). Fudge flavors include chocolate walnut, penuche, peanut butter, creme de menthe, pumpkin, mudslide, and much more. In the center of the store, they also have treats like chocolate-covered marshmallow pumpkins, old fashioned hard candies like horehounds and root beer barrels, a selection of sugar-free choices, different flavor candy sticks, ready-made boxes of treats, chocolate covered pretzels, flavored squares, and daisies made with cashews and pecans topped with a white chocolate pumpkin. The treats that Mom purchased were:

We didn't get home until much later, and we were pretty excited to try our candies. The candy stick was just as I remembered from my childhood - very flavorful. The marshmallow pumpkins were sugary and sweet, and their chocolate tops were smooth and creamy. The chocolates were very good. The fillings were quite unusual - I had one that was cherry nougat, and Mom had one that was caramel peanut butter. It was interesting to see which flavor we were going to get, as none of them were what we expected. The fudge was outstanding! It had a very creamy consistency and was not sugary sweet. The pumpkin fudge had a pronounced flavor of clove, and tasted just like eating a slice of pumpkin pie. The mudslide had a lovely flavor of chocolate and cream - like a mudslide! This was some of the best fudge we've ever had. 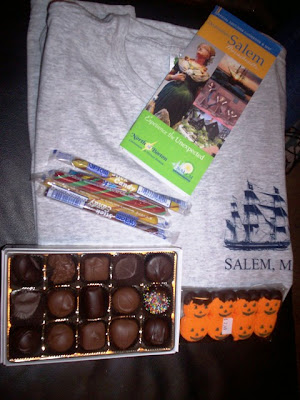 
We had a great time at Ye Olde Pepper Companie, and we were glad to have visited America's oldest candy company. It was fun seeing the old equipment through the glass encased kitchen, and if you can't get to their stores, you can place your order for their famous Gibralters, Black Jacks, or some of the other goodies on their Web site. You won't be disappointed!

Check out the slide show to see what else we saw in Historic Salem: