Bite of the Week - Skor vs. Heath 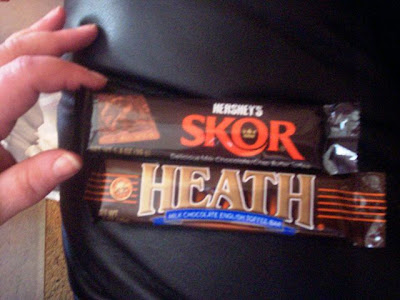 Since Rite Aid was having a huge sale on various items (candy being one of them), Mom and I decided to stop in to see what they had left. When we hit the candy aisle, we noticed the Skor and Heath bars. Oddly, they were much smaller than I remember.

RANDOM RANT: I'm so sick of food companies ripping people off! I'm sure you all heard about the recent Cadbury Egg debate (they've suddenly gotten a lot smaller). If you don't believe that you're getting ripped off, pick up a half gallon of ice cream. You'll find that they don't even MAKE the half gallons anymore!!! I think they're all like 1.7 quarts or something (not the two quarts you would need to make the half gallon). Stop screwing us over! If you're going to take away the food, then lower then price!

Still in shock over the size difference in these candies, Mom headed to the register and paid $.33 a piece for our treats. Gotta love a sale! Mom and I were going to just split them and have them all to ourselves, but I suggested a taste test to see which bar of chocolate covered toffee we liked the best. Previously, I conducted my own Skor vs. Heath taste test in the parking lot of the Pick N Pay in Bristol, RI. I felt that Skor was the better of the two. This time, Mom got involved.
<
THE VERDICT: Although Mom and I like when there are Heath pieces mixed in with our ice cream, we both prefer the Skor. Mom thinks that Skor is much more flavorful. She said that you can really taste the butter toffee, whereas the English toffee used in the Heath bar is pretty flavorless. Because of this, the dominant flavor in the Heath bar is its chocolate coating. However, the Skor's chocolate coating takes a backseat to the delicious toffee center. Another point in Skor's favor is that the bar is 10 calories less than a Heath bar. Hooray for Skor!
Posted by New England Bites at 4:00 PM