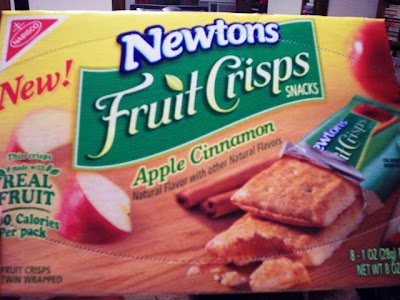 Mom and I love trying new things, so when we were at Wal*Mart this Saturday and spotted the new Newtons Fruit Crisps, we just had to buy them. At first we didn't know what they were all about. Was it like a Fig Newton? Was it crispy? Did it taste like crap? After finally deciding that this would be our Bite of the Week, we grabbed a package out of the box and tried it for ourselves.
THE VERDICT: Fruitastic! We purchased the apple cinnamon flavor, and were both happy with the delicious apple filling that was inside each crisp (there were two in the package). Each crispy wafer was lightly dusted with sugar and cinnamon, and together both crisps were only 100 calories. These fruit crisps are definitely something that I look forward to having on my break at work, or as a snack when I'm looking for something low-cal and tasty. Mom said that it had a very light, clean flavor, and was glad that they are quite nutritious. We look forward to trying to the other flavor that we saw - mixed berry. It's not a cracker; it's not a cookie; but whatever it is, I'm sure you'll enjoy this fruity snack. We did.
Posted by New England Bites at 10:00 PM