938 Lee's River Avenue
Somerset, MA 02720
(508) 673-3513
<
"I'm going off the rails on a crazy bagel train!" -- Laura channeling Ozzy Osbourne.
<
Why did it take an article in The Herald News to get Mom and I to visit the Bagel Express Cafe? We had been meaning to go for ages, so when we saw that the local paper had reviewed the place before we did, Mom and I put our foot down and rushed right over. We pulled into the parking lot at around 11:30 a.m.
< 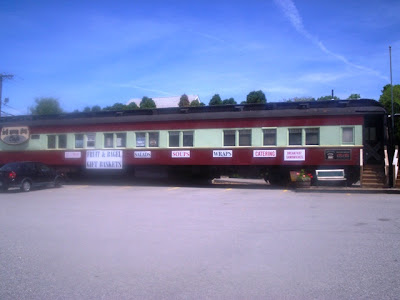 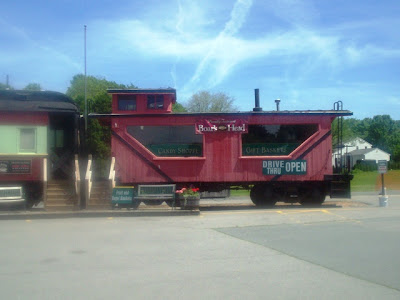 <
What can I say? It's an actual train on actual train tracks. Adorable! There is a separate "caboose" which either contains more dining space or storage, and the restaurant even has a drive-thru in the back. Since we were dining in, Mom and I went up the wooden staircase and shoved open the small door (those old train doors are heavy). There is a cute railroad crossing sign just as you enter.
< 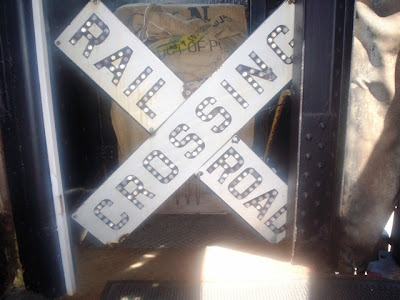 <
Oh man, this place gets cuter by the second. Not only does it look like an old fashioned train, but it looks like a small cafe/bistro as well! It is beautifully decorated with lots of antique pictures and knickknacks all over. Above the seats in the dining area are several antique suitcases resting on the overhead compartments. Beautiful curtains dress the train windows, which are separated by lighted sconces. The wooden tables and chairs are quite comfortable, and the oldies station piping in through the speakers kind of makes you feel like you're sitting in someone's home rather than in a restaurant. It's a very relaxed atmosphere. They also have one of the smallest bathrooms I've ever seen, but what do you expect? It's a train!
< 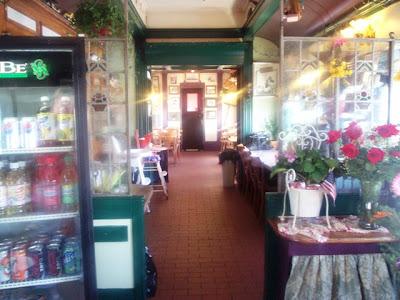 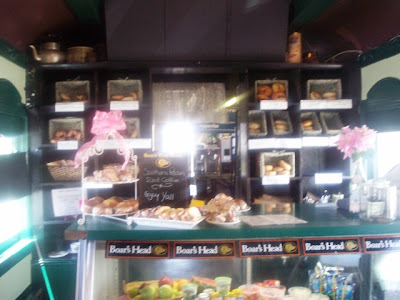 <
When we got to the front of the train, we checked out what they had to offer. There is a chalkboard that lists all of the cream cheeses and spreads offered, as well as a few boards that list the daily specials. Mom spotted a sign that read that the bagels come from Bristol Bagel Works - one of our FAVORITE places. They have the best bagels and muffins. We're still wondering if the muffins carried at the Bagel Express are by BBW as well. If they are, we already know that they're fantastic. There were other assorted goodies like cookies and brownies sitting out the counter, and inside the deli case were several drinks, fruit cups, Boar's Head deli meats, and wraps. When Mom and I finally decided what we wanted, we placed our order with two very pleasant women. Mom felt like having breakfast, so she chose a wheat bagel with bacon, egg, and cheese ($4). I felt like having lunch, so I went with a spinach bagel with cheddar cheese, lettuce, tomato, and Willow Tree chicken salad ($6.75). I was asked if I wanted a pickle with that, and of course, the answer was yes. One of the women told us that she would bring the food out to our table. We also ordered two of their featured iced coffees - Southern Pecan ($3.05 each). Our total came to $16.54, but we didn't pay until after we finished eating. Mom and I took a seat under two vintage suitcases and waited patiently for our bagels.
< 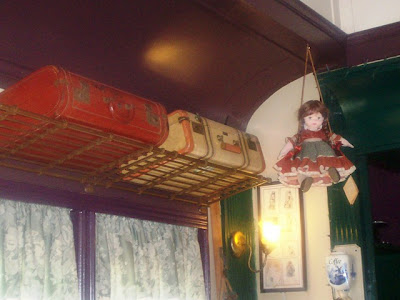 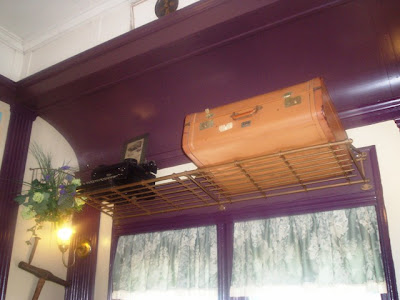 <
One of the women brought out our sandwiches in small baskets. They both looked great. Mom said that her sandwich had a lot of flavor. Sometimes bagels don't really have that much taste, but this bagel was excellent. The inside of the bagel was moist while the outside had a nice chewy texture. The thick bacon, along with the egg and cheese, was cooked perfectly. Mom also mentioned that the sandwich was well put together, as she wasn't covered in bacon grease while she was eating it which unfortunately happens with a lot of breakfast sandwiches. It was the perfect way to start her day. Oh, and we both adored the Southern Pecan iced coffee. It really had a lot of flavor and tasted exactly like pecan!
< 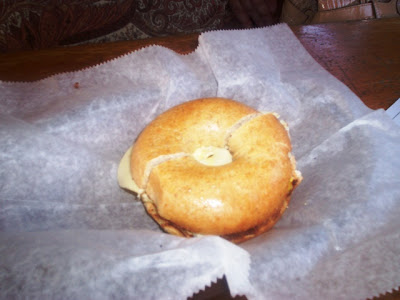 <
Like Mom's, my sandwich was excellent. At first I was bummed because I spotted an Asiago cheese bagel after I had already requested my sandwich be on a spinach one, but I was very glad that I stuck with my original choice. All of the ingredients, including the bagel, were extraordinarily fresh and tasty. It was a little harder to eat than Mom's sandwich, but I worked it out. I didn't leave a single drop in the little plastic tray. It was the perfect size and I was very happy to have ordered it.
< 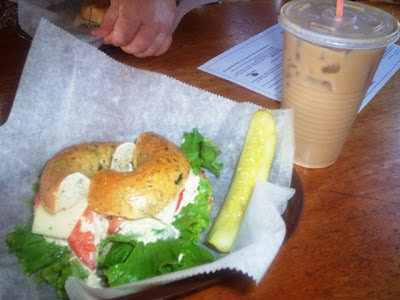 <
The Bagel Express Cafe does a fantastic thing. They put together gourmet bagel and fruit baskets - and then deliver them! Of course, you could probably pick it up yourself, but still. You could even get personalized catering and party platters. This is the perfect thing to bring to a party or an office shindig when the usual stale donuts aren't cutting it anymore. The prices at Bagel Express are average, and you can order bagels by the dozen and cream cheese and coffee by the pound. Sandwiches range from $6.25-6.75, and specialty salads range from $5.50-7.25.
<
After paying, we bid farewell to the Bagel Express Cafe for the time being. We knew we would be back very soon. Cut to Monday morning when we went back for seconds! This time, Mom had a French toast bagel sandwich with bacon, egg, and cheese, and I had the most delicious breakfast sandwich ever - an Asiago bagel (I finally got one!) with sundried tomato cream cheese, roasted red pepper, egg, and cheddar cheese. There may or may not have been bacon in the sandwich, but I ate it so fast that I forgot. Either way, it was absolutely scrumptious. Cut to Friday morning, where I picked up a chocolate chip bagel with strawberry cream cheese for me (they had run out of banana - aw shucks!), and a French toast bagel with maple walnut cream cheese for Mom. All this while guzzling down big cups of Southern Pecan. The owner even threw in a brownie for good measure, and it was awesome. We absolutely ADORE the Bagel Express Cafe. What are you waiting for? You should go now. Wait in the parking lot. You'll probably see me there ... drooling.
<
The Bagel Express Cafe is open from 6 a.m. to 2:30 p.m. Monday through Friday, and 7 a.m. to 1 p.m. on Saturday and Sunday.
<
PS - Hey, Bagel Express! If you want more vintage suitcases, visit Vinny's Antiques Center in Seekonk, MA. It's one of our favorite antique stores. We saw PLENTY of suitcases and they were priced very well!
Posted by New England Bites at 11:00 PM