Baskin Robbins - What the F? 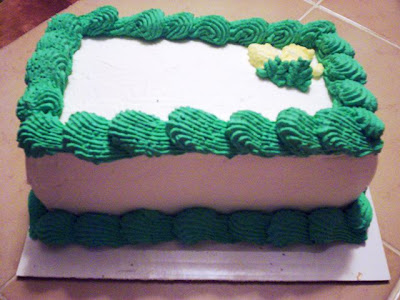 Remember the review I did on Baskin Robbins back in May 2008? Well, if not, click here. The gist of it was that although the ice cream cake was good, the frosting consistency had drastically changed. It was soft and mushy versus the normal ice cream frosting that my family had been eating for years. I decided that it may have just been the particular "special order" cake that we had requested, so today I made a spontaneous decision to drop by the Somerset location to pick up an experimental cake from the freezer. The cheapest one I found that was topped with the frosting in question was $15.99, and was made of white cake and pralines and cream ice cream. One of our favorites! When I walked the cake to the car, I noticed that the frosting looked whipped instead of frozen. Oh boy, here we go again. 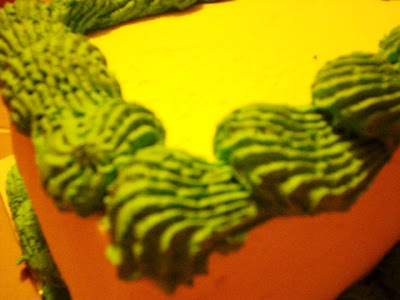 Close up of said frosting.
After dinner, when Mom cut into the cake, she noticed that it was very easy to cut. Too easy. Normally, she would have just about broken her wrist trying to get the knife through the ice cream and the frozen frosting. Not today! The knife went through like buttah. When I grabbed a piece of the thick, green frosting that had lined the edges of the cake, I was disappointed. It was whipped frosting. It was soft and a little on the warm side. Mom said that it seems as though Baskin Robbins has created a frosting that doesn't freeze, because it remains soft both on top of a log of ice cream and after being kept in the freezer. Did people complain about the severity of the frozen frosting? Did Baskin Robbins receive a lot of bills for sprained hands and carpal tunnel diagnoses? Who cares?! That was the fun of eating a Baskin Robbins ice cream cake!
< 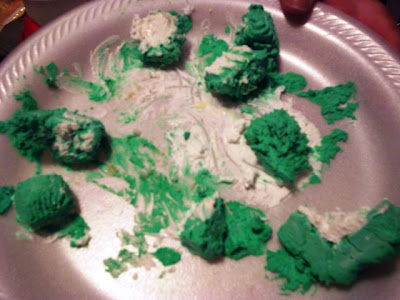 Soft and mushy? That's not the real frosting!

I usually frown upon frosting. I find it too sweet and it's really just not my thing. However, the Baskin Robbins frosting used to be my all-time favorite. It was the only frosting that I loved to eat, and I used to request to have my birthday cakes from there just to get a taste of the sweet stuff. Now, I'm limp with dissatisfaction. Yes, the cake was good, but it just wasn't the same. I want the old frosting back. I wonder - could it be the location? Is Somerset using a different frosting than all the rest? They shouldn't be because I think all the Baskin Robbins locations should be using the same frosting recipe. Maybe the nice people at the Baskin Robbins headquarters could send us a cake with the real frosting so that we could reminisce and fall in love with them all over again (I hope, I hope, I hope). We miss the fragrance and the added flavor that the frosting used to provide, making the Baskin Robbins brand very recognizable and special. Either way, we like the cakes, but we don't love them. Not like we used to. *sigh*
Posted by New England Bites at 7:00 PM