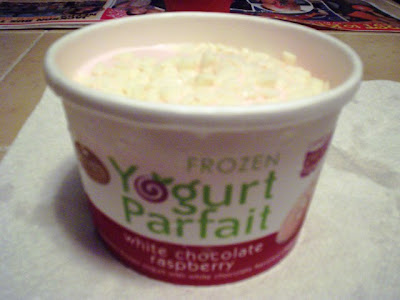 Every Saturday night, after a long day of shopping, Mom, Dad, and I usually "reward" ourselves with a pint of ice cream. We've been having pints of ice cream on Saturday nights for years, but now that I'm trying to change my eating habits, I've been opting out of the weekly pint regiment. I'll admit, sometimes I slip up and get one, but I always try my best to go without. A few months ago, Mom and I discovered these tiny frozen yogurt parfaits by Kemp's located right next to the ice cream pints. Although it did have a lot of sugar, it was much smaller than a pint and had a very low fat content. This could be the answer to all my prayers! A smaller, lower-calorie frozen treat to eat on Saturday nights. Over the past few weeks, I've gotten to try a lot of the flavors and my favorite - for now - is the white chocolate raspberry. Tonight, after a long day of healthy(ish) eating, I decided to reward myself with a cup.

THE VERDICT: Awesome. It's small, tasty, and low in fat. This particular cup consists of a tangy, creamy raspberry yogurt topped with a layer of tiny white chocolate pieces. I like to mix in the white chocolate so that I can get the flavor of it with every spoonful. It really is delicious, and the other flavors - some of which include real fruit - are really good as well. When you're trying to change your eating habits, it's good to take baby steps. I'm glad that I've found something to eat that's just as delicious as a pint of ice cream, but won't ruin a long day of diet and exercise. Hooray for Kemp's!
Posted by New England Bites at 12:00 PM