Mom and I have been going to Allie's Donuts for a few years now, ever since Mom first read about them on Roadfood.com. After much request for us to pay them a visit, and after one of our fans - Dawn - moved from Rhode Island to Connecticut where this bakery is NOT, we decided to get some so that we could rub it in her face finally do an official review. Plus, I was having major cravings for their delicious chocolate cake donuts. After some errand running, I got on the highway and drove all the way to North Kingstown and arrived at Allie's at 1:20 p.m. 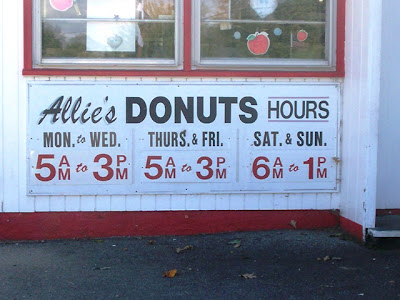 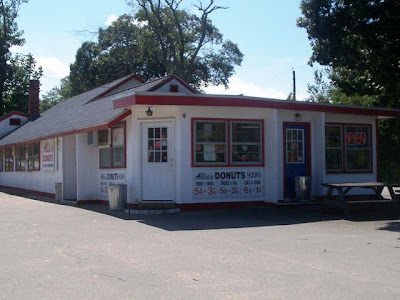 For some reason, there are three doors that get you inside this bakery. I chose the middle one and was soon faced with several shelves of muffins, cupcakes, and of course, donuts. Allie's Donuts come in all varieties - everything from colorful sprinkles to jelly - and are made from scratch. When you first walk in, all you can smell are the fresh baked goods. It's quite intoxicating! There was one other customer ahead of me (this is a standing room only kind of place), but she was done fairly quickly and in a flash I was thrust into ordering mode. Since I wanted one of everything, I had no idea what to pick. Mom had instructed me to get a dozen, so I just started choosing. I chose: two chocolate coconut, two chocolate, and one strawberry frosted, maple frosted, old fashioned, cinnamon, Boston creme, toasted coconut, coconut, and chocolate with white frosting. As the very friendly assistant boxed my donuts, I decided to take a picture of the case. Since the place is small, and there was really nowhere for the assistant to go, I had to ask her to move out of the way so that I could get a shot of the donuts. I've never had to do that before, and I thought she would wonder why I was taking a picture of the donuts, so I told her about the soon-to-be jealous Dawn who will be drooling somewhere in Connecticut at the sight of my picture. She laughed and told me that her sister - who has also moved out of the area - is jealous that she is now working at Allie's. I asked her if it was hard working around all the lovely pastries, and she said that it was! 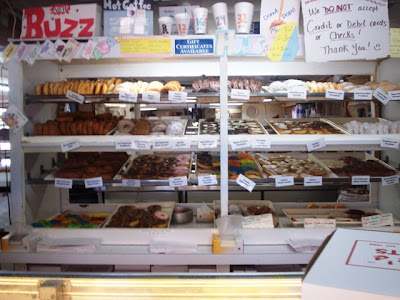 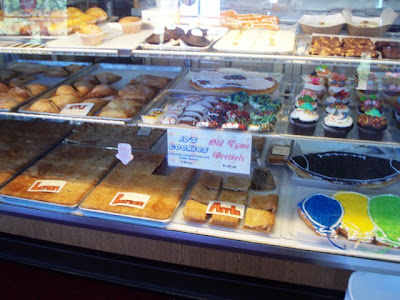 Other items at Allie's include squares, donut pops (chocolate covered donut pieces on sticks), cookies, tarts, and donut cakes, which are hubcap-sized frosted donuts. They always look fantastic! They also serve coffee, but beware - no credit/debit cards are accepted here. Cash only, people!<
Before leaving, and before the clerk tied up the pastry boxes, I asked her to remove one chocolate coconut donut and place it in a bag so that I could eat it on the ride home. I was starving, and the smell of the donuts was just too overwhelming for me. She happily put my donut in a bag and gave me a price on the dozen - $7.20. That's about the same price as a box of donuts from Dunkin' Donuts, but these are much bigger and tastier. After I paid, I wished the clerk well and went out into the parking lot to take some photos. As I drove up the street, I reached into the bag and pulled out a piece of the donut. Oops! I didn't realize that it was going to be as fresh as it was, so I had to shove it all in my mouth to keep it from crumbling. This whole scene - which took place in the breakdown lane near the highway on-ramp - sent coconut flying all over the inside of my car. See below. 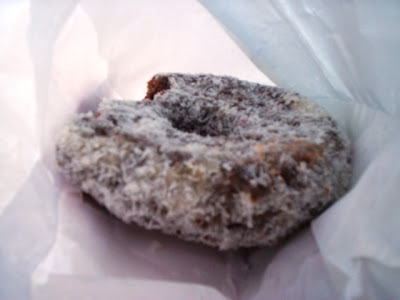 My delicious chocolate coconut donut that never made it home.
< 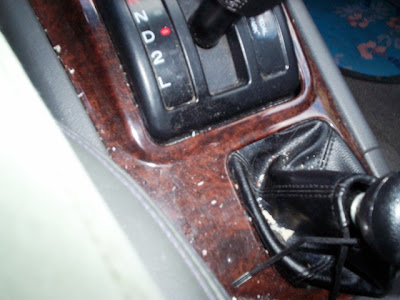 My coconut filled car.
<
When I got out of the car, I brushed about a thousand pieces of coconut off my shirt and brought the donuts upstairs. Both Mom and I oohed and ahhed over them and picked out what we wanted to have (I was a pig and wanted a second donut right away). Over the next few days, Mom, Dad, and I had devoured both boxes. These are Mom's favorite donuts next to Kane's in Saugus, MA, and that's very high praise because Kane's are the best around. Allie's Donuts are definitely worth making a side trip to get, but make sure you get there early because they shut down in the middle of the afternoon. If you're late, you lose! Allie's has a wonderful variety of donuts, including some that you don't ordinarily see. They're all large, fresh, and always tasty.
< 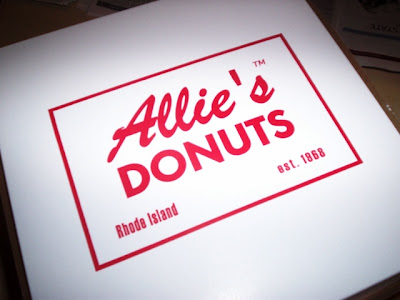 <
Hopefully Dawn is still a fan after reading this review. Perhaps she's somewhere on I-95N making her way to Allie's right now. Dear staff: if you see a hungry gal with a Connecticut license plate waiting in the parking lot when the bakery opens at 5 a.m., you have us to thank.
<
Allie's Donuts is open from 5 a.m. to 3 p.m. Monday through Friday, and 6 a.m. to 1 p.m. Saturday and Sunday.
Posted by New England Bites at 8:00 PM