About a month ago, the Nasoya company contacted us and asked if we would like to feature their line of healthy, natural products in our Bite of the Week section. Mom and I are always up for freebies, so when we received the coupons that the Nasoya representative had sent, Mom looked up some recipes on Nasoya.com so that we could make something out of these great products. I almost dropped dead when Mom said that she'd like to try the baked spinach ravioli, which included both spinach and tofu - two things Mom has never had ... and has never wanted to. I mean, she had a sandwich wrapped in a spinach pita once, but that was about it. Of course, I was all for it as I adore both spinach and ravioli. Mom and I planned on making one meal and one dessert, so we also wrote down the ingredients to create apple cinnamon rolls. After tracking down the Nasoya products in the refrigerated natural foods section of the market, we grabbed the rest of the stuff we needed (and definitely spent some money there) and went home to create our dishes. The Nasoya products purchased included firm tofu, and egg roll and won ton wraps.
< 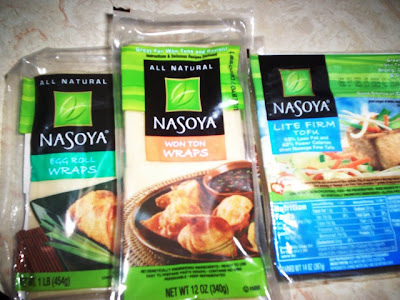 <
Now, we followed the recipes exactly, but it took us a lot longer than we expected. That was probably because we were cleaning up spilled things, crimping ravioli edges to death, and rinsing the spinach-covered mixer. Most people could probably do these a lot faster. Let's start with the main course - the baked spinach ravioli. You'll need one package of Nasoya Won Ton wraps, one package of Nasoya firm tofu, 10 ounces of fresh spinach, 15 ounces of ricotta cheese, three quarters of a cup of grated Pecorino Romano cheese, one teaspoon of salt, and a half teaspoon of ground black pepper.
< 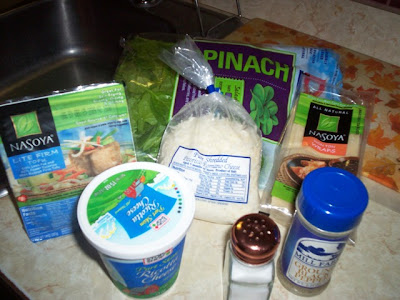 <
First, I put the spinach into a bowl and poured two tablespoons of water on it. Then, I put it in the microwave for five minutes so that it could wilt. NOTE: Your house will stink, and you will find that spinach is a huge ripoff as it shrinks to a quarter of its normal size when wilted.
< 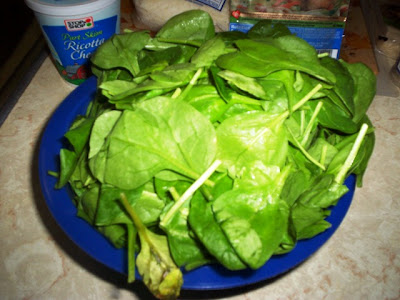 <
Next, take your wiggling, jiggling tofu, slice it up, and chuck it into a food processor and pulse until it is pureed. After I figured out what that meant, it got done.
< 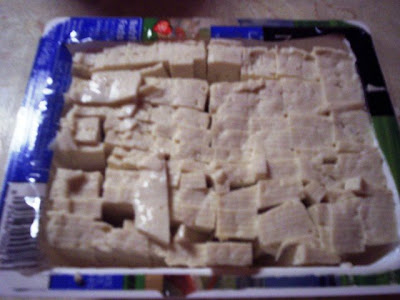 <
After the tofu has been pureed, add the ricotta cheese, blend the two together, and then add the drained spinach and Pecorino Romano cheese. Process until smooth. NOTE: My food processor was too small, so I had to do this in batches. It was a pain in the butt, but I got over it. It was better than having sloppy mush all over my house.
< 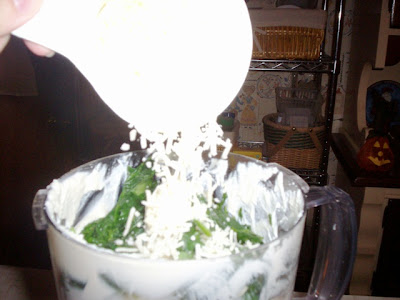 <
What you'll end up with is a big bowl of thick, green paste. Don't worry, though. It's supposed to look like that. Don't forget to season with salt and pepper.
< 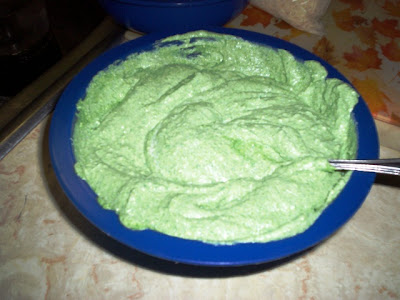 <
The next step turned out to be a huge pain, but thanks to the durability of the Nasoya Won Ton wraps, Mom and I did not come to blows over the simple task of making homemade raviolis. Take two won ton wraps, place two tablespoons of the filling in the center of one wrap, wet the edges of that wrap, and then place the second wrap on top. Crimp the edges with a fork (don't make holes) and/or your fingers to make the two wraps stick together. Now, we found that two tablespoons of filling made the two wraps hard to meet, so we improvised and just put in what we could to get the two wraps to close properly. We had three baking sheets going - all for 12 minutes at 375 degrees. Before putting them in the oven, I brushed the raviolis with a light layer of olive oil.
< 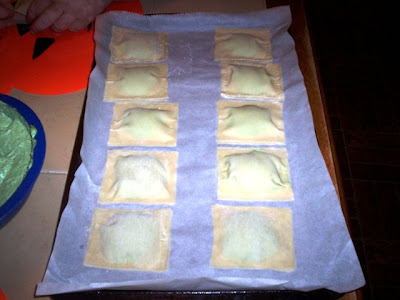 <
When they came out of the oven, they were lightly browned and none of them had exploded (our biggest fear). Although some of them could have used more filling, we found it hard to fill them by hand. You may want to stretch out the top wrap before putting it on the bottom, allowing you to stuff more filling inside. Mom served them with a marinara sauce (a.k.a., Ragu) for dipping, and my family had them for dinner (that recipe certainly made enough).
< 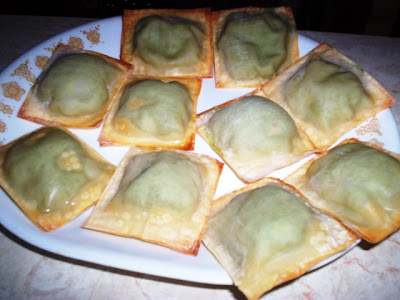 <
Well, Hell must have frozen over because my mother was eating spinach. Also, my father was unknowingly eating tofu, which we told him about a few days later (we were afraid that he would get all snotty about the tofu if he knew it was inside). The taste of the raviolis was great. The filling was not watery, which Mom was afraid of, and it had an overwhelming ricotta flavor. The wraps were thin, crisp, and very strong considering we beat the Hell out of them during the assembly process. We would definitely make them again, but we'd need to set aside a few hours.
< 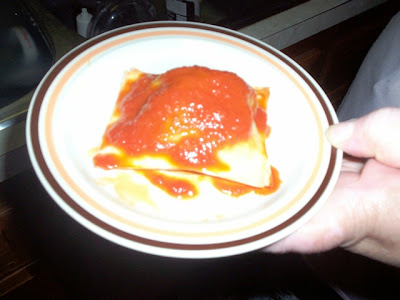 <
Although we were exhausted, we still insisted on making dessert. To make the apple cinnamon rolls, you'll need one package of Nasoya Egg Roll wraps, one 12 ounce can of apple pie filling, four ounces of room temperature water, a half stick of melted whole sweet butter, a half cup of confectionery sugar, a quarter cup of ground cinnamon, and a pinch of nutmeg.
< 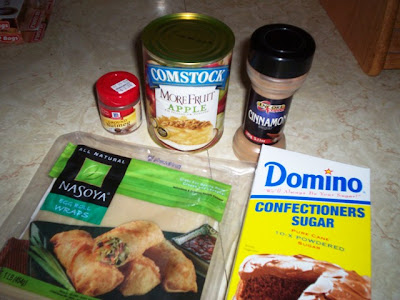 <
Preheat the oven to 400 degrees. Take the wraps and lay them out so that the are shaped like a diamond. Place a level tablespoon of apple filling in the center of the diamond. NOTE: We bought a 21 ounce can of filling because that's all we could find, so needless to say we stuffed these rolls with every apple we had.
< 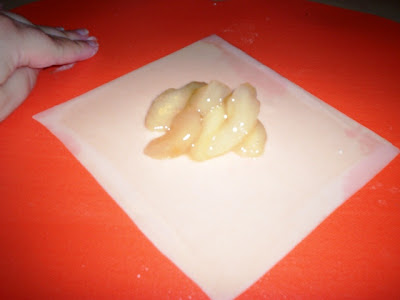 <
Next, wet your finger and trace the edges of the wrap so that they become wet. Fold both sides of the wrap over each other, and then roll it up (from the bottom to the top). Place them on a baking sheet and bake them at seven minutes or until lightly golden brown.
< 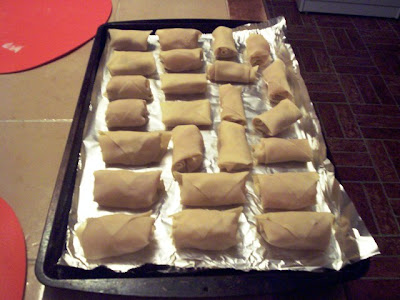 <
Now, we had some issues with our oven, so we had to leave the rolls in a little longer because they were not browning. During this found time, I made the topping. I melted the half stick of butter, and mixed the cinnamon, nutmeg, and confectionery sugar together in a bowl.
< 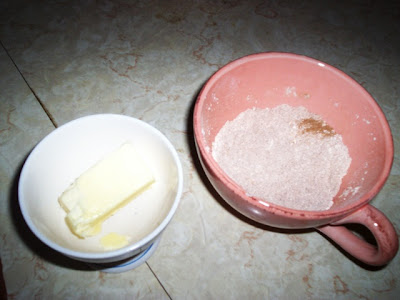 <
When the rolls were finally ready, I brushed them all with a light layer of butter, and then generously (very generously) sprinkled on the topping. The rolls turned out great! They were sweet, and the added toppings really gave the plain wrap a really tasty flavor. Mom likes that the wrap wasn't too crunchy, and we both enjoyed that this particular recipe was really simple. They even tasted great the next day!
< 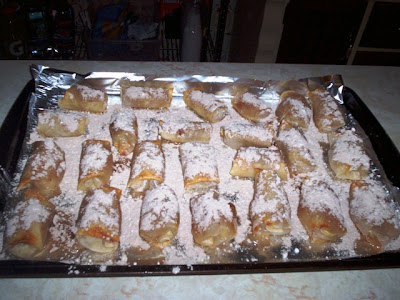 <
Wow, I'm tired just typing this. We really worked hard on these recipes, and thankfully the Nasoya wraps were really easy to deal with - and delicious! Mom and I would definitely buy them again, and we'd like to thank the people of Nasoya for introducing us to their fabulous products. If you haven't tried them already, please go out and get some today!
Posted by New England Bites at 10:00 PM