The Oriental Chow Mein Company is back! Get your noodle on!

Click here for the original story posted on The Herald News Web site.
< 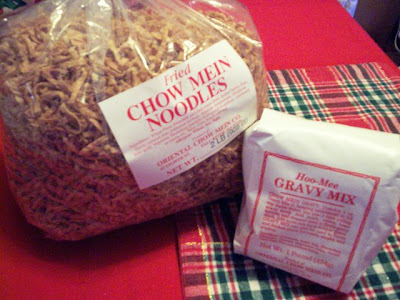 UPDATE: On Saturday, December 5, in the middle of a heavy downpour, Mom and I headed out for a big bag of noodles and some gravy mix. Now, having never purchased the noodles and mix directly from the Oriental Chow Mein Company before, we weren't sure what it looked like inside or what size the noodle bags came in. After some drama with trying to find a parking space in the extraordinarily tiny lot, Mom and I stepped inside. Basically, the set up is pretty much just a production room with several boxes of noodles scattered around, and a cash register sitting on a small counter. After the customers in front of us headed out the door with their purchases, we stepped up to the counter to place our order. Mom told the male employee that she wanted to get a one pound bag of noodles. He retrieved them from a nearby box, but as he walked over to us Mom realized that she wanted more noodles. "Make that a two pound bag," she said. He reluctantly walked back over to the box to change the bag's size. "Now, does the gravy packet come inside the bag, or is that a separate purchase," asked Mom. Remember, we have never ordered the noodles this way before. We either get them at a restaurant, or buy the little yellow boxes in the supermarket. To our horror, the irate man shouted, "EVERYTHING IS SEPARATE!" What the Hell was he yelling for? Mom wasn't being annoying; she was simply asking a question. "Um ... OK," said Mom. "Would one packet of gravy be enough for this two pound bag?" "NO!!!!!!" He shouted, angrily. "You're gonna need about four or five packets for that bag!" I was boiling at this point. He was beyond rude. Mom, still keeping her cool, then asked for enough gravy packets to satisfy her two pound bag of noodles. The man reached into a nearby box and pulled out a one pound packet of gravy. Mom asked, "Will this be enough?" "NO, this is enough for TWO two pound bags," he screamed. Mom gave up and purchased the one pound gravy packet and the two pound bag of noodles. Just when I thought he had finally finished yelling, Mom asked him how much her total was. "NINE DOLLARS!!!!" I cannot believe he yelled the price at her. What a jerk. We will never go back there to get noodles. Thankfully Lees Market in Westport carries the bags of noodles, because we do need to get another to go with our extra gravy. That man was one of the rudest people we've ever encountered, and when we left the store, Mom said that she should have thrown everything back on the table and told him off. However, we really missed the chow mein and wanted some for Sunday's dinner. Either way, the noodles were fabulous and we can't wait to have them again. We'll just have to find other ways to get them because we will NEVER go back to the Oriental Chow Mein Company.