The second in a series of local farm and farm stand reviews by New England Bites. 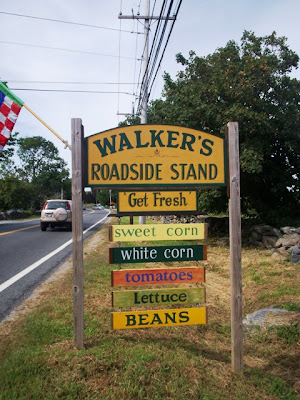 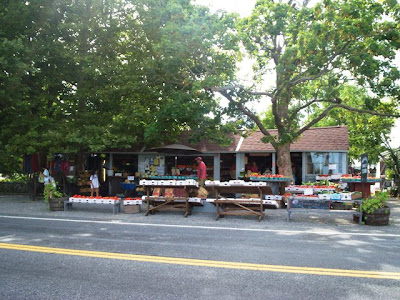 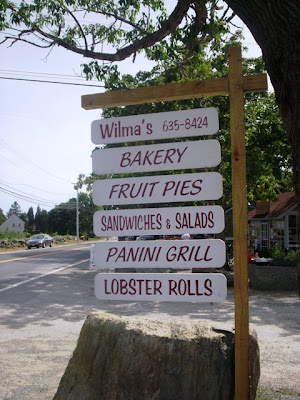 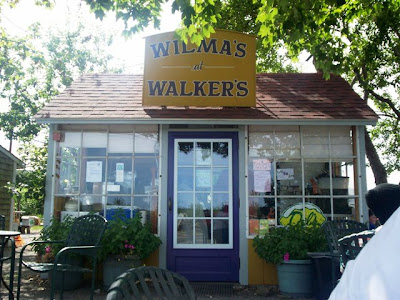 This Saturday found us on the long country road that leads to WALKER'S ROADSIDE STAND and it's companion building WILMA'S AT WALKER'S . We'd driven by here before but had never stopped in. It looked adorable from the outside and depicted a postcard perfect New England farm stand. However what caught our attention most was the sign informing us that WILMA'S was a bakery and sandwich shop. Sold ! We knew we'd be back. 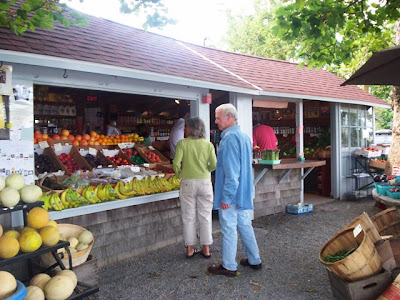 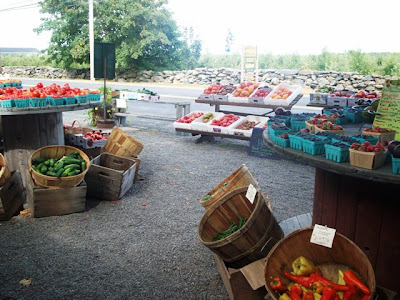 We pulled into their parking area around 3 p.m. It was very busy. People were scurrying around us with brown bags filled with sweet corn on the cob, heirloom tomatoes ( of which there were several varieties ) , large cukes , summer squash & zucchini and plums, berries and greens ( just to name a few of the many items offered ). There were also little sheds that housed some grocery items and cold drinks. 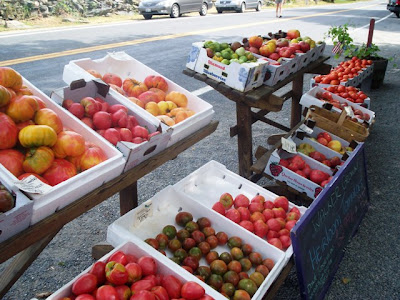 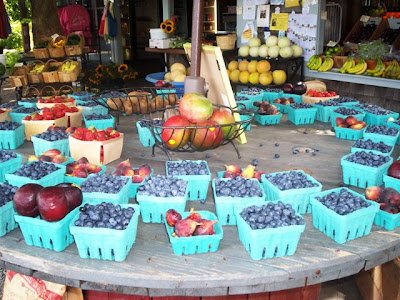 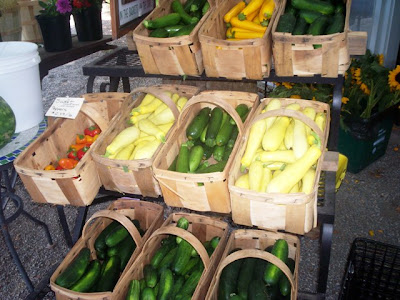 It was so busy when we first tried to look around that we decided to give up and go into WILMA'S to grab some lunch and look over their baked goods. We'd come back to the stand later to make our purchases. 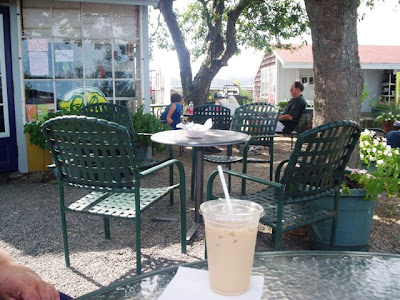 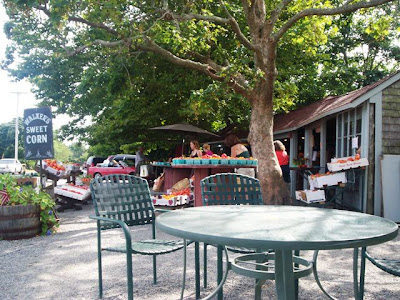 We walked over to WILMA'S door to find ourselves at the end of the line. This place is teeny ...and packed. We squished and flattened ourselves in and took our place . While we waited we looked over their sandwich menu . For $7.50 you could build your own sandwich with several choices of meats ( roast beef, ham , turkey, several different chicken salads, tuna salad ) cheeses ( provolone, Swiss, boursin etc. ) all kinds of condiments and garnishes ( mayos, mustards, hot peppers, red onions) and your choice of bread ( wraps, flatbreads, wheat, french rolls ) . Or you could get a hot panini on flatbread already suggested ( classic mozzarella, tuna melt, capicolla, turkey Reuben or pizza ) or build your own , all for only $8. They also have a lobster salad sandwich for $14. And they also have ready to eat soups, salads and quiche in the refrigerated cases that line the walls. 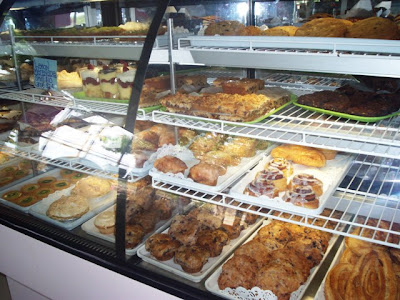 While waiting for our sandwiches to be prepared , a young man asked what we'd like to drink . We both decided on an iced coffee. So he hands us 2 cups of ice and points us in the direction of the coffee station.....right as you come in the door. ARE YOU KIDDING ! As we were trying to hurry and make our drinks ( very stressful ) we were totally in everyone's way . People trying to come in and people trying to see the bakery case ( more on this later ) were all bumping into us making our coffees. We hurried out of there ( with our drinks after telling the sandwich girl where we'd be) and got a nice little table (with the most uncomfortable chairs ever) outside. 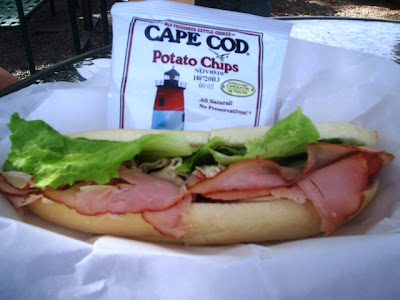 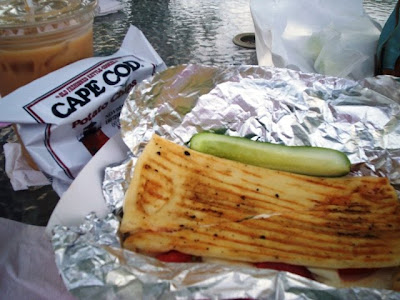 After a very short wait , the girl brought out our lunch. Laura had decided on the fresh mozzarella panini with tomato and basil . It automatically came on flatbread which turned out to be a mistake because the bread got very wet from the juicy tomato. But Laura put messiness aside and found the taste really terrific. I built my own sandwich with roast turkey , provolone cheese , lettuce ( and I thought I could get some black forrest ham thrown in ....but no...only 1 meat per sammie ) on a lovely french roll. But then the girl had informed me that they didn't have the right amount of turkey for my sandwich and I could fill it with another meat . You guessed it . I got my ham. And my sandwich was fantastic. So fresh and tasty . I'd get it again. Both sandwiches came with a small bag of Cape Cod chips and a pickle ( I threw mine at Laura , you know my pickle phobia ) . And the ice coffee was just delicious . You know it was good because I actually finished it and didn't have it for 2 days like I usually do. It cost us $21.07 for our entire lunch. 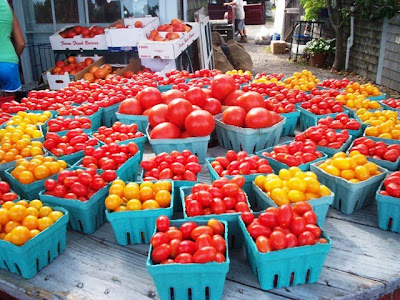 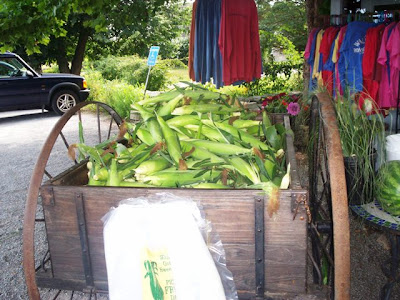 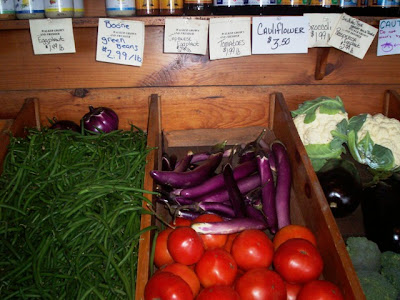 So now that we'd eaten ,we decided to attempt the farm stand again and actually buy something . It had died down a little so I was able to shop with ease .The fruits and veggies were so fresh and beautiful and they had quite a selection. I bought a huge bunch of grapes ( so sweet ) , 3-ears of corn, 4-yellow squash and 2- ebony plums. It came to $10.60 . Laura put our purchases in our cooler bag while I attempted to go back into WILMA'S and check out the baked goods. 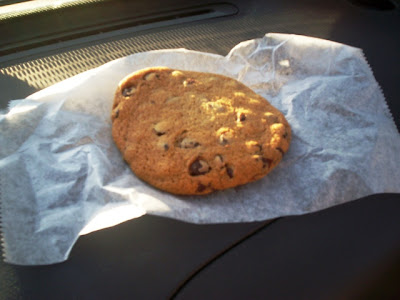 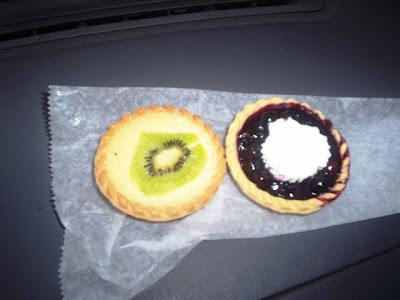 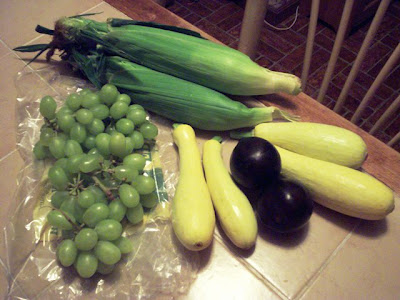 I squished myself in ( so many people were huddled around the bakery case including screaming brats-er-children who complained they couldn't see) and I hugged the bakery case until the young man came over to ask what I'd like. They had lots of different items ( pies, tarts, cookies, cupcakes etc.) and all looked great. I chose a blueberry tartlet and a key-lime tartlet ( that had a kiwi on top ) and a large chocolate-chip cookie and finally 2 cupcakes ... a chocolate /white frosting and a white/ white frosting. It all came to $12.96. Laura and I ate them throughout the day , one at a time of course, and all were delicious. I'd like to try other goodies from here. 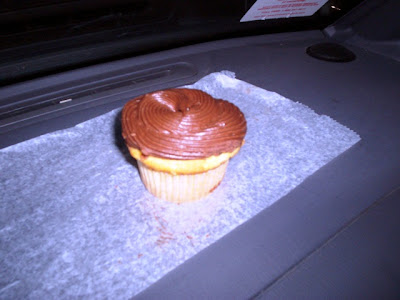 P.S. ......later on in the day when I picked up the bag that held my cupcakes , it felt quite light. I looked inside and instead of 2 cupcakes there was only 1 . And to make matters worse , it wasn't the cupcake I wanted . This was a white cupcake with chocolate frosting . I had ordered a white with white and a chocolate with white. Someone's got my cupcakes ! 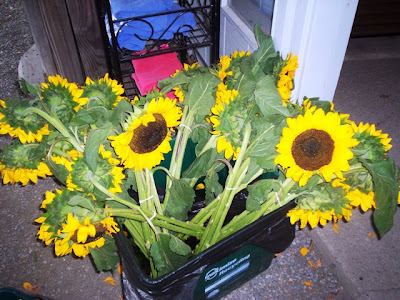 Anyway we really liked this whole little set-up of the farm stand, bakery and sandwich shop. Everything we had or bought was so tasty and fresh. I'd love to come here again ,but maybe on a weekday when we'd have more room to roam around and there weren't so many POGS ....PEOPLE WHO GO SLOW. You know these people , they stop and analyze everything before they buy it. It can take them 1/2 hour to pick out a frozen yogurt at the market. Meanwhile they let their kids run wild and get in everyone's way.They're in every farm stand , Whole Foods store or gourmet market around, standing ,staring and doing quick calorie counts of everything they want to buy. They love to look at food, but they're terrified to eat it. POGS !

Our day's total came to:

Let me explain . KETTLE POND FARM does exist ( I think ) . They have a web-site and that's how I found them. They're an organic teaching farm ( I think) and they have many events about farming during certain times of season ( I think). That's what I got from their site and you can check it out yourself by clicking on their link.

But Laura and I thought they were a food stand ( we think everything has food attached ) so off we went , after our day at WALKER"S , to find them. We went down all these little winding roads in the countryside of pretty Berkley, Ma. following our trusty GPS. So when it told us we had reached our destination....we were like ...WHERE ? We had the address right , the phone number right and even saw the sign .....but there was nothing there. We called the operator , who told us that number didn't exist . But when we called the number on their site , we got their voice-mail. What the heck ? So we drove down the dirt road ( nearest the sign ) and came up to someone's house. We didn't see a farm or stand or anything. Let's get out of here. I was picturing DELIVERANCE with the guns and the banjos , you know. So we backed all the way down to the road ( only a cage of chickens as our witnesses ) and took off. We still drove around the streets a little but to no avail. So if you know anything about KETTLE POND FARM , let us know. We'll be glad to pass along the info.

Don't forget to check out our friends at MenuJoy.com for local restaurant menus.
Posted by New England Bites at 9:40 PM