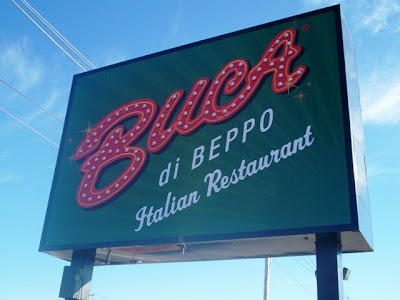 We've been curious about Becca da Boppa, Bocca di Bippa, Beppy di Bucca ... wait ... Buca di Beppo ever since we saw the sign going up at the former Vinny T's of Boston.  It's a large chain with several locations. We love Italian restaurants and couldn't wait for this new one to open. Then the rumors started. Rumor #1: This place only serves family style portions. Rumor #2: You can't order what you want. Rumor #3: Everyone has to order the same thing. Rumor #4:  It can get very expensive. Wow. We had to go see for ourselves. Would we be verifying these rumors or dispelling them? Laura and I were nervous but we had to find out for our dear readers.

We arrived on Saturday around noon not long after they had opened for lunch. Why so early? We were escaping the huge Christmas parade that was taking place in front of our house. If we didn't leave then, we wouldn't have been able to leave at all. So bright and early we entered the restaurant to a sea of hellos from the numerous waitstaff. Wow, how busy does this place get? I've never seen so much staff, especially at lunch time. There had to be no less than 30 working at this time. We'd surely get well taken care of and that's a good thing. 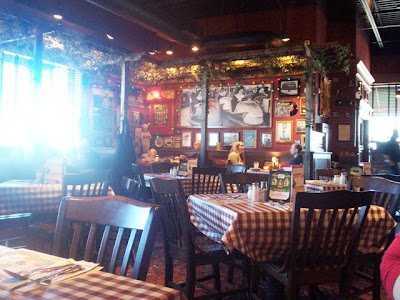 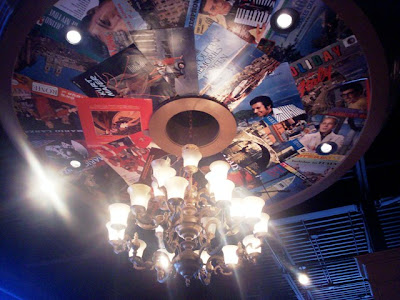 As we walked pass the horde of greeters and into the restaurant itself, we noticed how kitschy the decor was. They tried to include every Italian icon they could think of. There were popes, statues, grapes, wine bottles, the godfather and, of course, Sinatra. It was Italian overload, but fun. I thought the place was a bit cramped, with booths, tables and banquettes taking up every inch of space. If you sat at the banquette, you more or less cleaned the next table with your butt while you were squeezing by (not good since all that help needs something to keep them busy).

One very nice girl showed us to our seat and said our waiter would be right with us, and he was. Cameron first asked us what we were celebrating. Umm ... shopping?  LOL! Then he brought us the menus and the day's specials and explained how to order. Wow, a lot of rules. Here's where those rumors are addressed. Because we were there for lunch, we could order individual servings off the menu. We could also, if we wished, order the small portion (which serves two to three) or the large (which serves up to six). Of course, if we did this, we would have to order the same thing and pay the price for the larger meal. This could get expensive. If we went at night (when individual portions don't exist) and I wanted spaghetti but Laura wanted ravioli, we'd both have to order a portion for two to three people and pay about $18 each or we'd both have to order the same thing so we could pay the $18 for both of us (Laura better want spaghetti, not her fave). If we wanted some garlic bread, we'd have to order a portion for two to three which would add another $9 to our tab. This would really add up. The best way would be to go with a group of people, who all want the same thing. I don't know about this.

After his menu explanation, our very pleasant waiter brought us some bread with oil and our desired drinks, two Diet Cokes. We decided to forgo the individual meals and order the small (two to three) Quattro al Forno for both of us at $18.45. This consisted of cheese manicotti, chicken cannelloni, baked ravioli and stuffed shells. Sounds delicious. 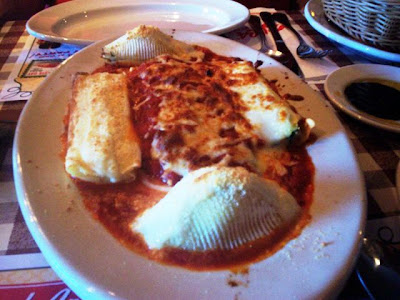 Hmm. I thought for sure we'd have to use our trusty ice bag to bring home leftovers from our assumed huge portion. I can't see how three people would have split one manicotti, one small cannelloni, three ravioli and two shells. It was just enough for Laura and I. That third person would have to settle for the rest of our bread. Oh well, most importantly, how did it taste?

THE VERDICT: It was good but nothing to write home about. I can think of 5 restaurants, off the top of my head, with better Italian food. It was tasty in the old school, red sauce, heavy, make-it-at-home for supper way. The service was very good and the place very clean. Would I go again if someone asked me, sure. Would I choose it on my own, probably not. I don't care for the ordering system and I'd like the food to be a little lighter. I think this place is better for big parties (definitely not a date place), especially those who all want to share the same entrees. As for me....I like to have what I want.

Don't forget to check out our friends at MenuJoy.com for area restaurant menus.
Posted by New England Bites at 12:08 AM