797 Robeson St.
Fall River, MA 02720
(508) 675-0591
I had my first taste of Highland Pizza while my sister and I were on a babysitting gig for a cousin. We both fell in love with its crispy crust and the thick, but not stringy, cheese topping. Unfortunately, this place does not deliver, and since laziness runs high in my household, we usually skip over Highland when we're looking for a pizza fix. However, on this day, Mom and I were ready to familiarize ourselves with the taste of this spectacular pie. 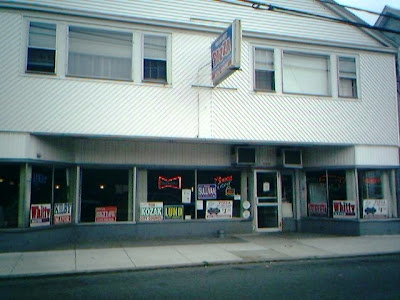 Highland Pizza isn't much to look at. In fact, it would be easy to miss were it not for their lighted "Highland Pizza" sign. It's built into a long apartment-esque white building, and I believe they have a shared parking lot a few doors down from the entrance. However, I almost never park in the lot; I always opt for the street parking, which can get pretty cramped as Highland Pizza is on the side of a laundromat and right across the street from a small shopping plaza with a Dunkin' Donuts inside. We Fall Riverites really love our Dunkin', and we'll do just about anything, including double park, to get a sip of that coffee. 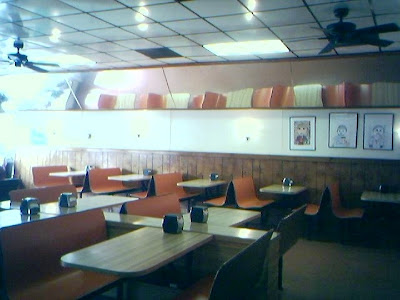 Once you step foot through the door, aside from the weird rug with those annoying grooves that make you wiggle when you walk, you will see that Highland is your typical pizza and sub shop. There are orange booths along the back wall and in the middle of the restaurant, and everything is kept very clean by the busy waitstaff. They do a huge take-out business, and when you call to place your order, they give you a pickup number. Today, I was number 98 as Mom had called in an order for a large extra cheese pizza. Although the woman on the phone thought that my mother had said "an extra-large cheese pizza," Mom corrected her and we both hoped that the order was going to be right. The woman on the phone said that the pizza would be ready in 20 minutes.

Cut to thirty minutes later (at 2:30 p.m.), and I was just arriving at Highland after having waited in line to pick up my parking permit for The Great Holy Ghost Feast, which is held right across the street from where I live. I was a bit flustered because I thought that the pizza was going to be cold, but I was happy to see that the pizza had been waiting for me on top of the oven, which kept the pie nice and hot. I gave my pickup number and the cashier told me that the total would be $9.71:

TOTAL = $9.71
<
I gave her a $10, took the change (I didn't see a tip jar), and went on my way. I also managed to score a small take-out menu from the cashier. On my way out, I noticed that there were a few people eating inside, and they looked very happy with their lunch choices. When I got the pizza home, Mom and I wasted no time in diving right in. 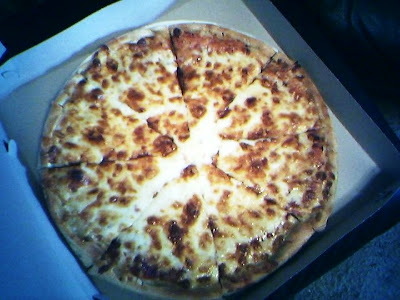 The pizza looked picture perfect, and tasted just as fabulous. The cheese was just baked enough where it had that crispy texture which helped in holding the extra cheese topping that we had added on. The crust was crunchy and tasty, and the slices were still piping hot, despite my picking it up late. By the consistency of pie, you could tell that this pizza was made with real cheese, and not the fake cheese that gets long and stringy when you try and separate the slices (a.k.a., Pizza Hut).

The prices here are excellent and they range from a $5 small cheese pizza to an $11 large Highland special. Toppings include onion, pepper, meatballs, chicken, pepperoni, hamburg, linguica, pineapple, extra cheese, bacon, chourico, anchovies, sausage, mushroom, ham, Hawaiian (ham and pineapple), and the two- and three-way combos (two-way $6.50-9; three-way $7-9.50). They also have individual slices that you can by for only $1.25. Aside from pizza, they have grinders, hot dogs, hamburgers, spaghetti dishes, and salads, with nothing in these categories costing over $5. Highland also has something interesting that I've never seen before - the pizza cheese salad. Perhaps that will be my next adventure when ordering take-out. Although I do wish that Highland delivered, it is nice to get out of the house once in a while and visit this hidden jewel in Fall River. You won't be sorry!