1972 Acushnet Ave.
New Bedford, MA 02745
(508) 995-5521
I heard about Ma's Donuts from a friend who told me that he used to wake up early just to arrive at Ma's for 6 a.m. when the doors opened. He raved about their glazed donuts, and told me that they are bigger and better than the Krispy Kreme version. I just had to see this for myself, and let me tell you, he was right. I've been back a few times since then.

On my first visit, since I am not quite familiar with New Bedford, I brought along some directions from MapQuest. Luckily for me, the directions proved correct as I found the place right away. On today's visit, I was able to score a spot in the tight parking lot that is overshadowed by a painted sign. To say that you missed seeing this sign would mean that you need to change the prescription in your glasses, because you can't miss it: 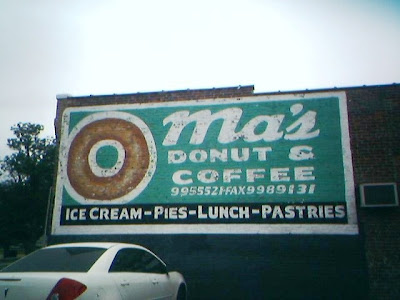 Ma's Donuts is also a small coffee shop, hence the official title of Ma's Donuts & Coffee Shop. The parking lot is quite tiny (there is street parking as well), but it matches well with small brick building. However, once inside, you'll find that there are quite a few seats in the diner area (both booths and counter service). The bakery counter is just to your left as you walk through both sets of doors and into the restaurant. 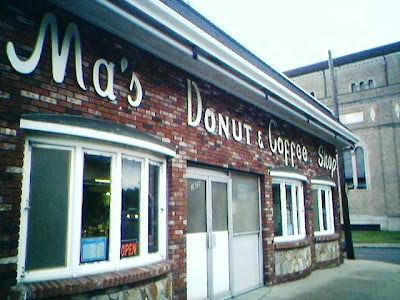 When I arrived at around 7 a.m., there was already a line of people waiting to get at those delicious donuts. There were a few scattered diner patrons, but all the action was at the the bakery counter. There were three women working this morning, and all were extremely busy. When I finally got to the counter, I was able to place my order - six double chocolate and six plain glazed donuts. While the younger girl started packing up the circular delights, I noticed that Ma's had a variety of filled favorites like apple, blueberry, lemon, and Boston creme. There was also a variety of muffins, coffee rolls, squares, and other baked goods. I also noted that everything was pretty well stocked, as I've been here on other occasions and basically everything was gone. The reason for this was probably because on my first few visits I stopped at Ma's after the morning rush, and I do believe that Ma's is only open until around 2 p.m. By then, all the glazed donuts had long been digested. 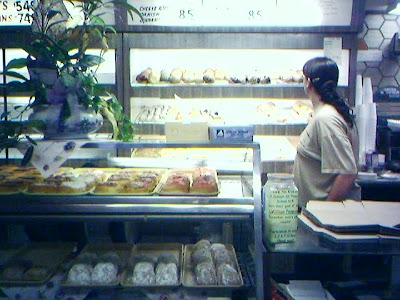 The friendly waitress then gave me my total - $5.48 (or $5.49 - it was early, and my mind was clouded with the allure of donuts). She handed me two large boxes and wished me well. I briskly walked to my car, got in, and headed for home. The smell of the icing was just too much for me, and I ended up devouring one of the double chocolate donuts at a red light. I found it to be very good. A little crispy for my taste, but still delicious. The icing wasn't sweet at all and the donut didn't feel like it was made of lead. After a safe trip back to Fall River, I raced upstairs with the two boxes of goodies. Mom dug in and chose a plain glazed. She thought it was heavenly. Again, this donut is not sweet, yet it is covered in icing. I'm not sure how that is even possible, but the donut remains light and fluffy and has that classic glazed taste. Like I said before, my friend was right - the Ma's glazed is bigger and better than Krispy Kreme's! Ma's Donuts have been consistently good each time we were lucky enough to get some. 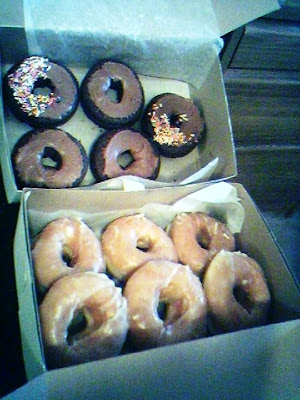 Although it's a little crazy for this Fall Riverite to wake up at 6 a.m., put shoes on, and drive all the way to New Bedford just for a glazed donut, there is a method to my madness. These donuts are absolutely worth it. They're inexpensive, you get a great portion for your money, and the taste is out of this world. I'd like to try breakfast at their diner someday, and I know that I'll definitely be taking a few glazed donuts home ... if they can survive the car ride.
Posted by New England Bites at 9:00 AM