310 Shove St.
Fall River, MA 02724
(508) 679-5010
www.mcgovernsonthewater.com
Although Mom and I have been here for many different functions, and back in the dark ages Mom came here for dinner with Dad, I had never had an "official" meal at McGovern's, despite it being a Fall River institution. Mom decided that this place should be the first steppingstone to our "Tour of Fall River," where we plan to highlight (weekly) some of the most recommended restaurants in our beloved city. I couldn't wait to go! 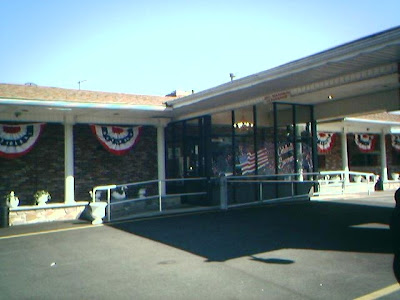 We pulled into the tight parking lot and got a spot pretty close to the door (always a bonus). As we walked in around 3:45 p.m., we noticed that there were only a few couples scattered in the booth area, and only one party seated in the table section. After asking us if we'd like a table or booth, and some slight confusion about who would be walking us to the table and where we would be sitting, the hostess finally brought us over to a small table with four wooden chairs and topped with a white tablecloth. It was also topped with hard, clear plastic which was probably placed there to protect the tablecloth. The hostess left us with two thick green menus that we started browsing through almost immediately.

Our waitress soon came over to greet us. Her name was Charlene and she was extremely friendly and polite. She took our drink order (two Diet Pepsis) and informed us that the list of specials were on the table in a little plastic stand. It didn't take long for Charlene to reappear with our drinks, which came in blue plastic Pepsi glasses along with two straws. Because the menu was so vast, Mom and I needed another minute. Charlene politely walked away so Mom and I could make our decision. Believe me, there was a LOT to choose from. There were very large sections devoted to both steaks and seafood, and a long list of appetizers, salads, soups, sandwiches, pasta, poultry, and desserts. McGovern's also has a list of daily specials and some area favorites like meat pies, shrimp Mozambique, chicken chow mein (Wednesday-Friday), and fish and chips. Some of the old-fashioned favorites include Yankee pot roast, pork chops, veal parmigiana, meatloaf, and both grapenut and bread puddings. Charlene timed it perfectly because as soon as she returned to the table, Mom and I were ready to order. I went with the baked stuffed fillet of sole ($9.95), while Mom chose the house special boneless fried chicken ($9.45). Charlene asked Mom if she wanted all white meat, and she did. That was $1 extra. With my meal I had cole slaw and fries for my sides, and Mom had the mashed potatoes (no gravy) and corn. Charlene asked us if we'd like some dinner rolls, and we took her up on the offer. She quickly brought them over while Mom and I checked out the interior. 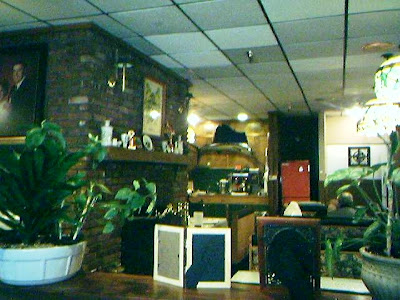 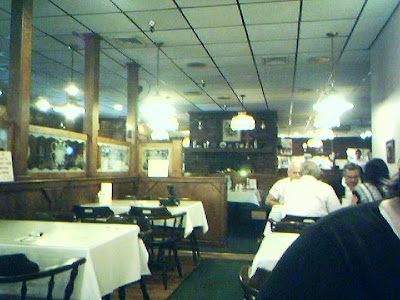 This place just screams "welcome home." You really do feel like you're dining in familiar territory, even if you'd never been here before. There were tapestries hanging on the wall, a dark, cozy fireplace near the booth section, chandeliers, light woods, plants, paintings, picture frames, and dark green rugs that made everything feel very relaxing. The entire staff was wearing uniforms, which I appreciated as you really don't see that much anymore. There was also a large wedding party having their reception in the back rooms, so everyone was really on their best behavior. There were lots of busboys bringing trays of dishes back to the kitchen, and everyone seemed to be in a really good mood. It was great!

Before we knew it, our food was being carried over by a young male server who was accompanied by an older waitress. I don't even think we waited 15 minutes - perhaps not even ten. The older waitress stated that she "didn't know what happened to our waitress," but she was going to try and do her best to put our food down. She was hysterical without even knowing it. First, she took one look at my fish and said, "What is this?" I explained that it was the fillet of sole, and she plopped it down in front of me. Then she looked at my mother's chicken and said, "What is this? Pork chops?" I laughed and said that it was chicken, and she said, "OK ..." and put it down in front of my mother. Then, when it came to divvying up the side dishes, she told us that she was just going to put them all down in front of us and we could take whichever ones we had ordered. It didn't seem like she had the time to stand there and figure out who had the corn, but we loved her anyway. As she was almost done placing everything down on our table, Charlene reappeared to check to see if our food was ready. She was surprised, much like we were, to see that it had already arrived.

Mom's chicken was amazing. It had a light, crisp coating, and the chicken itself was very moist and well done. There were a half dozen pieces of chicken, and she somehow managed to score two sides of mashed potatoes. You could tell that the potatoes were definitely homemade, and she said they were delicious. The corn nibblets were also hot and fresh. Mom said that her whole meal was outstanding, and she was very impressed. She mentioned that McGovern's had certainly improved since she had last visited. The meal also came with a boat of gravy (although she didn't want any) and a side of cranberry sauce. 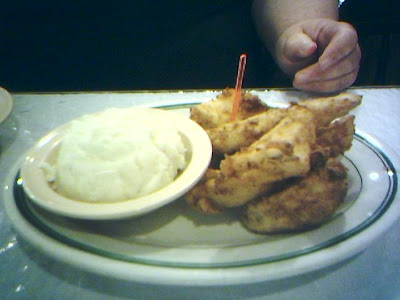 My dish was out of this world. Not only were there two huge fillets of beautiful white sole, it was stuffed with a tasty bread stuffing and baked in a thick cream sauce. It was also lightly breaded and served in a small casserole dish. This was a huge portion and I stuffed myself full because I didn't want to leave a single piece behind. My meal also came with large French fries and fresh cole slaw. There was already a bottle of ketchup on the table for my fries, and this was certainly a lunch to remember. 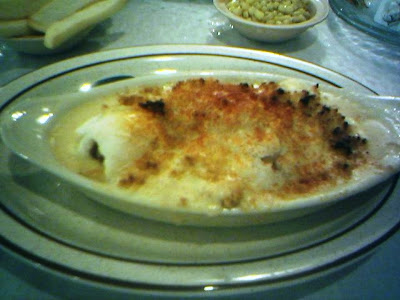 Charlene came over during the meal to ask how everything was. Of course, we said it was delicious. We also briefly talked about the wedding out back and the Shania Twain song that was being played. Charlene was one of those waitresses that you didn't mind if she came to your table to chat. She was really excellent.

After we were finished, Charlene cleared away our plates and left the bill:

We left $30.10 on the table for Charlene (including 20% tip). She wished us well, and then gave us directions to the ladies' room after my inquiry. When we got back there (we had to follow a lot of signs), we saw a special "Bridal Room." I'm guessing this is where the brides get ready - or go to the bathroom - before their reception. The ladies' room was beautiful - very clean and neat with many stalls and sinks.

As we left, I thanked Mom for recommending this place and starting our "Tour of Fall River" off with a bang. The lunch that we had at McGovern's definitely overrode every stale ham and tuna salad sandwich that we've ever had at one of their banquets. They also have a huge take-out window, and I can definitely see why this is needed. The food is excellent, the restaurant is popular, and you should really be ashamed of yourself if you live in the city and haven't been here yet. It's a gem!

P.S. - My friend, Melissa, just reminded me that this is one of the only places around that serves corned beef and cabbage. She loves this place!