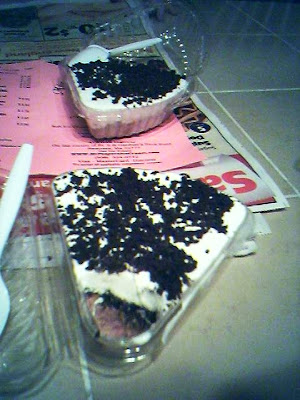 UPDATE: Due to the response I received from my good friend, Amy, I decided to visit Mister Peepers' again to try one of their famous ice cream cakes. Amy told me that she gets one every year for her birthday, and since I know that she has great taste, I decided to see what all the fuss was about. She told me that Mister Peepers' sells individual cake slices, so I was interested to see what those would be like. After bumming some money off Mom I set out to Swansea to get a few pieces of cake. When I got there, there was a gentleman behind the counter gathering up treats to put into the freezer. I spotted the cake slices right away. They come in triangular plastic containers and are made with three layers of ice cream - two vanillas and one chocolate, plus two layers of cake crunch. I grabbed two slices and a Mister Peepers' menu. The total came to $6.09 (each slice is $2.90 plus tax), and I was glad to see that the slices were quite inexpensive. I quickly drove back over the Braga Bridge and ran the slices upstairs to my apartment. As Mom and I dug in, we both remarked at how cold the slices had stayed during the ride home. We found the cakes heavenly, each bite containing an equal amount of chocolate and vanilla ice cream, and the yummy cake crunchies. The slice was just enough for one person, and both of us finished our cake in record time. It was that good! Mom and I both think that this cake tasted better than the Carvel cakes, which are very similar in the ingredients. You can tell the cake is homemade, and we were very glad to see that it was unlike Carvel because our pieces were nice and hearty - a trait that the Carvel slices seems to lack. I am officially moving Mister Peepers' out of the "so-so" range and into the "good," simply because of their delicious cake. Although their ice cream cones were average, everyone should stop by and try a slice of cake. You won't be sorry!

After Mom and I came from seeing the movie Hairspray, we were looking for a cool treat. We attempted to visit Simcock Farm in Swansea, but the lines were extremely long and we didn't feel like waiting around (Simcock is sometimes slow on the service). As we were heading up to Eskimo King, we came across Mister Peepers'. Although we'd been here before, and weren't that crazy about it, we decided that it would suit our ice cream needs for the time being. 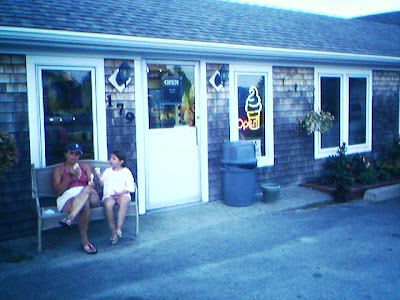 We parked in the back and walked around to the front to go inside. Mister Peepers' is a very small home-like building on a busy street corner. Although I never see it packed, I do usually see cars parked along both sides of the tiny house. When Mom and I walked in we were facing a large freezer that housed their specialty ice cream cakes and other cool delights like sundaes and bars. Since we were just there for a soft serve cone, I asked the staffer what the flavors were. She pointed to a sign on the door that advertised about eight different soft serve flavors. 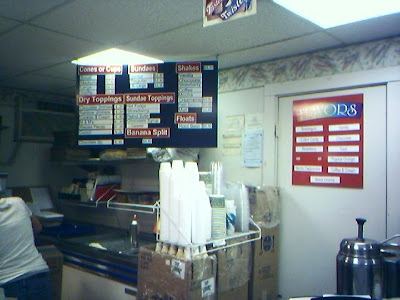 There were two girls working there, and the one that was serving us was quite polite. The other girl was busy moving boxes of stuff around the tiny work area. I ordered a medium mocha cappuccino cone, while Mom ordered a small coffee and cream cup. Both were served up extremely fast, partly because all it was was vanilla ice cream with a "flavor shot" swirled around the edges. It wasn't really coffee or cappuccino ice cream. Although I didn't notice the individual prices, the total came to $5.36 for both treats. 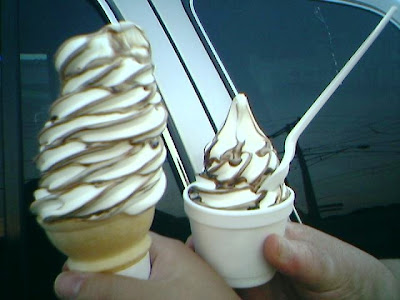 The ice cream was good. It was cool, smooth, creamy, and just what we were looking for on a hot day. My cone had hints of mocha cappuccino, but you could tell it was just plain vanilla ice cream with a kick. Mom's "coffee" cup tasted like a rich vanilla ice cream with a heavy coffee swirl. She said it actually tasted too much like coffee syrup. Although both were delicious, neither knocked us over with the taste. We love ice cream, and it certainly served its purpose in cooling us off. However, we've had better.

We'd been to Mister Peepers' before, and I also visited this place with my sister. On our first visit we ordered two large swirl cones. They tasted so much like frosting that Mom and I both got sick afterwards from the nauseating sweetness. My sister, who loves all things frosting, thought it was the most delicious thing she's ever tasted.

Although they have shakes, sundaes, cones, cups, and other treats, their main advertisement is their ice cream cakes. I'd like to give them a try, but I'm a little skeptical. I love ice cream as much as the next person, but there is such a thing as "too sweet," and Mister Peepers' seems to hit that nail right on the head. I wish I could have given it a higher rating, but like I said, to us it wasn't anything special.
Posted by New England Bites at 3:40 PM