www.99restaurants.com
Mom and I couldn't decide where we wanted to have lunch, so we let our wallets do the talking. We had a coupon for a free appetizer at the Ninety Nine Restaurant, so we decided to hit up our local Fall River location and chow down. This location is great because it is housed in an old mill, which Fall River is famous for, and has lots of nostalgic pictures and Fall River artifacts that makes this place very unique and homey at the same time. 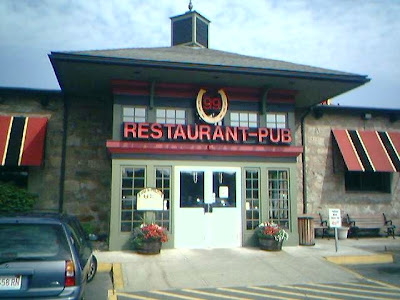 We love Ninety Nine. I've been here so many times, I can't count them. I've had everything from a few drinks at the bar to a full course dinner, and everything has been great. Mom loves it too. She said that Ninety Nine is her favorite of all the "chain" restaurants, and I have to agree with her. We're big fans.

We went inside and were greeted by an array of hostesses that were analyzing their list of tables at the front of the restaurant. One of them grabbed a few laminated cardboard menus and led us all the way to a back table over near the restroom area. It was a booth/table combo, which was fine because I like booths and Mom could go either way about tables. It wasn't too busy on this day, which is rare because this location has always been the hub of the Fall River dinner crowd. I think we were too early for those patrons because it was only around 2 p.m. 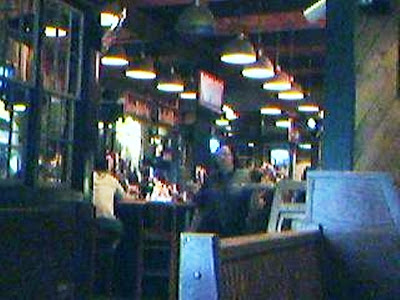 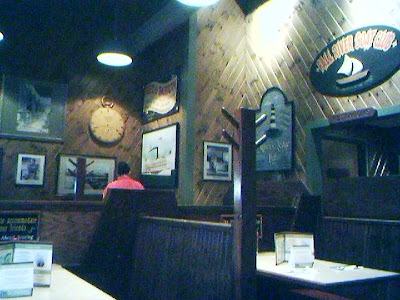 It was not long before we were greeted by a very boisterous waitress named Tanya. Her Ethel Merman-esque voice left our ears ringing, yet she was extremely pleasant and asked us what we wanted to drink. Mom and I ordered two Diet Pepsis while Tanya ran down the list of specials that Ninety Nine was offering on this day. She also directed us to a new insert in the menus that included some speciality drinks such as the Tini Bikini, and seafood items like the fish tacos ($7.49). I've already had those and they were outstanding.

Tanya quickly returned with our drinks, but not before catching me writing down some of the menu prices in my notebook. She shouts, "Are you doing Weight Watchers?" As my face turned beet red, I tried to explain that I was just "writing something down." Tanya then chatted with us about some of the successes she's heard of with that plan. Nonetheless, I am not on Weight Watchers, but I started to feel the eyes of the other patrons looking for the fat chick who was writing down her food choices. Nevertheless, we laughed and gave our order. Mom ordered the fish and chips dinner portion ($8.99 - lunch is $7.49), while I ordered the lunch portion of smothered sirloin tips ($8.79). I'm not sure what the smothered sirloin dinner portion costs, but I do know that the regular broiled sirloin tips' dinner portion is $10.99, and the lunch portion is $7.79. I ordered my tips medium well with mashed cauliflower and carrots as my two sides. For our free appetizer, Mom and I chose our favorite - the Gold Fever Wings ($7.49). You can also get an extra large portion for $9.49, however, we got the smaller plate so we could keep within the confines of our coupon.
It never takes long for your food to arrive here. Everything is always served hot and the service has always been excellent each time we've visited. Mom and I certainly have our favorite menu choices. She likes both the steakburger ($6.99) and the bacon and cheese steakburger ($7.79). The meat is always very tender and juicy and tastes much better than your average hamburger. I myself have always been a big fan of the boneless buffalo wing salad ($8.99). Although I sometimes ask for it to be served without those annoying chipotle strips (they stab the inside of my mouth), I love the marriage between the spicy wings and the fresh vegetables. I have it served with Italian dressing since I don't fancy blue cheese, but a friend of mine told me to try getting it with ranch dressing. Sounds tempting! The buffalo wings here are outstanding. You can get a plate for $7.49, or an extra large plate for $9.49. Also, one of our newer favorites on the appetizer list is the toasted raviolis ($6.99). These are deliciously toasted half-moon ravioli oozing with mozzarella cheese and served with marinara sauce for dipping. How could you not love these? If you're torn between appetizers, you can always order the Boneless Wings and Skins Sampler. It includes hand-battered juicy chicken tenders dripping with Ninety Nine's own spicy buffalo sauce and traditional style potato skins with melted cheese and bacon. It is served with blue cheese dressing, celery sticks, and sour cream for only $8.99. For lighter meals, you can order a lunch portion as their lunch menu is served up until 4 p.m. daily.
As expected, it didn't take long for our food to arrive. First, a server brought over the Gold Fever Wings. They were perfect as always. The juicy chicken tenders were wrapped in a deliciously spicy honey mustard BBQ sauce. It was served with a side of celery and blue cheese dipping sauce. There were about eight on the plate, and they didn't last long at our table. These are definitely worth ordering, and Mom sometimes orders the extra large version with a side of Ninety Nine's delicious fries as her main meal. When our meals arrived, Tanya brought them over. She then offered to refill our Pepsis because they were a little on the low side, and we accepted. She also brought me a form to fill out to receive the Ninety Nine Newsletter. There was a cardboard ad on the table stating that if you signed up to receive the newsletter, you would be entered in a drawing to win a $99 gas card. Of course I was signing up for that!! She brought the new drinks and the form over to us, and then went to check on another table. 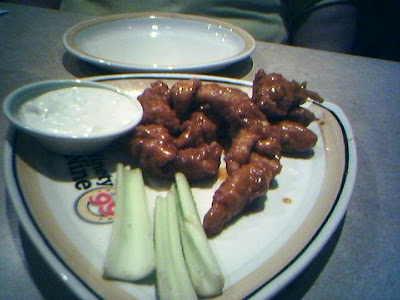 I've never been a waitress, nor would I like to be. It seems like a very hard job that doesn't pay much, and poor Tanya was stuck having to deal with a picky couple that was seated behind us. Apparently the woman at the table was allergic to gluten. The meal she ordered - gasp - had gluten in it. However, that didn't stop her from eating half of the plate. When she cornered Tanya to ask her if her meal had gluten in it, Tanya immediately went in the back to check. She came back out and informed the woman that the chef was looking for a box to read the ingredients. Tanya disappeared again, but soon came back to say that yes, there was gluten in her meal. Tanya then explained that she would take the meal off of her bill, and asked if she would like something else. The woman was skeptical at first, but then ordered a plain hamburger patty with no bun. Tanya asked how the woman was feeling, and the woman dramatically said, "Um ... I don't think I'll have a seizure, but ... I guess we'll just wait and see." Are you kidding me? She ate half of the plate! You think a person with a severe allergy would be a little more careful when choosing things off the menu. Either way, Tanya made the best of a gluten-free situation by making sure that the customers had everything they wanted, and that everyone was satisfied. I'm pleased to report that no one had a seizure.
The food was outstanding as always. My steak tips were smothered with mushrooms, peppers, and onions, and the meat was juicy and tender. My cauliflower was steaming hot, but buttery and had that mashed potato consistency that I love. The carrots were also buttery and had sweetness to them. I've never ordered steak tips at a restaurant before. I'm not a big red meat person, but if all steak tips taste as good as the ones at Ninety Nine, I'll definitely order them elsewhere. 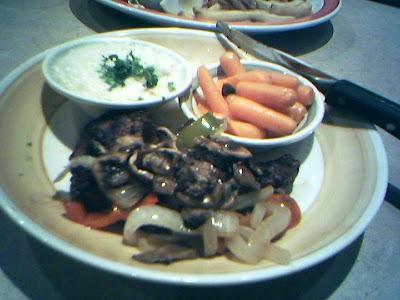 Mom's fish and chip platter looked delicious. She said that her fish was flaky and white, and the breading was crisp and buttery. She had two large pieces of fish and a good amount of fries. The fries are always good. I think they leave the skin on when they fry them. Either way, whatever they're doing, I hope they keep doing it. Everything was fantastic. Her fish was served with a side of cole slaw, which I devoured since Mom isn't a fan. 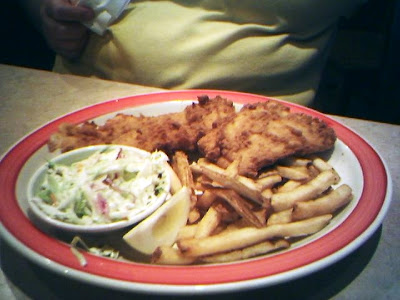