420 Hope St.
Bristol, RI 02809
(401) 254-1390
<
This morning was actually my second trip to Bristol Bagel Works; the first one being yesterday afternoon. I arrived at BBW around 1 p.m. on Thursday after unsuccessfully locating the place because of some bogus directions found on the Internet. For anyone who thinks this place is right near a Dunkin Donuts - you're wrong! The Dunkin is a little farther down the street. This place is on the next block down and across from Leo's Ristorante. When I finally got inside, the place was nearly vacant. There were a few people sitting both outside and in, but the baskets of bagels were almost completely empty and they had no muffins left. The muffins came highly recommended, so I was really disappointed. I bought three bagels - cranberry walnut, blueberry, and cinnamon sugar - and it only cost me $1.94. That's pretty cheap compared to places like New York Bagel and Dunkin Donuts. Because I was so sad, I didn't even bother taking pictures. I chalked the empty bagel baskets and lack of muffins up to the fact that I arrived at 1 p.m., when the place closes at 2:30. If I were to get the full effect of this establishment, I needed to go in the morning. Early morning. I had a funny feeling it fills up pretty quickly during the morning rush.
<
NOTE: I ended up eating the cranberry walnut bagel while I was stuck in traffic coming home over the Mount Hope Bridge. Delicious!

Round two began this morning at 8 a.m. I woke up, quickly dressed, headed down the road and over the Sakonnet and Mount Hope Bridges, and parked right in front of Bristol Bagel Works at a little after 8:30 a.m. 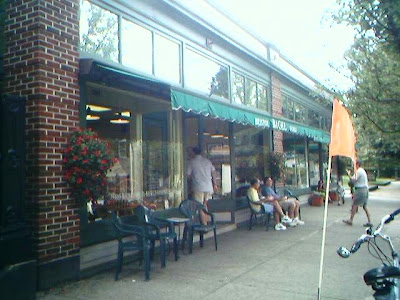 As you can see from the picture below, I was at the back of the line as soon as I walked in the door. Apparently everyone in Bristol comes here to have a quick nosh before dashing off to work. While waiting in line, I noticed the large menu board above the ordering counter. It displayed many morning favorites like coffee and muffins, along with their specialty bagels, spreads, and other pastry delights. I noticed an olive spread which I'm dying to go back and try, but I was really only here with one thing in mind - the mocha raspberry muffin. This muffin is legendary on the Internet, and I just had to have one. 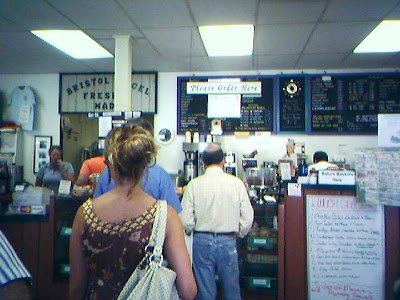 The interior is very plain, but extremely clean. It is decorated with local brochures, photos, books, and magazines, all set up around the edges of the dining area. There are tables and chairs both inside and out, and food transport is easy in the provided red baskets (which are to be returned inside once you're done eating). There is also a juice cooler over to the left of the restaurant with various fruit drinks and bottled water. Everyone that was there, both the workers and patrons, seemed to know each other. This is definitely where you want to go to get the "local flavor" of Bristol at breakfast time. 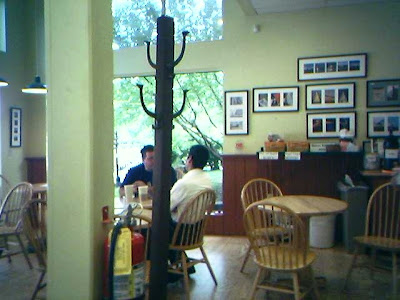 The girl who waited on me yesterday was working this morning, along with another young girl and two older women. They were all very polite and had been striking up small talk with almost all of the customers. The woman I had when I finally got to the front counter (which didn't take that long since everyone seemed to be very organized) wished me good morning and asked me what I would like. There was a long tray of muffins sitting atop the bagel display case, and I asked her to name them all. She not only did what I asked, but she went into detail explaining the ones that I wasn't familiar with, like their "Morning Glory" muffin which is basically carrot cake shaped into a muffin, and the other oat and fruit varieties. She then came across one mocha raspberry muffin. Just one! I can't believe all the others had been purchased. I took the last mocha raspberry and a morning glory. I also asked for a cheddar and broccoli bagel, which is something I'd seen the sign for yesterday, but unfortunately there were none left at that time. She put the three items in a bag and rang me up. Only $3.46 for these delicious and unusual treats. I could not wait to bring these home to Mom. 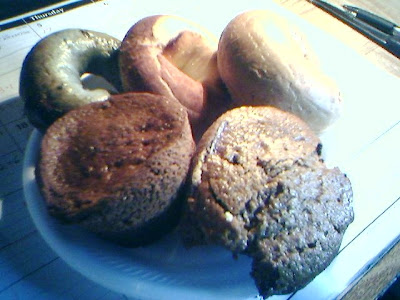 When I got them home, I announced to Mom that I was only able to score one mocha raspberry muffin. It was then decided that we split both muffins in half so that we could try a piece of each one. Before I did that, I took the above picture of the two muffins and the blueberry, cinnamon sugar, and cheddar broccoli bagels (remember, the cranberry walnut one from yesterday never made it home, ha, ha).
I sliced the up the muffins and put them on plates. Then, we dug in. Exquisite!! We tried the morning glory muffin first. It was like a delicious carrot cake without that sometimes overpowering cream cheese frosting. It had pieces of carrot, walnuts, and hints of cinnamon and nutmeg that was out of this world. I didn't think it could get any better - until I tasted the mocha raspberry. By far one of the two most delicious muffins I'd ever tasted - the second being the already devoured morning glory. The muffin was moist and was filled with mocha chips with a delicate hint of raspberry. Mom, who is not a fan of both mocha chips and raspberries, was bowled over by the taste. She agreed that both muffins were supreme, and you could definitely tell that they weren't store bought. These were true homemade delicacies.
Considering how good everything was, I was quite surprised that everything was so inexpensive. Although you really have to get there early (they open at 6:30 a.m. on weekdays), it is worth it if you're in the area and are looking for a great morning treat. Bristol Bagel Works is open from 6:30 a.m. to 2:30 p.m. Monday through Friday, and 7 a.m. to 2 p.m. on Saturday and Sunday.
Posted by New England Bites at 10:19 AM