www.starbucks.com
What can I say about Starbucks? Their coffee is too strong, their prices are too high, and you need a cheat sheet just to order a beverage. However, their Frappuccinos are outstanding! Since Mom and I had recently fallen love with one of their newest items, the Blueberries & Creme Frappccino (with Blended Creme), we decided to stop by the Commerce Way location in Seekonk, MA, at around 6 p.m. to get another taste of this fruity delight. 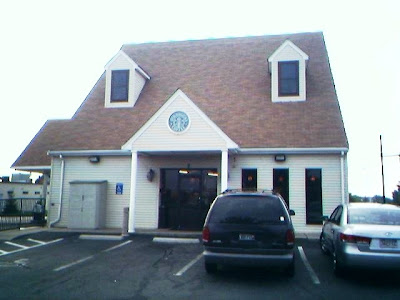 I've been to this Starbucks a few times because it's the closest one to Fall River (I believe there might be one in the Dartmouth Mall, but I haven't been there in a while). To get the full effect for this review, I decided to skip the drive-thru and go inside. I parked in the tiny lot, and went inside the even-tinier building.

When I got inside, it was just as I remembered. The design is very modern to make the place look like the trendy coffee houses in Boston and New York, even though Starbucks is a very large chain. The interior was extraordinarily clean. To the right of the entrance is a large seating area, and down at the far end of the building is the ordering counter. Of course, this is where all the action was today. Although Starbucks is usually crammed with artsy college kids talking about the symbolism in paintings, it was pretty empty ... except for "the family."

This family consisted of a grandfather, a mother, a father, and about five small children. As I waited patiently in line to place my order, I noticed that the parents were letting each precocious child order a coffee drink (yes, coffee drink) and then correcting the order once it had left the child's lips. The oldest girl was about seven, and she ordered a large (vente) coffee Frappuccino. Once the poor waitress started making it, the father changed the order to a small (tall) decaf Frappuccino. The waitress, looking drained, stopped what she was doing and started to work on the "revised" order. This happened when each child stepped up to the counter. Parents, if you're reading this, please note the following: 1) Don't let your child drink coffee; 2) If you see people waiting in line, don't let your pompous kids place the order; 3) Perhaps you should have some sort of a game plan as to who goes to the order counter so there isn't a group of eight hogging one cash register while everyone else has to stand there like cattle waiting for the slaughter. 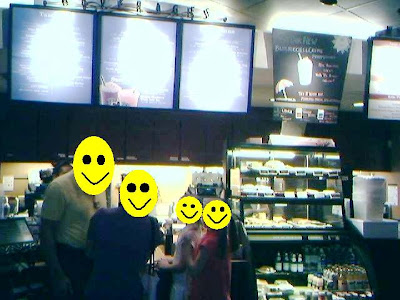 While I was standing there boiling with hate over this group of idiots, I started looking over the menu at Starbucks. Aside from their famous coffee blends (which I find too strong), they have lattes, frozen Frappuccinos, espressos, teas, and classic favorites like white hot chocolate and hot vanilla cremes (a winter favorite of ours). Mom and I, through a suggestion from my friend, Scott, previously tried the White Chocolate Mocha Frappuccino and loved it! It was almost like a dessert rather than a drink. I've also had their Banana Frappuccino (I'm not sure if this is still available) and it was to die for. With a strong banana flavor, this drink was cool, creamy, and just what I needed after a long day of errands. As for food, Starbucks offers brownies, cookies, bars, coffee cakes, a few doughnuts and bagels, muffins, croissants, and seasonal treats like pumpkin loaf and the maple nut oat scone. I read somewhere that they started serving breakfast sandwiches, but I hadn't noticed this option while I was reading the menu inside. They also have a juice area that includes waters and tea drinks, and mostly all their coffees and Frappuccinos can be made "light," which will save on calories if you're watching your figure.

Since my figure wasn't a factor when I was eating that entire pizza at Riccardi's, I decided to order the regular blended creme Frappuccino ... that is, if I could ever get to the counter. While these arrogant people agonized over the difference between tall (small), grande (medium), and vente (large), I peered over at the helpless waitstaff as they were trapped behind the counter. Did you ever notice that every Starbucks hires an ecclectic group of people? There's almost always the tall, slim, surfer-type guy who wears hemp braclets and ties his long, blonde hair back with a bandana. There's also the heavyset, cynical girl with black hair and the Buddy Holly glasses, the metrosexual guy who weighs just over 110 lbs., and the requistie bimbo that is so busy flirting with the surfer guy that she's forgotten what you ordered ... again. Either way, I had enough of standing around and went to my car. Mom was sad when she noticed that I had not yet gotten the blueberry drinks, but I told her that I would go through the drive-thru because I thought that it would be quicker. I was right! I ordered my drinks, and got them in about three to four minutes. The total came to $9.03 for the two grande Frappuccinos ($4.30 each plus tax), and they were just as good as I remembered. The blueberry taste is not bitter at all as it's mixed with the blended creme. We ordered it without whipped cream, but you could always add that on for something extra. 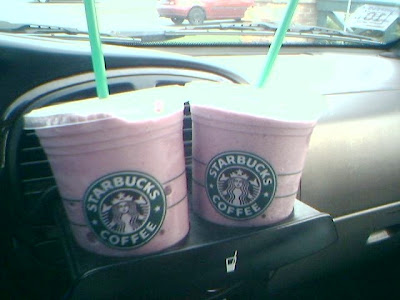 I really do enjoy Starbucks, but the customers, and sometimes the waitstaff, leave a lot to be desired. I'm the "just give me my coffee and get me out of here" kind of person, and I believe that the Starbucks way of life is to hang out for hours just talking about yourself and how much the coffee reminds you of the time you went backpacking through Europe. If it weren't for the Frappuccinos, I think I'd just be heading to Dunkin Donuts.
Posted by New England Bites at 12:45 AM