My mother is not a very adventurous eater. This fact is clearly noticeable in our reviews as she tends to order the same types of dishes on a lot of our adventures. My friend, Scott, even jokes that she only eats spaghetti and coffee ice cream. However, today was going to be different. Since we were continuing our "Tour of Fall River," we decided to have lunch at Lusitano because 1) we heard a lot of good things about their food, and 2) Mom had a coupon. As we chatted about what we would get on the ride to the restaurant, Mom vowed that she was going to walk on the wild side and maybe get the steak. I've gotta see this! 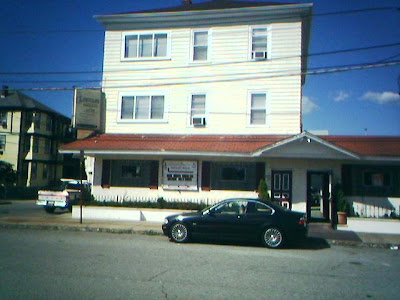 This was going to be my first visit to Lusitano, but it was Mom's second. She came here for a birthday party for my cousin, and when she came back home, told me about how good everything tasted despite her picky ways. We arrived around 3 p.m., and I pulled into the huge lot they have across the street from the restaurant. I think there were only about four other cars in the lot, so I was sure that the place wasn't going to be packed.

When we got inside the dining room entrance, we were facing a mirror. To the right of the mirror was the main door, and we quickly went inside. A polite waitress came over to us, grabbed two very heavy, pleather-bound menus, and brought us over to table 9. Aside from one couple seated just behind the mirror, Mom and I were the only other people in the dining room. We opened our menus and began to examine the possibilities. Although the menu is not large, it does boast every typical Portuguese dish that you can think of. Bacalhau ($11.95-14.95), scrod ($11.95), broiled salmon ($12.95), shrimp kabob ($13.95), shrimp Mozambique ($11.95), and a variety of beef, pork, and poultry dishes that sounded amazing. Everything was listed in Portuguese, but thankfully the descriptions of each dish were written in English. Their appetizer list consists of chicken wings, soups, salads, kabobs, shrimp, fish cakes, and something called Chouriço á Bombeiro, which is Chourico Fireman Style ($5.95).

When the waitress came back over (we had asked for a few extra minutes), Mom and I had finally made our decision. She broke from the norm and ordered the Bife a Regional, which is marinated Azorean style steak topped with a fried egg and red pepper ($11.95). I chose the Filetes a Lusitano ($11.95), which is scrod smothered in spicy tomato sauce and topped with peppers and onions. The waitress left a basket of two Portuguese rolls and some butter on the table and went back to the kitchen, but not before taking our order for drinks, soup, and salad. We both ordered Diet Pepsis, and Mom chose the salad while I chose the Portuguese kale soup. When the waitress came back to the table, she brought with her a contraption with three little bowls attached to it. In the bowls were French, Italian, and we believe Thousand Island dressing. After Mom scooped a couple of teaspoons of French onto her greens, the waitress took the dressings back to the kitchen. I found my soup to be delicious. Piping hot, the broth was spicy and the potatoes, beans, and kale were fresh. The slivers of chourico and beef were tender and melted in my mouth. Mom's salad was crisp and fresh and the French dressing was cool and tangy. As we waited for the food to arrive, we scoped out the interior. 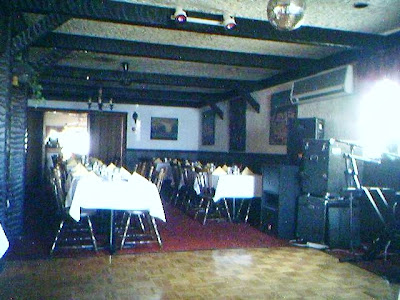 It is quite elegant in the dining room, and even more so in their large banquet room (which we could see through a sliding door). Mom and I were seated next to the dining room dance floor, and every table was covered with a white tablecloth, cloth napkins, and attractive tableware. By the dance floor there was quite a large stereo system that was playing Portuguese music quietly in the background, a disco ball, and a few microphones that were probably used on those drunken karaoke filled nights. Their banquet facility is called Royal Gardens, and on their Web site you can find a variety of information about the different packages they offer. While we were there, we saw a couple examining and later signing up for their wedding reception, and we also saw a few customers go back there to peer at the beautiful setup.

When our food arrived, we were very pleased with the presentations. Mom's steak was hidden under a fried egg and centered on a plate flanked with homemade fries and yellow rice. She said that her steak was very tender and did not have any pieces of fat. She also raved about how good the steak tasted topped with the egg. I was so proud of her! She enjoyed her fries very much and said the rice was quite appetizing. All in all, she had a very delicious, and adventurous, lunch. A far cry from spaghetti! 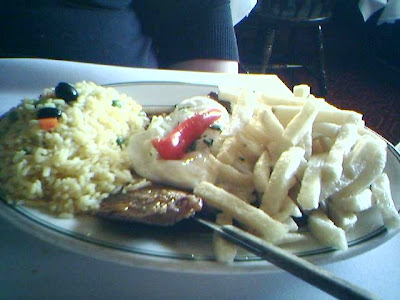 My meal was fantastic. My fillet arrived with white potatoes (which I didn't expect) and yellow rice. The potatoes were delicious because they had soaked up some of the spicy Portuguese sauce that my fish was topped with. The fish was extremely flaky, white, and tasty. It also absorbed the flavor of the sauce and of the peppers that sat on top. The veggies were fresh and the rice was tasty. The only complaint I have was that the waitress did not come over once during our meal to see how it was. If she did, I would have asked her for water because my dish was spicy! 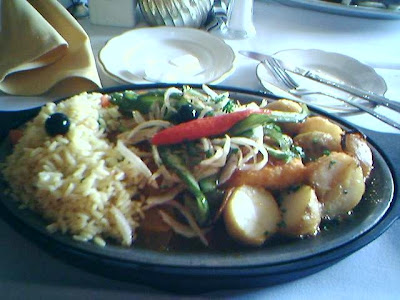 After I managed to track down our waitress to ask for some water, she brought me a pitcher of it, but neglected to give me a separate glass. At this point, my mouth was on fire so I didn't care if there were Pepsi remnants in the glass or not - I just wanted to cool down! This was literally the last time we saw this woman for a good 15 minutes (or maybe even more). She seemed to disappear into oblivion, and I was confused as to why because we were the only ones in there. It's not like she was busy serving other people. I don't know what was going on, but I was starting to get a little antsy. Finally, she appeared and cleared our plates. My mother then informed her that we had a coupon, but the waitress told us that we could save it to use for another time (at first we didn't think she was going to take the discount off our bill, but we figured out that she meant for us to keep the coupon to use again). Another five or ten minutes went by before she brought the check:

*Figure it out? Yeah, I can't either, ha, ha. The total is off, but I could see that she did take off the $9.95 from the coupon (the coupon read "free dinner," but the value was only up to $9.95, and conveniently all the dinners started at $10.95). The total is exactly what it should be for two meals without sodas and tax. Whatever. I was just glad that we finally got the check and could pay. The slow service was really putting a damper on my delicious experience. I do like that they added in the 15 percent gratuity, but I usually leave 20, so in this case the rule kind of screwed our waitress. As we left the restaurant stuffed, both Mom and I remarked that we would love to come here again to try the Chouriço á Bombeiro, and I would like to get a steak for myself as Mom's looked so good. Although the service could be a little faster, we enjoyed ourselves and would definitely visit again. I'm glad Mom's walk on the wild side resulted in a very satisfied customer.

Lusitano is open Wednesdays and Thursdays from 3-9 p.m., Fridays and Saturdays from 12-9 p.m., and Sundays from 12-9 p.m. They are closed on Mondays and Tuesdays, and they have a Sunday Lunch Buffet from 12-4 p.m. There is live music on Saturday nights, and the restaurant was featured on Emeril Live in 2003! This is really a great place to get some of Fall River's delicious Portuguese food, or to host a fabulous wedding reception.