856 Scenic Highway
Bournedale, MA 02532
(508) 272-8749
www.barlowsclamshack.com
<
After an unsuccessful trip to Dottie's Frozen Custard in Hyannis, which no longer existed, Mom and I were in the mood for something cold. Although there were plenty of ice cream places to visit along busy Main Street, parking was a mess, so we decided to head back to Route 6 West to visit one of the clam shacks overlooking the Cape Cod Canal. Surely one of them sold ice cream.
<
Success!! As we were heading back toward Fall River, we came upon Barlow's Clam Shack at around 5:30 p.m. We saw an "ice cream" sign in front of the building and quickly turned right into the small parking lot. We spotted the outdoor order window on the side of the building and walked up to the front. 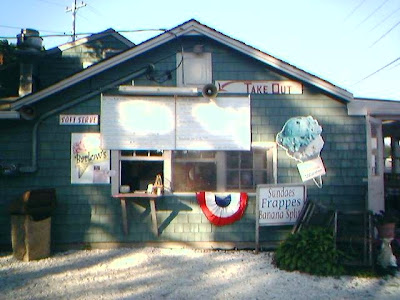 The girl who greeted us was very polite. She informed us of the various ice cream flavors they had, one of them being "lobster tracks." It is just like the familiar Moose Tracks ice cream, only instead of chocolate moose, there were red lobsters folded into vanilla ice cream. Barlow's also has things like banana splits, chocolate malts, peanut butter sundaes, frappes, and soft-serve vanilla, chocolate, and twist cones. Nothing was over $5, and Mom and I had a tough time deciding what we wanted. We finally settled on a small blueberry ice cream cup for me, and a small cup of coffee for Mom. The server served them up with lightening speed, and the price was only $5 (each scoop being $2.50). 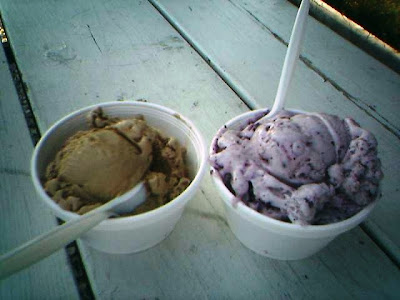 We decided to sit in their picnic bench area, which was fenced off from the parking spots and extraordinarily clean. There were several white tables with big sun umbrellas to shade the patrons. The ice cream was delicious and was just what we were looking for on this warm New England afternoon. 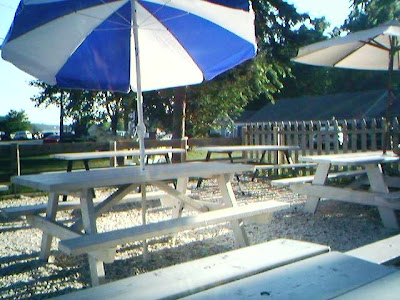 We saw a few more cars pull into the parking lot. Some people were getting ice cream and some were going inside for a meal. Barlow's has a Website that lists their menu, and we look forward to going back to try some of the delicious seafood they offer. They also have a gift shop inside the restaurant. You can tell that this place has been around for many years and is a favorite among both the locals and the tourists. We loved it.
Posted by New England Bites at 12:45 AM