1393 Rodman St.
Fall River, MA 02721
(508) 678-8935
<
Located at The Regatta
392 Davol St.
Fall River, MA 02720
<
When thinking of New England, especially Maine, most people have lobster on the brain. Lobster is something that I've only had once while on an adventurous trip to D'Angelo's. I ordered the lobster bisque, and although it wasn't terrible, it wasn't that good, either. However, I figured that eating lobster from a fast food restaurant wasn't really giving it my all. I wanted to fully experience what fresh lobster tasted like without tearing apart that creepy outer shell. I wanted a lobster roll, and I thought that Tony's was just the place where I could get one.
< 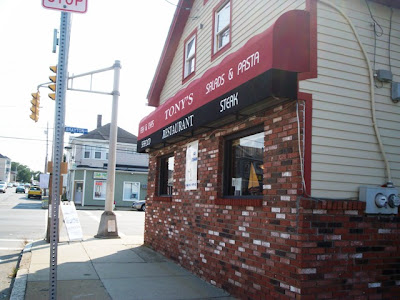 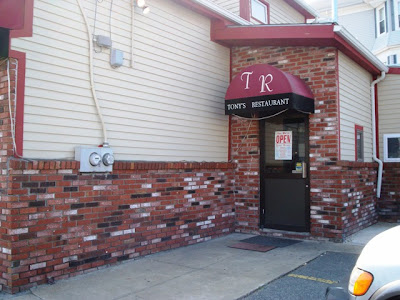 <
Continuing our "tour of Fall River," and after seeing many advertisements for this place in our local newspaper, Mom and I decided to visit Tony's Fish & Chips on Brayton Avenue at around 3 p.m. There weren't many cars in their small parking lot, but I was just glad that a parking lot actually existed as Brayton Avenue is a very busy street with parking on both sides. We went through the side door (which is the main entrance) and were greeted by a very friendly gentleman at the front counter who told us that we could sit anywhere in the dining room. As we walked around the corner into the dining room, we were followed by a young waitress who greeted us and put two large menus down on the corner table that we had chosen.
<
The dining room was much bigger than we expected. From the outside, the restaurant looks small. I always pictured two tiny plastic tables placed right up against a busy take-out counter. However, both Mom and I were very surprised and pleased at the interior. With mauve paint, place mats, and tablecloths, and a dark blue back wall for contrast, I felt very cozy and comfortable at Tony's. The low lights and ceiling fans gave off a very homey feel, and I loved the colorful flower placed on each table. The swinging wooden doors that lead to and from the kitchen were a nice touch, and the wood chair rail around the room carried that touch throughout the dining area.
< 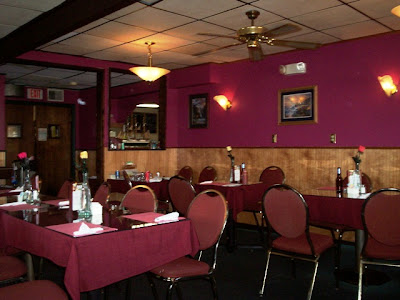 <
Our waitress took our drink order - two Diet Cokes - as Mom and I perused the menu. Tony's has quite a large selection of seafood and other dishes like steak, Portuguese, and Italian choices. While we were still deciding what to order, the waitress brought out two Portuguese buns with butter. She asked us if we were ready to order and we were. We ordered an appetizer of a half dozen clam cakes ($2.95). For our main course, Mom ordered the regular fish and chips ($9.95) while I chose the baked stuffed scrod which was filled with their own seafood stuffing. However, after the waitress informed us that my dish would take 30 minutes to prepare, I decided to choose something else. After looking over the menu again, I just could not take my mind off the baked stuffed scrod. When the waitress came back over, I told her that I would just suck it up and wait the 30 minutes for the scrod. Just as she started walking away, the friendly gentleman that we had seen before informed us that they had LOBSTER ROLLS. Apparently he had just gotten the lobsters in from Tiverton, RI. What a coincidence! Since I had not seen lobster on the menu, I had forgotten about my yearning to try it. I asked for one right away and was surprised that it was going to cost $15.95. I guess this is the price you pay when you order the fancier foods. I also had a freak-out moment when I was told that the claws and tail would be part of the roll. For some reason I started picturing the actual claws and tail in the shell, and stupidly asked if that was going to be on the plate. After some laughter from the gentleman and waitress, he informed me that the shell would stay in the kitchen. I don't know why, but there's something about seeing bit parts of a lobster sitting on a plate that makes me nervous. I don't mind the actual meat, but the shell? No thank you.
<
As we munched on the delicious Portuguese buns, Mom and I looked over a little sign that was on our table. The sign boasted that Tony's was the "Home of the Shipwreck." What is the Shipwreck? The Shipwreck, which serves three to four people, consists of fish, clams, scallops, shrimp, clam cakes, onion rings, and fries - all for $40.95. If you're brave enough to try to finish the entire Wreck on your own, and succeed, there is recognition to be had! The Shipwreck isn't the only seafood platter that Tony's makes. You could get smaller versions of this feast such as the Dinghy ($17.95), the Seafood Platter ($23.95), and the Baby Wreck ($29.95). Be careful - while the Dinghy and Seafood Platter are just for one, the Baby Wreck is for two. Tony's also has different size dinner orders of fried clams, scallops, shrimp, calamari, smelts, and clam strips ($7.95-19.95). These dinners come with fries, coleslaw, rice, and two sauces. Also on the menu are fish and chips ($3.95 for one piece to $12.95 for the large), and combination plates of various seafood choices ($11.95-19.95) that also come with sides. Portuguese dishes like the shrimp Mozambique ($12.95) and Portuguese fish ($10.95) sounded appetizing, as did their Italian dishes like the Seafood Pasta ($13.95) which consists of scallops, shrimp, crab meat, and littlenecks served over pasta. Tony's also has sandwiches, soups, and salads, along with a large list of appetizers ranging from a $2.50 stuffed quahog to a large platter of fried clams for $17.95. This establishment also serves alcohol.
< 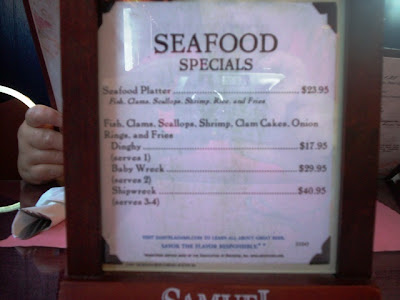 Our appetizer did not take long to arrive at all. Mom and I each had three of these piping hot clam cakes, which were a good size. The filling was soft and doughy, but it lacked the clam flavor. Also, both Mom and I thought that it was a bit hard cutting into the clam cakes. Perhaps they were left in the oil a little longer than they should have been, or maybe it was the batter that was used. The outside crust was just a bit too crunchy and hard. I found that I really had to soak mine with malt vinegar to alleviate some of the crisp texture, but despite this, they were very tasty. 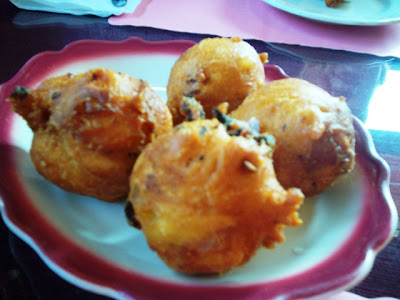 While we were having our appetizer, the gentleman, who we presumed to be the owner, asked us if we were from the area. We told him that we were, and he told us that we should come back in the evening for karaoke night. Although we are not the karaoke sort, it was nice for him to come over and make small talk with us as most owners are too busy or not interested in dealing with their customers. We later heard him (I believe his first name was Manny) speaking politely with a few other customers who had inquired where he had purchased the delicious Portuguese buns.

Before we knew it, our dishes were being brought out from the kitchen. The gentleman placed the dishes in front of us and they both looked amazing. Mom's order of fish and chips was quite substantial. It consisted of two large pieces of fried fish over a mound of fries. The fish was nicely done on the inside - all white and flaky. However, the outside crust suffered the same problems as the clam cakes. It was too well done; too hard and crispy. This beautiful, flaky fish would have done better with a lighter crust. Although the fish itself was delicious, the heavy batter made it a little bit greasy. The fries, however, were hot, hand cut, and delicious. 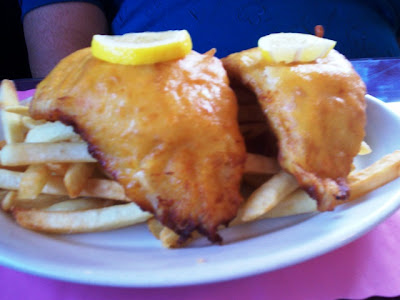 I couldn't wait to dive into my lobster roll. It came with fries and a little dish of mayonnaise. The hot dog bun was toasted and buttered, and stuffed with lettuce and the delicious lobster meat. I was informed that it was the entire lobster. I took one bite of it and ... well ... I'm not even sure what to say. It was very fresh, but ... I just didn't care for it. As I started eating more of it, I found that I really started to dislike the taste. I ate about three quarters of my sandwich before I finally had to stop. The results were in - I do not like lobster. The meat was tougher than I expected, but from what I've heard of lobster, that is the consistency. I'm used to flaky white fish, and this experience to me was like eating steak when all you're used to is chicken. The textures were different, and I just didn't enjoy the taste. I was so disappointed - not in the lobster, but because I really hoped that I would enjoy this meal. I would definitely recommend the lobster roll to any lobster fan because it was everything that it promised to be. However, it was my personal preference that was my downfall. 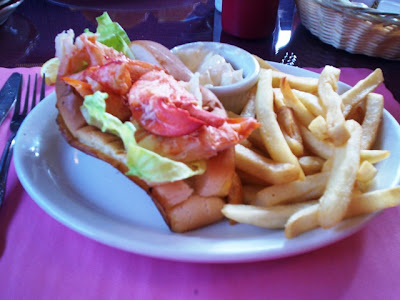 Mom was stuffed after only one piece of her fish and a few fries, so we asked for a take-out container for the other piece so that we could bring it home to Dad. The waitress brought over a Styrofoam dish and the bill:

I left $39 on the table (including 20% tip), grabbed the rest of Mom's meal, and headed for the door. Mom was able to get a take-out menu on the way out, and she was glad because she likes to collect them. I would definitely recommend Tony's to any seafood lover, and would also like to go back myself and try the baked stuffed scrod and the Portuguese fish. Tony's is closed on Mondays and Tuesdays, but is open on Wednesdays and Thursdays from 11 a.m. to 8 p.m., Fridays and Saturdays from 11 a.m. to 9 p.m., and Sundays from 12-8 p.m. They also have a second location that has just recently relocated to 392 Davol St. in Fall River (The Regatta).