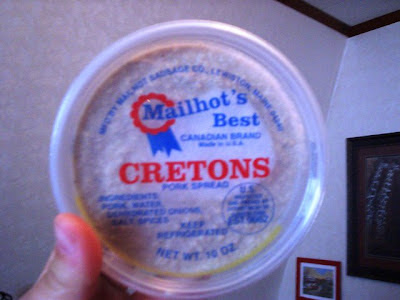 I know what you're thinking. Pork spread? Where does New England Bites find this stuff? The truth is, we've been eating pork spread for years. Normally seen in the supermarkets around here as "gorton," this spread is a French delicacy. Since we're French, I've been eating the stuff since birth and so has Mom. My memere (grandmother) used to make it for her all the time, and my aunt still makes it from scratch. The downside to loving gorton is that it is only spotted in the grocery store during the winter months. Well not anymore! Thankfully, a Canadian brand company called Mailhot's Best has decided to supply us with pork spread all year long! Although they changed the name from "gorton" to "cretons," the taste is still the same.


THE VERDICT: DELICIOUS!! It really is, even if it sounds gross. Made with pork, water, dehydrated onions, salt, and spices, it's really nothing to cringe over. We usually eat it cold and spread it over toast or English muffins. If you've ever had pork stuffing at Thanksgiving (which we Frenchies do all the time), it tastes almost exactly like that. It's got a real comfort food kind of feel to it, and it's full of protein for those people who need an extra boost of energy. It's also full of fat, but the dancing pig in a tutu on the label should have already tipped you off. I think everyone should try Cretons at least once. It may be a one time thing, or this yummy pork spread just may become a part of your family. It's always been a part of mine!
Posted by New England Bites at 1:00 PM