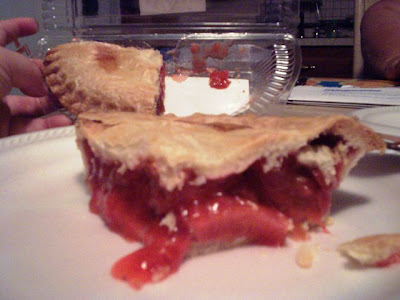 Who leaves the house at almost 10 p.m. at night to go to the supermarket and get a pie half? New England Bites - that's who! Bored at home this evening, I was looking for something to peak my interest. Since trying new foods always works, and I was craving something sweet, I decided to steal some money off of Mom and try something I'd never had before - strawberry rhubarb pie. Luckily for me, Stop & Shop usually keeps this particular pie half in stock at all times. It must be popular. Also, if it tasted like crap in a crust, I would have only purchased half a pie, so there wouldn't be too much to get rid of. So, with smeared eyeliner and a ratty ponytail, I trudged out to Stop & Shop to get me some pie. I blended quite well with the nighttime shoppers, and was pleased when I noticed that there were plenty of pie halves available ($2.99 each). When I returned home, Mom - not wanting to stray from her diet (a.k.a., she doesn't like strawberries or rhubarb) - declined when I offered her a piece. I cut the pie half in two and offered the other slice to Dad, who was in bed and just about to go to sleep. Apparently in this house, being under the covers with your eyes half shut does not exclude you from participating in Bite of the Week.


THE VERDICT: Delicious! I found it to be sweet because of the strawberries, but Dad - complete with sleep crusties in his eyes - found it to be tart because of the rhubarb. He's eaten raw rhubarb before and said that it was very bitter and overpowering - so much so that he had to stick it in sugar before eating! Although I found the filling a bit on the liquidy side, it was probably because it was made with fresh fruit and not a jelly/jam spread (thank God). I was very pleased with my impromptu choice, and so was Dad. Now that Dad has finally gone to sleep, I can cross eating strawberry rhubarb pie off of my "1000 Things to Do Before I Die" list. Only 999 more things to go!
Posted by New England Bites at 11:00 PM