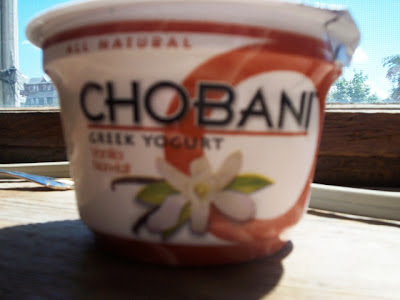 Since we've been featuring some pretty nasty junk food lately, New England Bites has decided to feature a food that has been making headlines - and is actually good for you! Greek yogurt, which has been around for centuries, is suddenly all the rage because of its active cultures (including probiotics), abundance of healthy protein (36%), and lack of fat and synthetic hormones. After trying two popular brands called Fage and Siggi's (which is actually an Icelandic brand with similar components), Mom and I felt that we now knew what we were looking for in a Greek yogurt. We wanted something that was cool, creamy, and that had a lot of flavor. Mom spotted Chobani at Stop & Shop a few weeks ago ($1.25 on sale) and decided to try one. Since she enjoyed the taste, she suggested that I get one this week and let the world know how it tasted.

THE VERDICT: Pretty good, although Mom liked Fage better. Although she loved the mouth feel of Chobani, which had a very similar whipped cream consistency to Fage, she said that the bitterness of the yogurt tang was a little off putting. However, she feels that it would make a great smoothie if you mixed the yogurt with some fruit and skim milk. Although I agreed with Mom, and am looking forward to trying the other flavors (blueberry and strawberry), I found it to be a bit drying. The back of my tongue felt like sandpaper, but that was nothing compared to the ER visit I almost had after eating Siggi's. I thought my mouth would never salivate again. It was horrid! I don't know why this type of yogurt dries out my mouth, but it does. Would I get it again? Yes, but I'll definitely make sure to have a glass of water standing nearby.
Posted by New England Bites at 2:00 PM