By now you all must have heard about the new Domino's Pizza. New sauce, new cheese, new crust ... same old price! But how does it taste?
You know we had to find out. So tonight, during the height of the snowstorm (nice huh?), Laura and I placed an online order for a large extra cheese and a large green pepper and onion pizza. It was fun to use their tracker to see what stage our order was at. First the order was in, then being assembled, put in the oven, etc., and finally it was to arrive at 5 p.m. And it did!

Well, you remember the old Domino's, right? Nothing really wrong with it - except the taste. It was kinda blah and cardboard-like - more like a frozen pizza. The new Domino's, however, is a different animal ... or ... um ... pizza.

The cheese, in taste and texture, is more like real cheese. The sauce has a nice tang to it. But it's the crust - the Domino's crust - that has changed the most. No longer doughy and chewy, it has a crisp but flaky rim that tastes buttery and nicely seasoned. I think it's the biggest improvement on the pie. Hubby loved the new cheese. He said it wasn't stringy and chewy like the old one he hated. Laura and I were really impressed by the crust and just the general all-around better pie. It may not taste like your favorite neighborhood pizzeria just yet, but it's getting there. Definitely worth a call. I think you'll be impressed by the new taste. 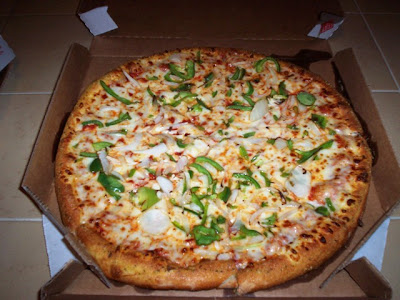 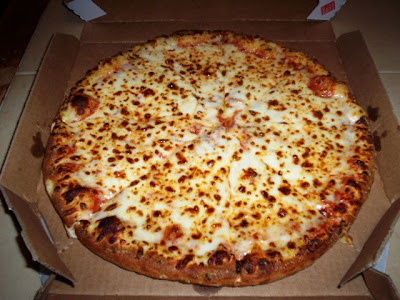