Bite of the Week – The Snapples of Celebrity Apprentice 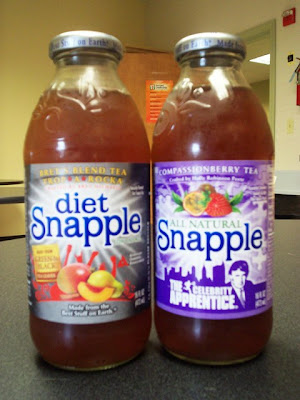 Hey folks!  Laura here.  I'm exhausted. Why? Because I’ve spent the past two days trying to track down the new Celebrity Apprentice Snapple flavors, and apparently the Bret Michaels version is impossible to find (or was – thanks for the suggestion, Melissa C.). Being psychotic, I drove to East Providence, RI, (22 minutes away) just to buy the beverage … and it was worth it. Hey Bret, you owe me gas money!

When I first watched the show and saw the Snapple flavors that Bret and Holly Robinson Peete had created, my friend Scott and I decided that we had to try them. Actually, we were really interested in Bret’s diet flavor “Trop-A-Rocka” because it had vanilla, cinnamon, pear, and a bunch of other ingredients that we both liked. As for Holly’s drink – “Compassionberry” – Scott proclaimed that he “would never buy a drink that was flavored with passion fruit.” Plus, he thought that Holly was an ass on the show, so that was probably another reason why he wasn’t interested in the drink. I should mention that Bret’s drink sales benefit the American Diabetes Association, and Holly’s benefit her own HollyRod Foundation for autism awareness. Oh, and in case you didn’t already know, Bret won. Hooray!

After the show ended, I casually looked around for the Snapple flavors. I checked Stop & Shop and 7-Eleven first, to no avail. I asked Scott if he’d seen them anywhere, and he hadn’t. His friend Greg, who was also a fan of the show, had also been searching for the drinks and kept coming up empty-handed. It wasn’t until I saw that my friend Melissa had tried Trop-A-Rocka that I was determined to find it for myself. Who knew that it would take two days and a lot of gas money?

Since Scott and I live in different cities, we decided to split up. I started my heavy-duty searching on Monday, and he began on Tuesday. I think he said that he visited seven stores, and I think I hit between 12 and 15. I had read online that the drinks were being spotted at Cumberland Farms, so of course, that was my first stop. To my surprise, I found Holly’s drink on Monday at the Swansea store on GAR Highway, and the Westport store on Route 6. Since Scott wasn’t totally into it and Mom hates fruit drinks, I bought one bottle for me to have (and for Scott to sample). I brought it to work on Tuesday and the two of us spent about 10 minutes in his cubicle sniffing, swirling, and tasting that Snapple like it was a Chardonnay.

As for Bret’s drink, as a last-ditch attempt at finding one, I decided to call the Cumberland Farms on Broadway in East Providence. Melissa had told me that there were Snapple sightings at that store, but I wasn’t about to drive all that way for nothing. A guy answered the phone and I asked him for the drink. He handed the phone to someone else (I heard the words “something about a Snapple”) and it was verified – they actually had Trop-A-Rocka. Immediately, I threw on my flip-flops and drove all the way there – GPS in hand. I went in and spotted it – about seven feet off the floor on the top shelf of the cooler. WTF?! Short people need drinks, too. I almost had to ask someone for help, but I figured that I was pushing my luck with this store after asking them to check for a specific Snapple flavor. Who does that? Anyway, I got a Trop-A-Rocka for myself, one for Scott, and a third for Greg. I also got Greg a Compassionberry, which is also sold there. I figured it was a “now or never” situation, although the drinks will probably be everywhere in the coming months. When I plopped them at the cash register, I revealed myself to be the nut job who called earlier. The cashier said, “Which one?” Apparently, everyone has been calling about the Snapples! Another cashier shouted, “What is going on in that bottle?” After some discussion about who the guy was on the front of the Trop-A-Rocka (one guy shouted “Bret Michaels” just before he realized that it was Donald Trump), and after having forgotten to turn in my 75-cents-off-two-Snapples coupon, I was on my way home.

THE VERDICT: Bret’s Snapple was definitely a winner over Holly’s. Not only did it have less calories and sugar (10 vs. 180 calories; 0 vs. 44 sugars), it had a much more pleasant taste. The Trop-A-Rocka was flavored with mango, pear, vanilla, cinnamon, and many more subtle fruits, while the Compassionberry’s predominant flavors were passion fruit, strawberry, and basil. If it weren’t for the basil, this drink might have been a bit harder to deal with because it was quite tart. What Scott liked about Holly’s drink was the smell; it was very fruity and fragrant. Other than that, he said that although it wasn’t horrible, he was definitely glad that he didn’t buy a bottle for himself. Bret’s tea, on the other hand, was mildly fruity at first but had a vanilla aftertaste that was really delicious. We both enjoyed it very much.

As for Greg’s opinion? He, along with Scott, thought that the Compassionberry tasted like a salad because of the strong basil flavor (which wasn't as noticeable for me as it was for them).  Scott compared it to the tomato and mozzarella salad from Starbucks.  Greg went into this taste taste thinking that he would enjoy the Compassionberry more.  Wrong!  He preferred the Trop-A-Rocka, which seems to be the general consensus among my other friends who have since tasted the drink.  Yay Bret!

I’m so glad that the Snapple search is over!
Posted by New England Bites at 10:33 PM