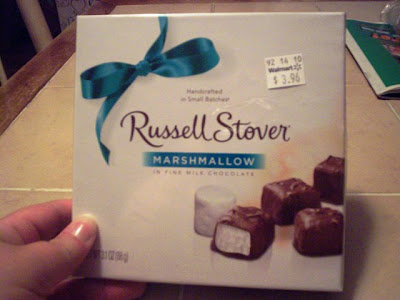 If you know me , you know I'm not a big candy eater . Don't get me wrong , I love looking at it , tasting it , buying it , buying it as gifts . What's not to love about candy ? So what's the problem ? Candy doesn't love me . It makes me cough . Yes , cough , complete with choking , watery eyes and runny nose . How can candy turn on me this way when I love it so much ,or at the very least , admire it from afar ? Well, it does turn on me so I pretty much keep my candy eating at a minimum . But one thing I can't resist ( even if I choke to death ) is a chocolate covered marshmallow . Such a simple delight but I've never found a candy I like better . ( cough cough ) I used to raid my mother's RUSSELL STOVER gift boxes and eat the marshmallows before anyone had a chance to take one . I could pick them out just by their shape . At every holiday I could find a chocolate marshmallow bunny , egg , tree , Santa or pumpkin and happily let everyone eat anything else . So this past Saturday , while shopping in WALLY WORLD ( Walmart ) , I had no idea of the surprise that awaited me . Laura said ,"Ma, I don't even know if I should show you this ." Then she held up a small box of RUSSELL STOVER CHOCOLATE COVERED MARSHMALLOWS ( except they were called" marshmallows in fine milk chocolate" ) . Whatever , these were the candies of my youth , the ones I stole and the ones I will cough up a storm to eat . PUT THEM IN THE CART ! (cough cough )

Sunday afternoon we took them out of the fridge to devour them . There were 9 little candies in the box. It was a 3.1oz. box and is one of RUSSELL STOVER'S new " all one flavor " packages . This is great . Now you can have just your favorite flavor without having to buy a big box of mixed . Plus they sell for $ 4.99 but were less at Walmart ($3.96).

VERDICT:  I think we made a mistake eating them out of the fridge . We should have waited for them to warm up a little . They tasted like fridge , know what I mean . I also didn't find them as big ,nor the marshmallow as fluffy ,as the ones in the big boxes . These were sort of flatter and square and the marshmallow more condense. They tasted good but not as good as the ones in a regular box . I want to try them again , giving them time to come up to room temp. But I can't do anything about the flatter marshmallow . Hey RUSSELL STOVER , if your going to go to the trouble of making us our favorite flavor in it's own box,then make them exactly the same as we love them .