A few weeks ago Laura and I were all psyched up to go to THE GATEWAY TAVERN in Wareham for our Saturday luncheon outing . I had read a ton of very positive reviews and we were anxious to give it a try . We even read their on-line menu ( which is quite large ) to help us decide what we'd like . They had some things we've never tried before and we decided to be very brave and give them a go . Plus we were very surprised to find it is exactly across the street from another favorite place of ours , KOOL KONE . 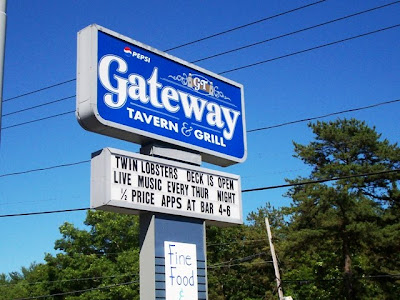 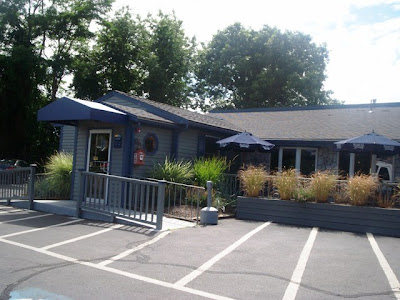 It was a warm and sunny day when we arrived around 3 p.m.  As we entered through the attractive bar area we were met by a waitress who told us we could sit anywhere we wished . Goody ! We wished to sit out on their large deck overlooking the water , and we did . It was beautiful out there . The deck is roomy , has several tables and has an overhead roof to protect from the weather . I want this deck attached to my house . lol A very nice waitress came and took our drink order and give us menus . Now here's where we get very fancy - very unlike - well - us . We both ordered an espresso martini and decided to start with the baked brie with maple - walnut glaze with sliced apples and warm baguette . WHOA !!!! What was that ??? US ?? Yes , we were going all out today . And we were going to take pictures of everything for you - our dear readers . And then the camera broke . Done - no juice - wouldn't recharge - needed a whole new battery . You had to be kidding me . The only thing we managed to get a picture of was the deck and the drinks . 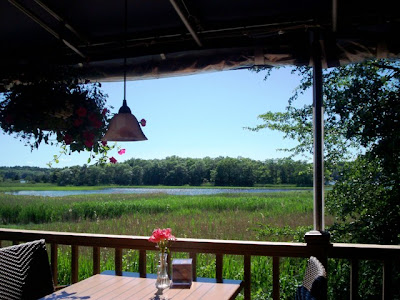 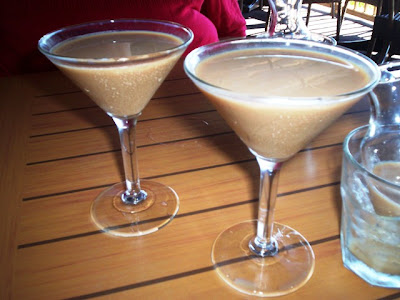 But , dear readers , we wanted to share with you the rest of our adventuresome meal . Besides the amazing brie appetizer , we shared a free-range bison burger . Yes , me , who won't eat a pickle , ate a bison burger and loved it . Then we shared a large slice of lemonberry mascarpone cake - all things we've never had . OMG - we wanted to show you everything ....but we couldn't . We vowed then and there to return with a fixed camera and do it all over again . Exactly the same , well maybe with a few tweaks .

Saturday, July 10 - So here we are again at THE GATEWAY TAVERN , at 3 p.m., on the deck , just like before . Only this time the camera has a brand new battery . Cross your fingers . 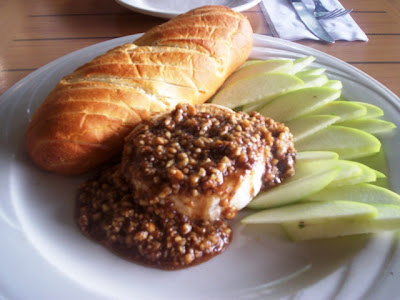 We decided to start with the brie appetizer again . Why ? Well , first to show you guys and second because it was so delish we wanted to try it again . lol Taking a slice of that warm soft baguette and spreading it with the soft melty brie , wow , amazing . The very thin slices of apple cut the richness of the bread and cheese and that wonderful maple glaze gave it just a hint of sweetness . What a melange ( fancy word ) of flavors . I'd have trouble NOT getting this every time I came . OH , I forgot to mention , this time we had our lovely waitress Taryn bring out our usual 2 - diet sodas instead of the " fancy " drinks we had before .First because we already had the picture but mostly because they were almost $8 a shot . lol 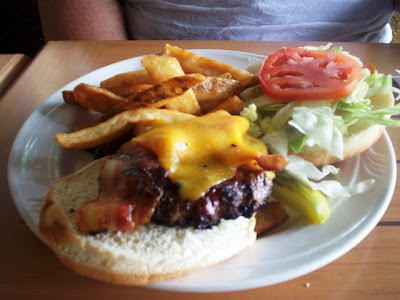 I got the bison burger again , both to show you and because I couldn't believe how good it was . It's like a great quality lean beef burger . Plus it comes on a big bun with a dash of BBQ sauce , cheddar cheese and a couple of slices of applewood smoked bacon . It was accompanied by some great thick fries that were done perfectly . And a pickle , which I promptly gave to Laura ( see I told you I won't eat pickles ) . I can't believe I've eaten two bison burgers within a couple of weeks . Amazing . 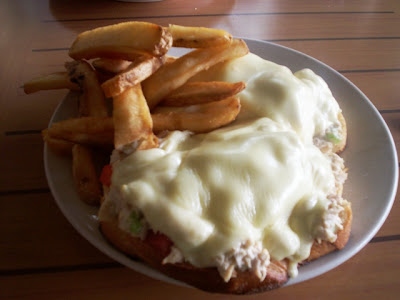 Since I was keeping the bison burger to myself , Laura decided to get a tuna melt . She really enjoys these sandwiches , especially when they're done as well as this one was . It was on large slices of sourdough bread and packed with the tuna salad and topped by tomatoes and melty American cheese . It looked fantastic and she was thrilled with it . She also got some of those fab fries and a pickle . 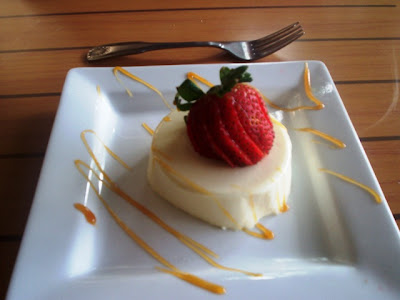 To end our fantastic meal , we decided to share a vanilla panna cotta which is a classic Italian custard topped with strawberries . It was light , cool , delicious and a perfect end to our meal .

THE GATEWAY TAVERN has an extensive and interesting menu . You should have seen the size of the seafood platters , fried clam plates , fish & chips etc. that we saw going by. They were HUGE ! Laura and I could easily have shared one plate and we intend to do just that very soon . Besides the above mentioned seafood , they have various salmon , scallops , haddock and shrimp dishes . Plus they boast the largest lobster roll on the Cape . They also have ribs , pork chops , duck and chicken and of course several different steaks .They also carry pastas and pizzellas , burgers and sandwiches . Add to that a great list of appetizers , soups , chili , chowder , salads and desserts . You can't ask for anything more . Check out their website to see their great menu .  As for us :

We left $51 on the table for Taryn , who was a terrific waitress , checked out the ladies' ( as is our habit ) and found it immaculate and went on our way (and took a picture of the cute decor while we were in there). We know we definitely will be coming back here . Hey , maybe I like trying new things . Except pickles . 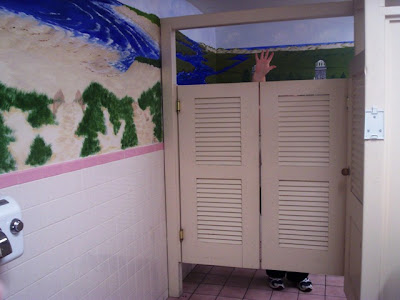 P.S. One thing we learned while enjoying ourselves on the deck . Watch out for bugs ! Especially on a hot , steamy day . Laura stood and shook herself when I reached over to flick some striped bugger ( lol ) from her neck . I almost left when this HUGE spider decided he would come down the wall to " visit ' me . And the man seated at the next table startled us by slapping his arm loudly when some long " thing " landed on him . Ah , the joys of dining alfresco . But I love it . And I love this deck .

P.S. again ---- While dining a man came in with his young son ( I'm guessing 4 or 5 ) . The kid was immediately taken with our table ( because we were seated near the BIG fan ) . He started to whine to his father that he wanted to sit there . The dad told him they couldn't because the " ladies " were sitting there . Well nothing could placate him and he couldn't even concentrate on his meal . He whined , he cried , he squirmed and generally drove his father and the waitress NUTS with his behavior . He wouldn't eat any of his food ----a nice plate of fish & chips , " asked-for " slices of bread & butter , and a bowl of ice cream ( why he got that I'll never understand ) . NOT ONE BITE did he take . He kept asking his dad ........ARE THEY LEAVING YET ? WHY DO THEY GET TO SIT THERE ? I WANT TO SIT NEAR THE FAN . IT'S NOT FAIR !!!!!!!!! Over and over and over . Well, Laura and I decided right then and there that we would eat the whole menu before we let that kid get our table . Juvenile - yes . But this kid needs to know that just because you want it , doesn't mean you're going to get it ,especially if someone has it first . Life lesson .

P.S. #3 .... Visit our good friends at MenuJoy.com and get some great area restaurant menus.
Posted by New England Bites at 8:23 PM