Believe me, if I lived closer to Yia Yia’s Pizza Café, I would definitely adhere to their slogan. Mom and I had a fantastically delicious lunch here, but unfortunately, the service was lackluster (and if you know us, you know that we're not usually complainers). Let me explain … 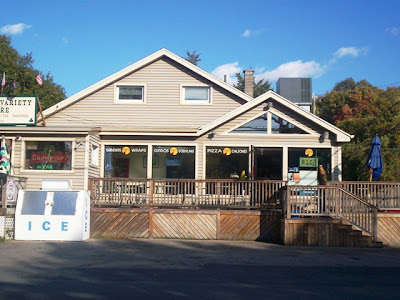 I specifically chose a gift certificate to Yia Yia’s from our friends at MenuJoy.com because of the great things that I read on the Internet about this place (click here to read the menu). I read that the pizzas, subs, and salads were amazing, and since I’m very into Greek pizzas, I couldn’t wait to stop in and have one. Mom and I pulled into the small parking lot at 2:15 p.m. and went inside. Yia Yia’s is a very tiny restaurant with only three tables and a few stools at the counter. A small soda case stands near the restrooms, and a help-yourself condiment bar rests against the side window. Mom and I wanted to dine-in, so she chose the last table at the back of the restaurant while I went to the counter to place my order. I waited ... and waited … and waited until the young girl behind the counter decided to look up and ask me what I wanted. I hesitated a little because I thought that she was going to stop and write down my order, but she just continued to slice into a large piece of meat. I shrugged and ordered anyway because Mom and I already knew what we wanted from checking out the Yia Yia’s online menu. I chose a small extra cheese pizza for Mom, and something called the Greek Villager (small) for myself. I actually thought my pizza was called the Grecian, but since the girl had no idea what I was talking about (“Um … is that a pizza?”), I realized that I had the name wrong. My mistake. I also asked for an order of fries, and told her that I was taking two bottles of Diet Pepsi from the soda case. The girl did not respond, so I was hoping that she actually heard my order correctly. 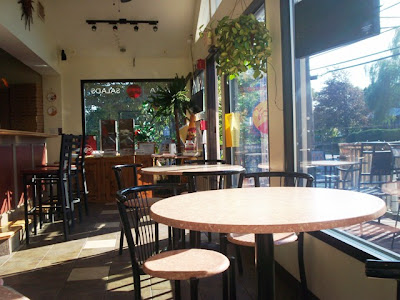 When I joined Mom at the table, I noticed that it was quite sticky. Perhaps since the table we chose was the furthest away from the door, the staff forgot to wipe it down. Either way, I made do with the stickiness and waited for my pizza. While we waited, this horribly irritating couple – who seemed to know the staff very well - was sitting next to us. I mean right next to us. Because Yia Yia’s is so small, there is really not enough room for two people to sit comfortably without another couple almost joining in their conversation. It probably would have been better if the couple kept to themselves, but they kept turning around to face us – even when the food came. How rude! Keep your eyes (and ears) at your own table.

When the food finally came (which really didn’t take too long considering all the pizzas are cooked to order), Mom and I were thrilled. Both pies looked amazing and my Greek Villager was all you could smell throughout the restaurant. The only thing missing was our order of fries, which the waitress had forgotten. She didn’t just forget to bring them – she forgot to make them. We didn’t say anything because a) I expected it because I knew she wasn’t paying attention, and b) we were on the fence about getting fries anyway because we were mainly there to eat the pizza. Still, I would have liked to get what I ordered. Since I knew I was going to need a knife and fork, I went over to the condiment bar to get some plates, napkins, and utensils. I noticed that there were no more forks, and when I notified the waitress, she abruptly pointed out that I needed to hit the “push” button on the automatic fork dispenser. Obviously, I had no idea that the dispenser was automatic or I never would have bothered her with such a stupid thing, but nonetheless, the male customer started laughing because apparently the whole thing was hysterical. 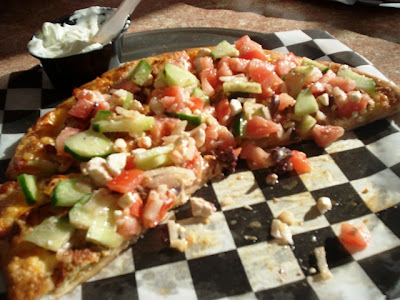 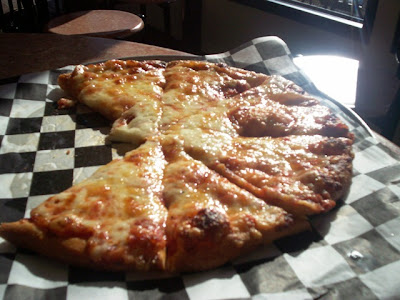 The pizzas were fabulous. We had to wait until the couple on the side of us left to take pictures (hence my half-eaten pie).  Mom’s pizza was layered with tasty mozzarella and flavorful sauce sitting on a thin, crispy crust. She said that it was excellent and only left two pieces of her small pie behind, which is rare for her. She really enjoyed it. Compared to Mom’s simple choice, my pizza was like an event. The Greek Villager, made on the same yummy crust, was sauceless and topped with marinated chicken, cucumbers, onions, tomatoes, kalamata olives, feta cheese, and homemade Greek dressing. It also came with a side of Tzatziki sauce which was cool and creamy. It was wonderful and despite it being so filling, I managed to only leave two pieces behind as well. I couldn’t leave it alone. The vegetables were so fresh and the chicken was perfectly cooked. It was one of the best pizzas that I’ve had in a long time. Both Mom and I commented that the pizzas were much better than the service had been thus far.

After stuffing our faces, Mom and I had a movie to catch. I went to the counter and asked the same girl for a takeout box. She handed me a small pizza box where I placed Mom’s and my two pieces of pizza. I then brought up our dishes and attempted to pay for our meal. I waited … and waited … and waited … and was told to wait some more by a gentleman that was waiting on a customer who had a takeout order. Other than that, Mom and I were the only ones in the restaurant (the annoying couple had left after they watched Mom and I eat). The girl, who had been the only one waiting on me, stood there making a sub while I stood there looking at her. Was she honestly just going to leave me up there while I was waiting to pay? Yep. She looked up at me and made no motion to cash me out. When the guy behind the counter finished what he was doing, he finally came over. He repeated my order (still minus the fries) and gave me a total of:

I handed him my $10 MenuJoy.com gift card and $11. He was surprised to get the gift card and asked me where I got it. I said, “MenuJoy.” He said, “You got this from online?” I said, “Yes, from MenuJoy.” Please note that they have a few MenuJoy.com signs up in the restaurant, so I was surprised to see how shocked he was to have received a gift certificate from them. I went over to Mom, who was wondering what had been taking me so long at the counter. I just rolled my eyes, grabbed our takeout box and our bottles of Diet Pepsi, and left the restaurant.

Will we be back? Definitely. Will we stop in for a sit down meal again? Probably not. Yia Yia’s Pizza Café has excellent food. Even the sandwiches that Mr. and Mrs. Annoying ordered looked and smelled amazing. However, the service just wasn’t there and we don’t want that to ruin our Yia Yia’s pizza-eating experience. Mom and I hope to return soon and order some takeout, and we suggest you do the same ASAP. You will not be disappointed with the food – it’s out of this world. Unfortunately, the staff seemed to be on another planet as well.

Don't forget to visit our friends at MenuJoy.com for great area restaurant menus.
Posted by New England Bites at 12:26 PM