We did it!  We went back for breakfast and had their famous Johnnycakes.  Light and airy, these normally heavy cakes were full of that special whole grain flavor that separates Johnnys from their cousin pancakes.  No wonder Billy Joel gets them here! 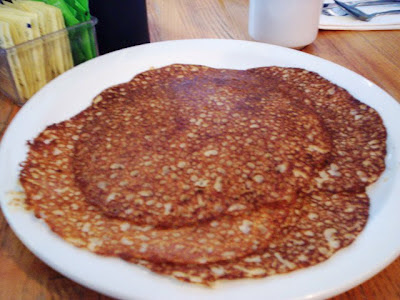 Hey guys! Laura here. Mom and I have been talking about visiting The Commons Lunch in Little Compton, RI, ever since we saw it on a road trip through the country. “It’s just so New England,” exclaimed Mom. She’s right. It is a cute little restaurant in the center of town where the locals congregate and get their grub on. Established in 1966, I figured that now was a good time to finally stop in. We arrived on a beautiful Friday afternoon at 12:20 p.m. 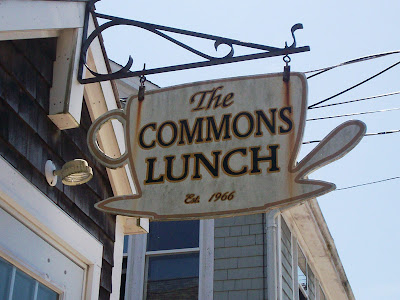 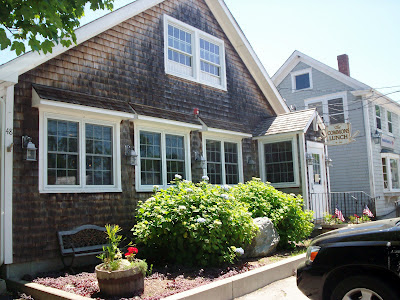 Once Mom saw that The Commons Lunch had an outdoor dining area, that’s all she could focus on. She’s obsessed with eating outside, so when we walked into the larger-than-expected restaurant, we headed right for the deck. We chose an umbrella-topped table by the door where our waitress Sherry came over and greeted us. We ordered two diet sodas ($1.85 each - not sure if they were Coke or Pepsi) while we perused the menu. 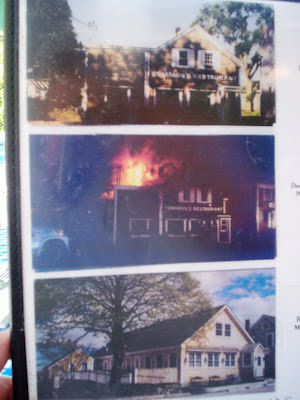 Their menu with pictures of the fire - before and after.

The Commons Lunch is heavy on seafood. After all, this is New England. With dishes like fried clams, quahog pie, and fish and chips, there is something for everyone. They also have quahog chowder that the locals rave about, and according to Quahog.org, singer Billy Joel always gets his Johnnycakes here. The Commons Lunch serves breakfast, lunch and dinner with tasty menu options like French meat pie and Indian pudding for dessert. Severely damaged by fire in 2004, the owners reopened Lunch in 2006. 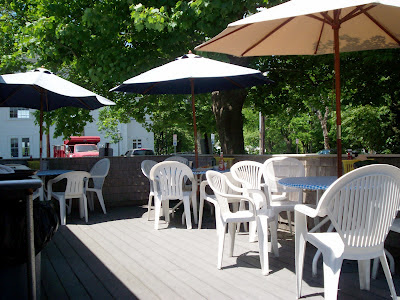 When Sherry returned to our table, Mom and I were ready to order. I chose the fried clam strip roll with fries and potato salad instead of cole slaw ($8.99). Mom ordered the deluxe fish sandwich topped with cheese and accompanied by fries and cole slaw ($8.99). We also decided to try their clam cakes, so we ordered a half dozen of them ($3.99). 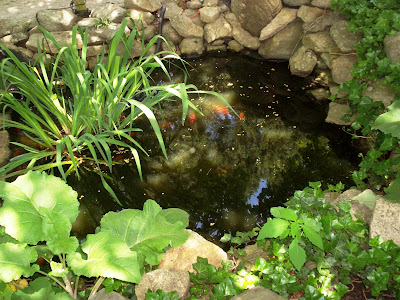 Although we didn’t see much of the inside, the outdoor seating area was lovely. There were about eight to ten tables on the deck, along with a server’s area against the building and ramp for those who need one. There is a koi pond just below the deck and a beach-themed novelty store behind the restaurant. 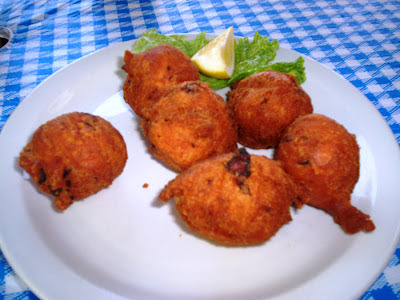 Sherry brought over our clam cakes and they looked great. Although she had forgotten to bring over extra plates (I like to douse my cakes with lemon and white vinegar but Mom doesn't), we made it work. The clam cakes were very tasty, although the batter was a bit crisp for us. I like a softer (but not limp) texture. Mom agreed. 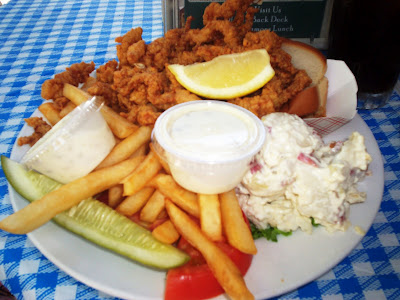 We hadn’t quite finished our appetizer when the two meals arrived. Both plates were much larger than we expected! My plate was overflowing with juicy clam strips and a buttered, toasted roll. Also on the plate was a large serving of fries and a generous helping of potato salad. Everything was cooked perfectly. The strips were nicely battered and had a fresh taste, the potato salad was cool and made with thick cuts of red bliss potatoes, and the fries were crisp yet full of potato taste. It was an excellent lunch and I was stuffed to the gills! 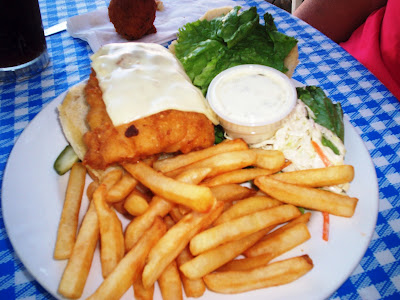 Mom’s deluxe fish sandwich was deluxe indeed! Served on a buttered bulky roll, her large piece of fish could barely be contained. It was white and flaky with a nice crisp batter.  The melted cheese on top gave the fish an extra kick of flavor and Mom really enjoyed her fries. It was an excellent meal all around.

Sherry brought over the bill while Mom and I took turns using the ladies’ room. It was very clean and organized. Our total came to: 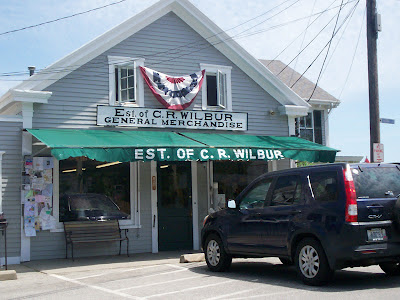 The Commons Lunch is the perfect place to go if you’re looking for a local place with a lot of New England flavor. Whether you like fine dining or you’re more the burger and fries type, your palate will be satisfied with everything The Commons Lunch has to offer. Stop by the local general store on your way out of town. Established in 1893, Wilbur’s General Store has everything your heart may desire on a trip to Little Compton.

The Commons Lunch is open from 6 a.m. to 7 p.m. Sunday through Thursday and 6 a.m. to 8 p.m. Friday and Saturday.  During the summer the restaurant will be open until 8 p.m. daily.

Visit our friends at MenuJoy.com for local restaurant menus.
Posted by New England Bites at 12:52 PM