Pinkberry vs. Orange Leaf - The Battle of the FroYos


It was a late Wednesday afternoon and after seeing a terrible movie, we decided to try a Pinkberry frozen yogurt at the Providence Place Mall. 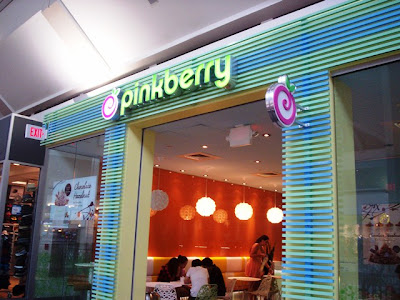 The place was small, but very hip. After all, I had heard this was some hip yogurt. It was darkly lit inside with some funky chairs and a bench strewn about. Maybe I wasn't dressed "cool" enough to be in here.
Now you have to get in line and follow the instructions posted above the counters:
1. You pick your cup size.
2. You pick your flavor of frozen yogurt.
3. You pick your toppings.
4. You pay.
Easy peasy right? Well it was. Laura and I both chose a small cup. Laura chose the new chocolate hazelnut flavor and I decided on the peanut butter. That done, we scooted down to the toppings bar where we told the server which toppings we'd like. They had loads of fresh fruits, nuts, grains and candies to choose from.You can get as many as you wish as long as they fit neatly in the cup. No topping overloads. Laura chose chocolate covered hazelnuts to complement her hazelnut yogurt along with some Mochi. If you've never tried Mochi, please do. It tastes almost like marzipan except it's a rice paste instead of almond. It's funky, but good. For my topping I chose granola. It really complimented my peanut butter yogurt very well and I was pleased with my choice. We found some seats to sit and enjoy our treats.  Our two cups cost a little over $10. 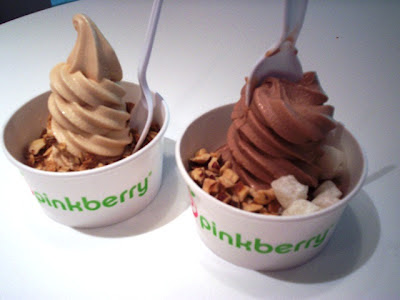 This was some delicious yogurt! It was very thick, rich, creamy and flavorful - more like a dessert. Laura thought her chocolate hazelnut was luscious and my peanut butter tasted as though I'd stuck my finger in the jar. So much taste!
I definitely want to come here again to try other flavors. It's not too cheap because you pay by the size of cup you've chosen, but it's so worth it. Pinkberry ... we'll be back.
**********
Driving back from the mall and Pinkberry and still trying to forget that rotten movie, we thought that it would be fun to stop in at the new Orange Leaf - another frozen yogurt shop - to compare the two yogurts. Now hold on - we are not little piggies.  This was purely for scientific purposes. Surely our fans would want to know which one we prefer. So sacrificing our blood sugar levels, we drove to Seekonk and to Orange Leaf. 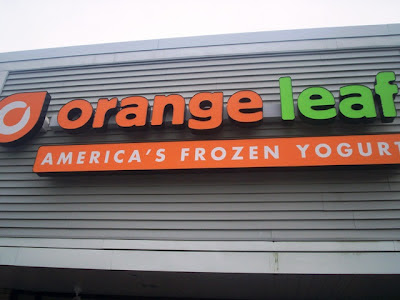 Walking in our first impression was this place must be a hit with kids. In contrast to the dimly-lit Pinkberry, this place was bright and colorful with crazy tables and chairs tossed about. Really cute. To be honest, one of our main concerns were that this place would be a mad house with kids running amok. It wasn't.
Here, the instructions were posted on the wall:
1. Pick your size cup.
2. YOU mix and match your yogurts.
3. YOU add in all your toppings, syrups and whipped cream.
4. Put your cup on the scale to be weighed and pay.
This is really a do-it-yourself kind of place, but it's also a lot of fun. We both chose a small cup.  After all, we did just come from Pinkberry - ha, ha.  They have several frozen yogurt dispensers to choose from. Each has two different flavored yogurt spouts and a third spout that gives you a mixture of both. I really liked being able to walk around filling my cup with different flavors. Into my cup I squirted some peanut butter, butter pecan, red velvet and vanilla yogurt. Don't worry, only a little of each. Laura helped herself to some pineapple, coconut and white chocolate strawberry yogurt. Then we went over to the toppings bar and, like Pinkberry, there were loads of fresh fruits, cereals, candies and nuts to choose from. Laura sprinkled hers with Maraschino cherries, blackberries and raspberries while I tossed some slivered almonds on mine. Then we put our cups on the scale to be weighed. Remember the heavier you make it, the more you pay.  Our total came to a little over $8. 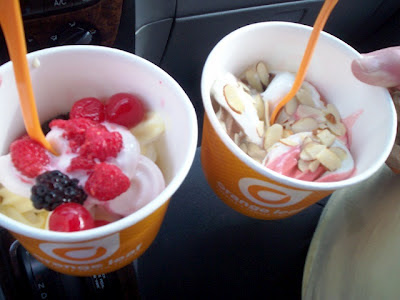 The place was really busy so we took our treats out to the car to enjoy.  They were excellent!  The yogurt is flavorful and the toppings are fresh. Plus, I'm not smart enough to mathematically figure out how many different combinations you can make. We really enjoyed our visit here and will definitely return (which we did a few days later).
You can't go wrong with either place, but I'd have to say the winner is ......... drum roll .........
<
PINKBERRY
Pinkberry is the wealthier cousin of Orange Leaf. It has a richer, creamier more flavorful yogurt and the whole atmosphere is somehow classier. So that leaves Orange Leaf the little black sheep of the family. But you know what, the little black sheep is the most fun. We think you'll enjoy both yogurts but you'll probably have more fun at Orange Leaf. Just be careful how much you fill your cup.  My daughter Mallory and her boyfriend Scott made this mistake and wound up paying over $20 for frozen yogurt.  Yikes!
<
Don' t forget to check out our friends at MenuJoy.com for great area restaurant menus.
Posted by New England Bites at 12:43 PM