We were headed “down the Cape” for the afternoon and wanted to try out a new restaurant, but we were having trouble deciding between two possibilities – one located over the bridge and the other just before it.  Before we knew it, our empty stomachs decided to cast the winning vote and chose the closer of the two – Eastwind Lobster in Buzzards Bay. 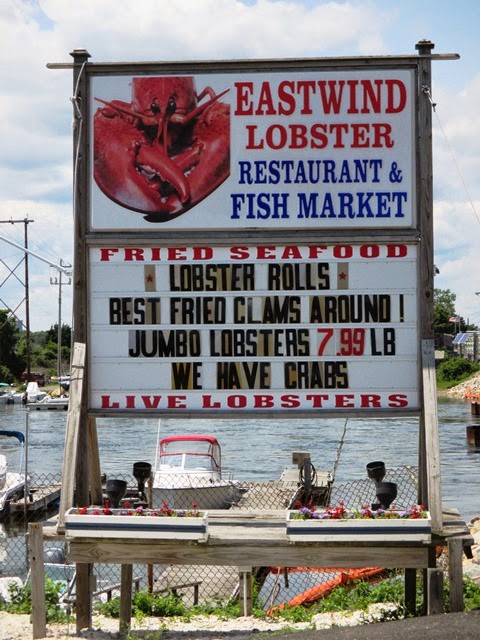 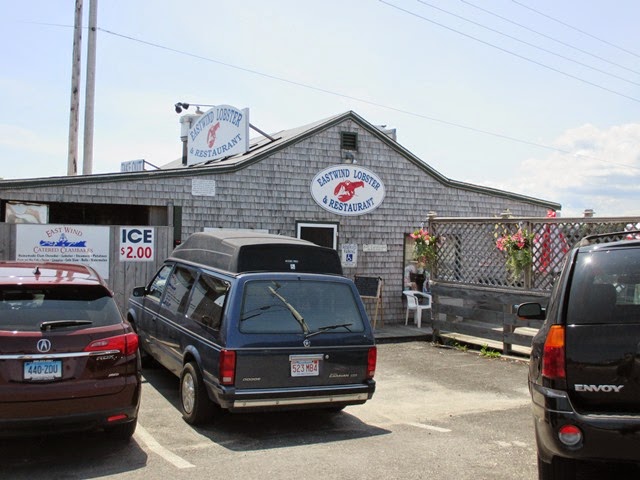 Mom had read great reviews online, so naturally we just had to pay a visit.  To be honest, the restaurant looks more like a bait and tackle shop from the outside.  I almost missed it completely until Mom shouted, “There it is!”  Since you can never judge a book by its cover – and since places like this usually serve fantastic food – we went inside for a seafood meal.

As we were walking in past a small outdoor patio we noticed a list of specials with prices – high prices.  You never know with seafood; sometimes it’s going to be high, sometimes it’s not.  We were just hoping that the portions were appropriate to the cost.

After a few seconds of deciding what we wanted to eat (click here to view the menu), I placed the order with the cashier.  We chose two bottled sodas ($3.76 total), an order of fish and chips ($10.99), a clam strip roll ($9.99), clam fritters ($3.99) and a cup of chowder ($3.75).  The total came to $34.75.  The cashier took my name and told me that she would call me when our food was ready, but she handed me my chowder right away, which was piping hot.  Mom and I decided to sit outside on the covered deck, which overlooked the Buzzards Bay Marina. 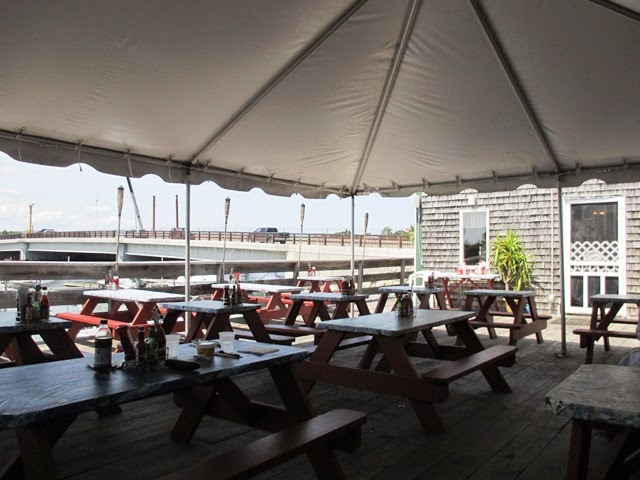 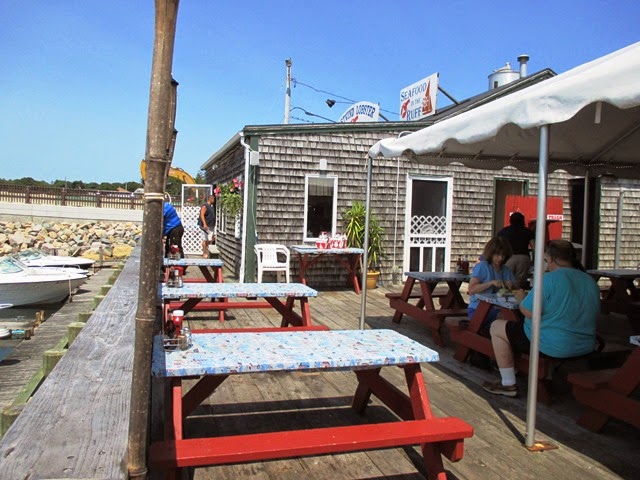 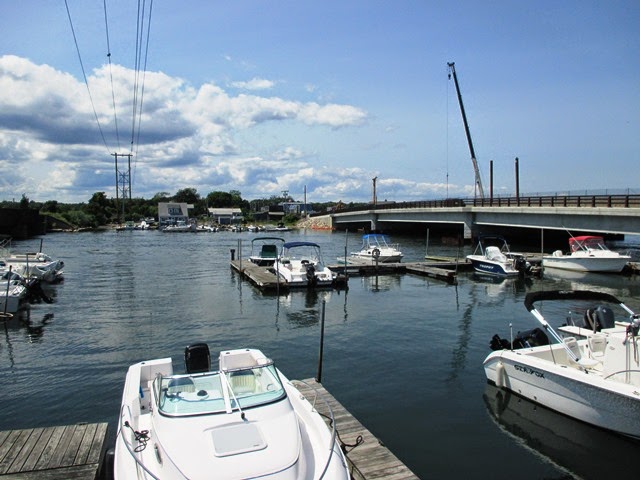 We chose a picnic table and I dug into my chowder.  It was excellent.  The broth was perfectly seasoned and the texture was thick and creamy.  There was a ton of clams – and I mean a ton.  Fresh clams in every bite, and that’s something that doesn’t happen often.  You can’t beat homemade chowder, and this one was fantastic. 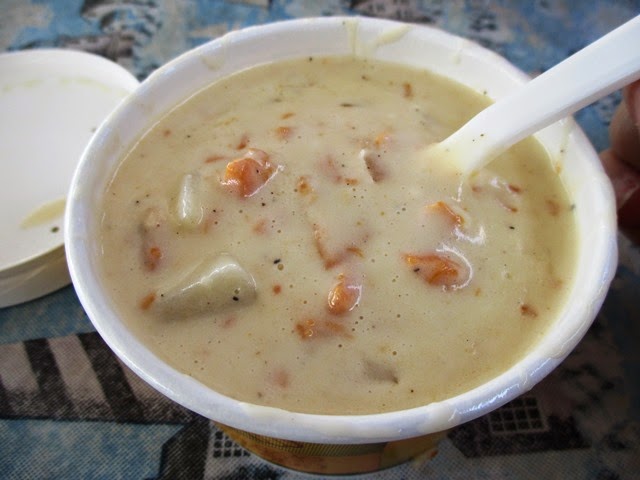 Before I knew it, my name was called and the food was ready.  When I went inside to pick it up, I started laughing when I saw the fritters.  They were huge!  Unfortunately, my clam strip roll was not.

It’s no secret that I love to eat.  I’ve had clam strip rolls in dozens of restaurants and I have to say that this was, by far, the skimpiest.  The skinny strips – which were greasier than I prefer – were perfectly seated in the toasted roll.  The last two times I ordered a clam strip roll, I had to eat half of the strips off the top before the roll was even noticeable.  I guess that’s what I was expecting on this visit, however, the sandwich was tasty.  I squeezed fresh lemon over the roll to give my sweet strips some tartness.  The strips – contrary to popular belief from anyone who prefers clam bellies – were tender and meaty.  The fries were good. 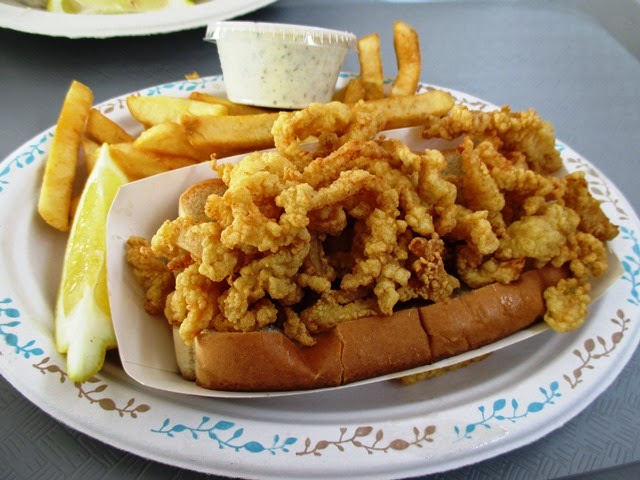 Mom’s fish and chip plate was also on the small side – especially where the fish was concerned.  Although they were thick, the pieces seemed kind of tiny.  She did enjoy the taste of the fish, which was white and flaky inside of its thin, dry coating.  She liked the fries, but they were nothing to write home about. 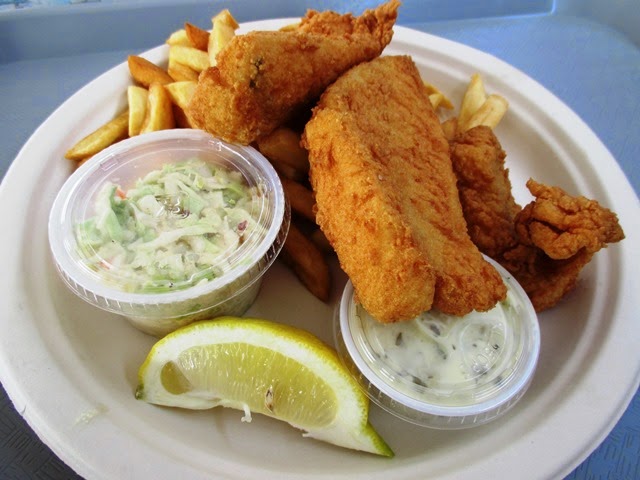 We finally decided to try one of the baseball-sized fritters.  I was the first to have one and unfortunately I was quickly disappointed.  The fritter was way too doughy – a result of the enormous size.  It tasted undercooked.  The coating was crisp, but the inside was almost flavorless and I really don’t remember seeing any clams.  It was just bread, bread and more bread.  Mom didn’t care for them either.  I think they need to shrink the fritters and perhaps cook them a bit longer.  There’s no use serving a show stopping appetizer if it’s not going to taste good. 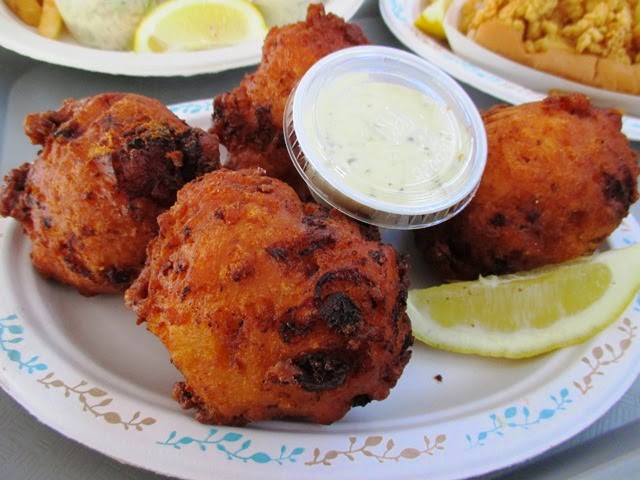 As we were eating outside and listening to a nearby radio, we heard a gentleman announce that the raw bar was open.  When we were leaving, was passed a little shack where there were fresh oysters displayed on ice.  People were already lining up, so I assume this is a very popular offering.  I would like to try an oyster one day, but I’m scared that I’m going to hate it!  Plus, I don’t want to pay for something I’m not going to like.  So if you see me in a restaurant and you’re eating oysters, please let me try one.  And while you’re at it, please show me how to eat the damn thing. 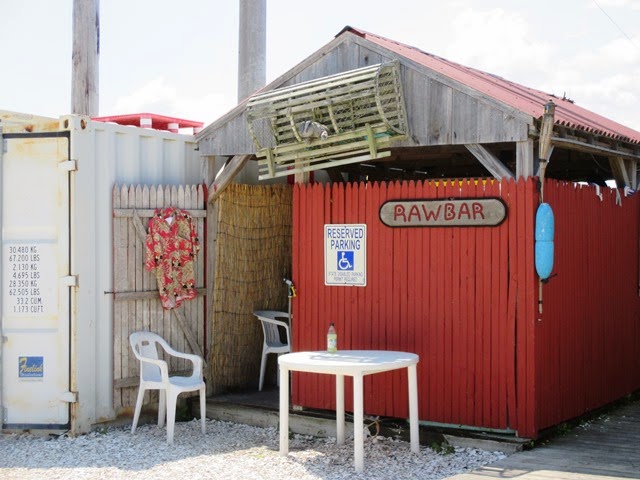 Will we be back to Eastwind?  I don’t want to say no, but I will say that we won’t rush there.  I think you can get more for your money elsewhere, even though the food wasn’t bad.  It was just “ok” in our book, but you should definitely try it out for yourself.  Make sure to get the chowder!