Mom and I have been dining at Gennaro’s Eatery for many years, and each time we visit we spend the rest of the ride back to Fall River talking about how delicious our meals were. 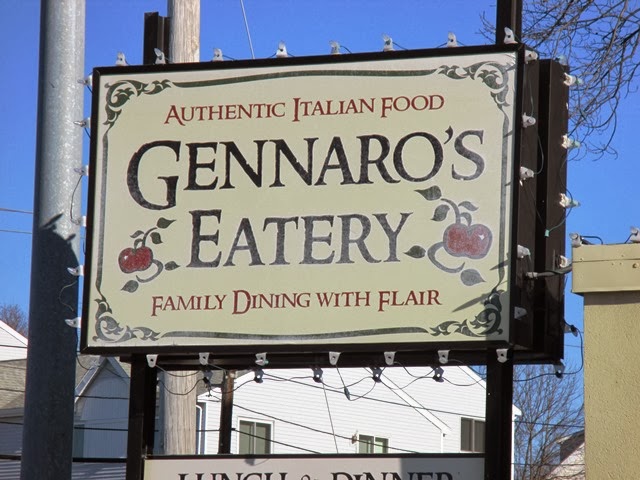 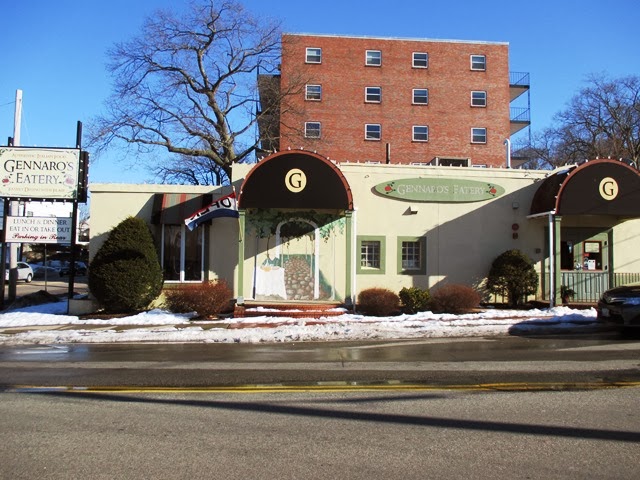 Gennaro’s Eatery is what every casual Italian restaurant should be.  When you first step foot into the restaurant you are smacked in the face with the smell of fresh bread.  Once inside, your eyes light up when you take a peek at their display case filled with large cakes that look like they should be on the cover of a magazine. 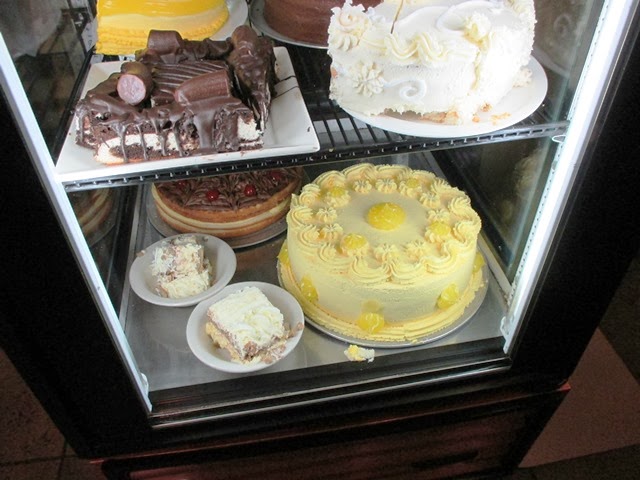 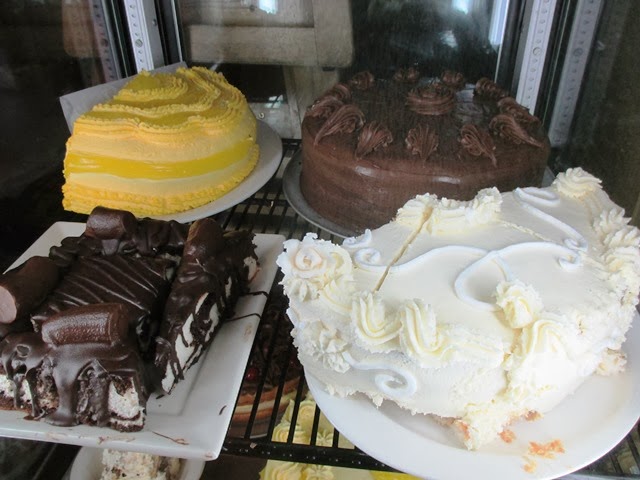 One of the best things about Gennaro’s Eatery is Gerry – the rotund chef/owner who is always there to greet you.  You’ll often see him at the kitchen window taking catering orders and handing out large bags of food to go.  With the restaurant named after his father, you can tell that Gerry takes pride in everything that leaves his kitchen.

Mom and I were quickly seated in the dining room and given menus to peruse.  I already knew what I was getting, but Mom was still deciding between a few Italian dishes.  When our waitress – Kelly – came over with a basket of fresh bread, Mom and I were ready to order.  Mom chose the chicken parmigiana with angel hair pasta ($10.99) and I decided to create my own small calzone ($8.99).  It comes with your choice of four fillings (each additional filling is $1.50) so I went with pepperoni, black olives, spinach and feta cheese.  We also ordered two fountain drinks (Diet Pepsi) at $2.49 each. 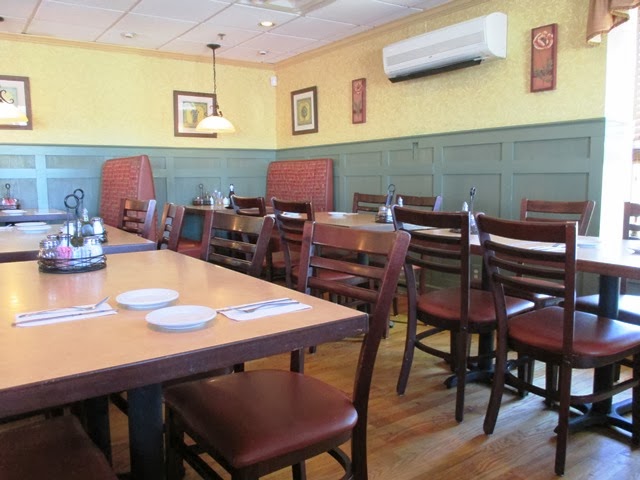 Now I have gotten the calzone before, so I knew what I was in for.  I knew that a football-sized meal was about to be presented to me on a pizza pan, but I didn’t care.  I was starving and ready to eat.

Gennaro’s is always busy, but we got lucky in that there was one large party and only a few scattered diners when we arrived.  I say this because the parking situation is tight, but a space is definitely worth waiting for.  The décor is clean and simple and the dining room includes a mixture of table and booths.

Everything is cooked to order at Gennaro’s, but the food still arrives at an appropriate time.  Kelly brought over both plates (pan, in my case) and everything looked perfect.  Later on, we found out that Mom’s chicken parm was actually the lunch portion.  We can’t even imagine how big the dinner plate is!  Mom’s chicken was all white meat and very tender.  The sauce was a blend of crushed tomatoes and the angel hair pasta was cooked perfectly.  She loved the taste and would recommend this dish. 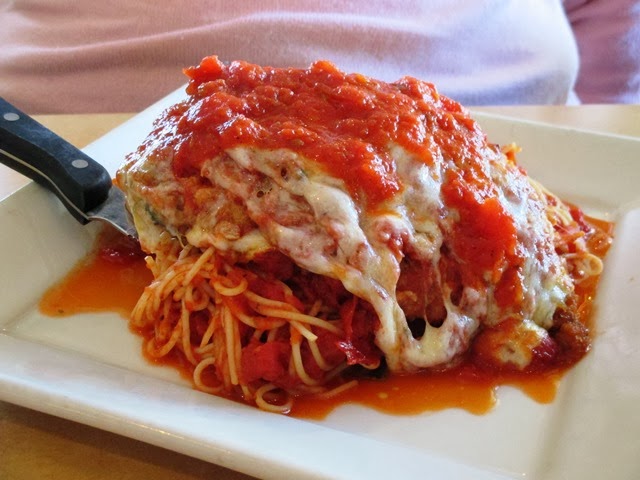 My meal also came with a side of the tasty crushed tomato sauce for dipping, and the calzone was absolutely stuffed with my chosen fillings.  Sometimes with calzones there can be more bread than filling, but not in this case.  There was some extra dough at the ends but it was about 96 percent loaded with pepperonis, olives, feta and spinach surrounded by a layer of cheese.  The bread was soft, the flavors came together perfectly and I ate this thing like I was in a contest. 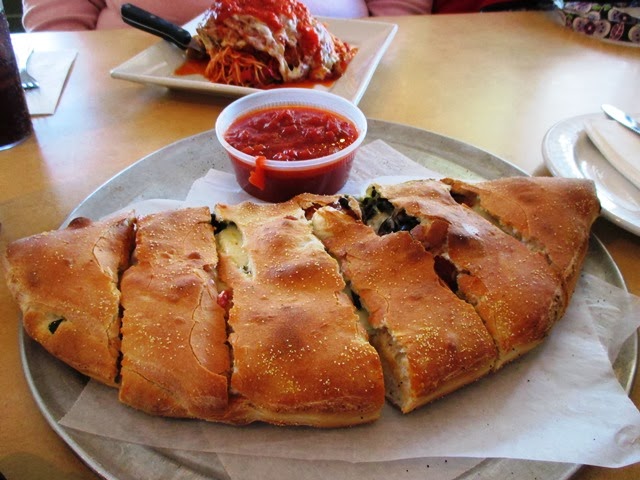 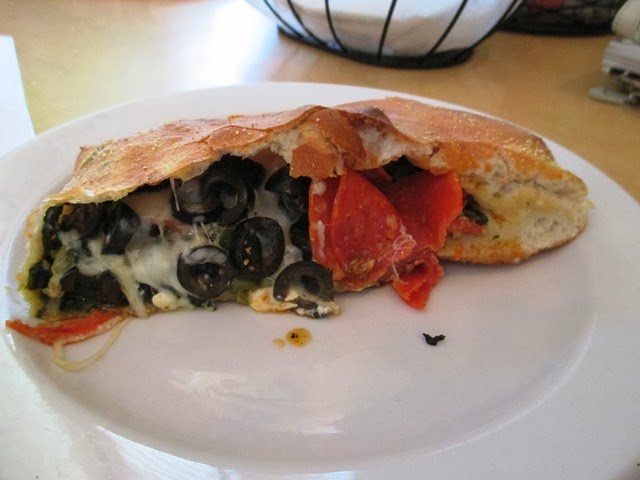 Of course, we couldn’t leave Gennaro’s without having a slice of their famous tiramisu.  As full as we were, we decided to pass on sharing one piece and ended up with two large bowls filled with creamy tiramisu ($4.50 each).  The temperature in the refrigerator may have been turned up too high because the middle of the tiramisu had a tiny crunch to it, but I actually like this so I had no problem with it.  The tiramisu was thick, soaked with espresso, drizzled with chocolate sauce and topped with real whipped cream.  It was heavenly. 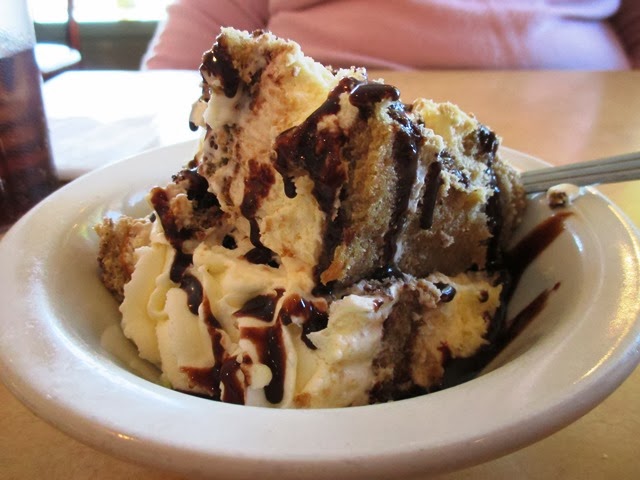 Do you remember that viral video of the snake that split in half because it was trying to devour a baby hippo?  I literally felt like both the snake and the hippo.  That’s how full I was.

We can’t get enough of Gennaro’s Eatery.  Mom and I have had many different meals here and we’ve loved everything we’ve ever been served.  The food is fresh, the staff is friendly, the restaurant and restrooms are clean and Gerry is a heartthrob.  You can’t go wrong!  Click here to read the menu.

Today’s total came to $36.34 – a steal for all of the food we had.  As we shuffled back to the car, we were talking about how much we love Gennaro’s Eatery.  It is truly one of our top five restaurant discoveries since starting New England Bites in 2007.  Simply stated – we love it!