Here at New England Bites, we like our fans to read the entire review before revealing our opinion on whether or not we enjoyed ourselves.  Well brace yourselves, because I’m about to drop a spoiler: 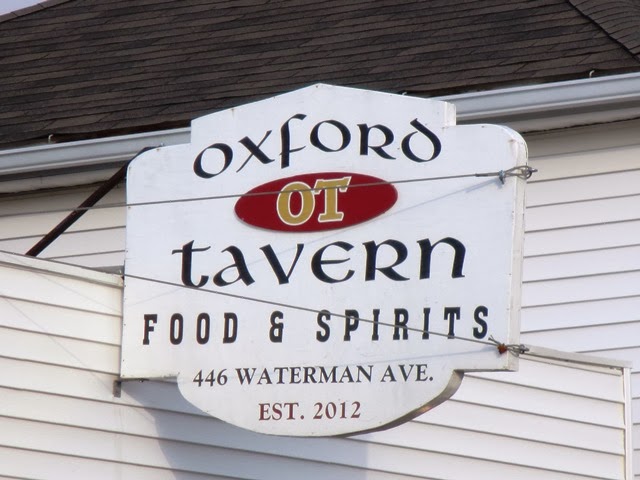 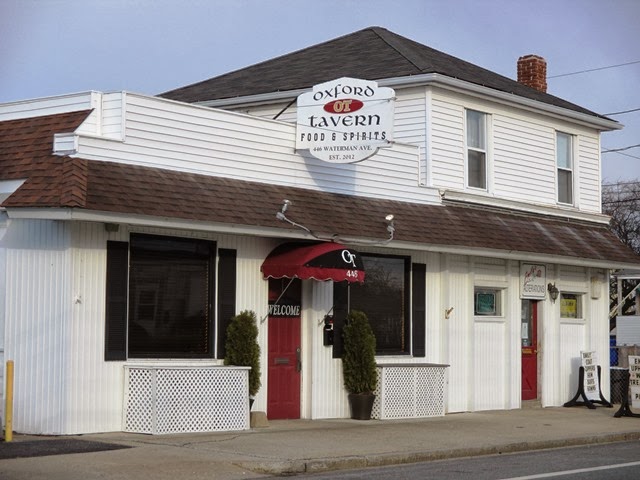 We’re no stranger to East Providence, but Mom and I had never been to Oxford Tavern before.  The restaurant is very unassuming from the outside.  It looks like a typical tavern complete with an adjacent parking area.  Once inside, you’ll find that it’s more than your average neighborhood bar. 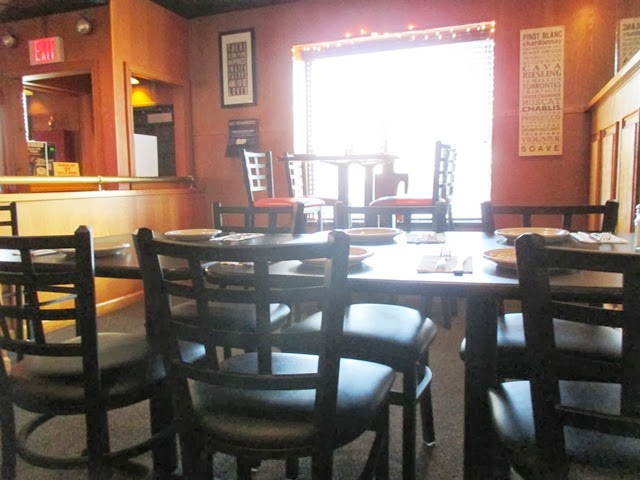 We arrived just as the restaurant opened, so we were the evening’s first customers.  The chef/owner was there to greet us and make small talk as he and the staff put the finishing touches on the décor.  Mom and I sat in the raised dining room located just across from the bar and diagonally from the open kitchen where diners can watch the chef prepare the food. 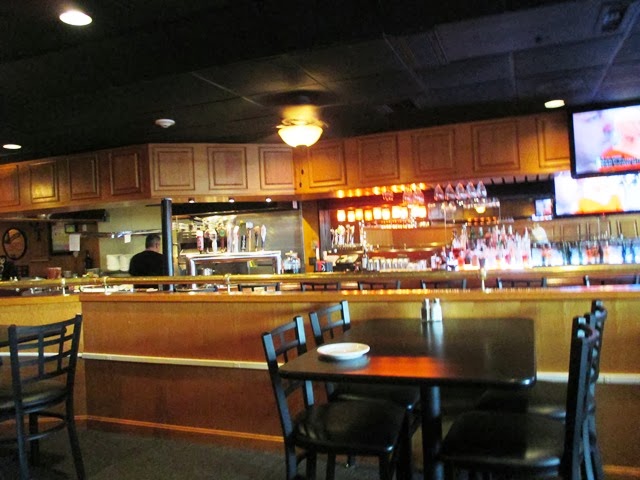 Our waitress came over to take our drink order.  I was dying to try the house made sangria ($8) and Mom wanted something “fun,” so the waitress suggested a glass of RumChata ($9).  We both love RumChata and Mom was very pleased with her drink, which arrived in a martini glass.  My sangria, which I noticed the bartender had ladled from a large glass jug on the bar, was fantastic.  It had a deep, rich flavor and the fruit was very fragrant. 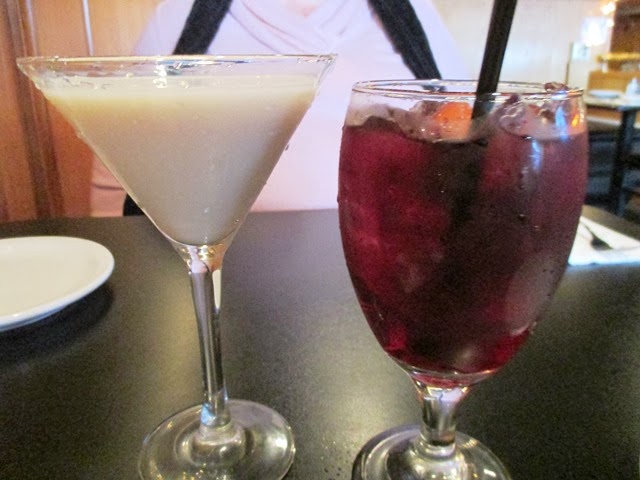 We were also given a glass of fried spaghetti – an Oxford Tavern hit.  These long, crunchy noodles had been fried and seasoned with hot Cajun spices.  The snack was presented in such a way that if you didn’t know what you were looking at, you would think it was a table decoration.  The spaghetti was addictive and very tasty.  We munched on these throughout our entire feast. 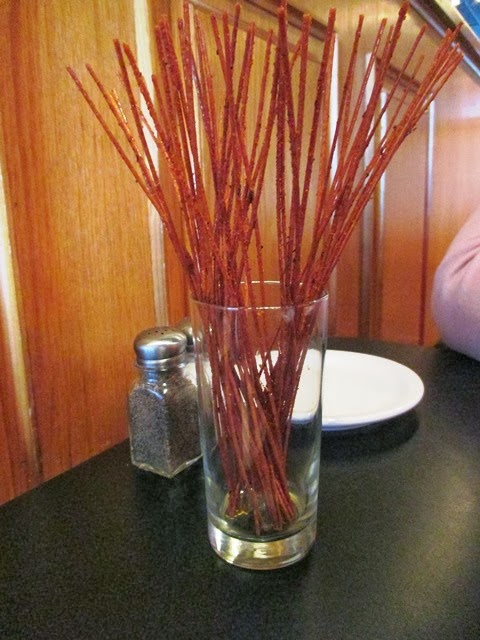 For our entrees, Mom decided on the Bolognese ($14) with her choice of pasta of the day.  She chose Campanelle.  I decided to choose from the specials menu and went with the butternut ravioli ($12).  The ravioli was listed as an appetizer, but I was assured that I could order it as my main meal.

While we were waiting for our dinner, we were given a plate of sliced bread with oil for dipping.  We had just started on the bread when we noticed that two steaming plates were headed for our table.

Now I have had butternut ravioli at many other restaurants, but this was hands down the best version of this dish that I’ve ever had.  The ravioli was topped with crumbled gorgonzola cheese and smothered with a thick maple walnut cream sauce with real walnuts scattered throughout.  The sauce had a rich maple flavor and the saltiness of the gorgonzola cheese kept the overall sweetness at bay.  It was a perfect combination.  The walnuts were thick and crunchy and the ravioli was filled, but not overstuffed, with fresh squash.  I used the remaining slices of bread to soak up the sauce because I didn’t want to leave a single drop behind. 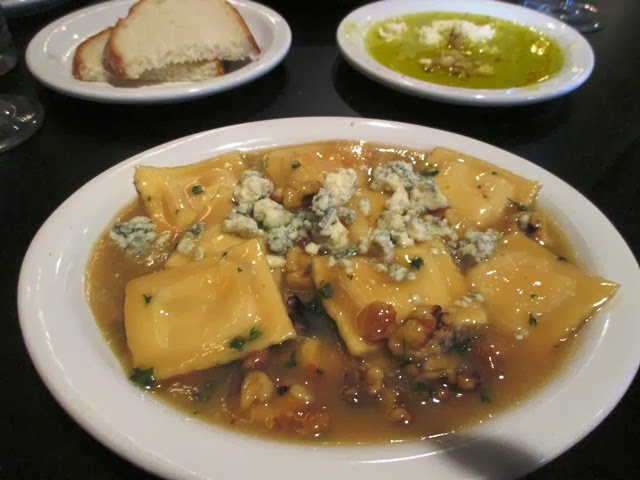 Mom’s dish was more than she expected.  Like me and the butternut ravioli, Mom has ordered pasta Bolognese just about everywhere, but this particular interpretation knocked her socks off.  The meat – a mixture of veal, pork, beef and sausage – was tender and flavorful.  The generous amount of pasta was cooked perfectly and the sauce was savory and had a pinkish hue to it that was probably due to a mixture of cream rather than straight tomato sauce.  Mom eats a lot of pasta and at this point in her life she can recognize a standout plate.  She raved about her meal all the way home. 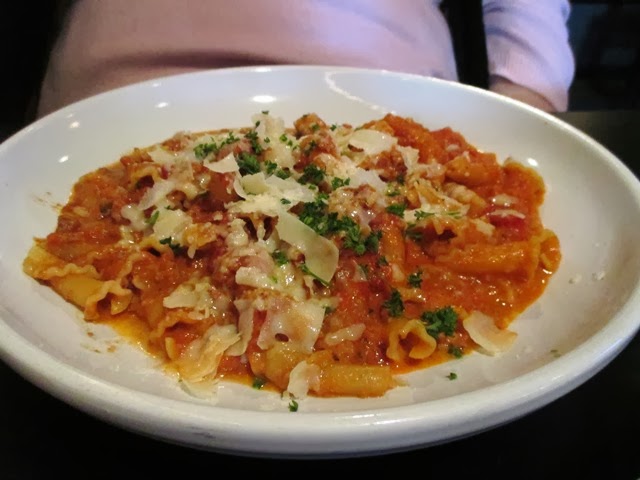 There wasn’t a morsel of food left in front of either of us.  The total for today’s dinner came to $45.08 – money well spent for quality.  This was home cooking at its best.  Click here to view the menu and learn more about Oxford Tavern’s regular meals and daily specials.

Oxford Tavern has become one of our new favorite places.  The restaurant was clean and the dark color scheme was warm and relaxing.  You’ll feel comfortable dining here after a long day at work or treating some friends to an amazing meal before a night on the town.  The Oxford Tavern has big city cuisine in an unexpected place.  It is truly a hidden gem that you can’t miss.