Twin Oaks is a Rhode Island institution.  Hidden within a residential area, the restaurant started as a speakeasy in the 1930s.  It is the state’s largest independently owned business.  Of course, in typical New England Bites fashion, Mom and I had never been. 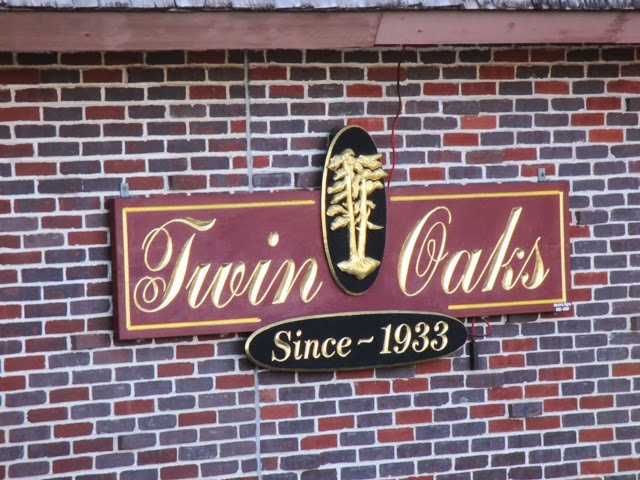 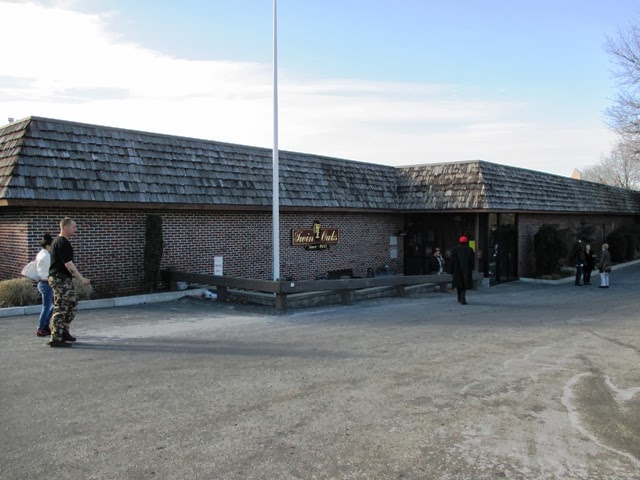 According to the online reviews, several people have complained that the decades-old restaurant has gone “downhill.”  Since this was our first time visiting Twin Oaks, Mom and I had nothing to compare it to.  We just hoped that our visit would be like the many four- and five-star ratings that Twin Oaks has received.

We pulled into the large parking lot and found that the place was already packed.  There were people going in, people coming out, cars pulling into spaces, valets walking to and from their office, etc.  To put it mildly, it was busy.  However, once inside, Mom and I were seated at a table by the window overlooking Spectacle Pond right away. 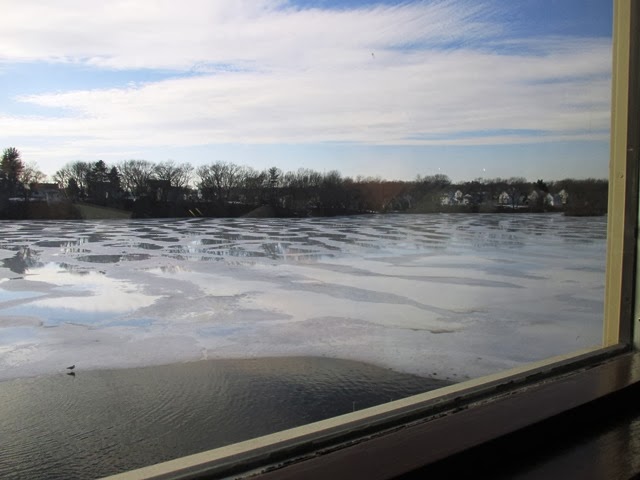 We fell in love with the ambiance.  The décor is very old fashioned, but in a good way.  Twin Oaks is a very large establishment with six separate dining rooms.  There is also a small gift shop at the front, and when a restaurant has its own gift shop, you know it’s a big deal.  Twin Oaks is the kind of place that you can bring a date, bring your grandmother, have a baby shower or even a wedding reception.  It’s definitely a go-to place for functions. 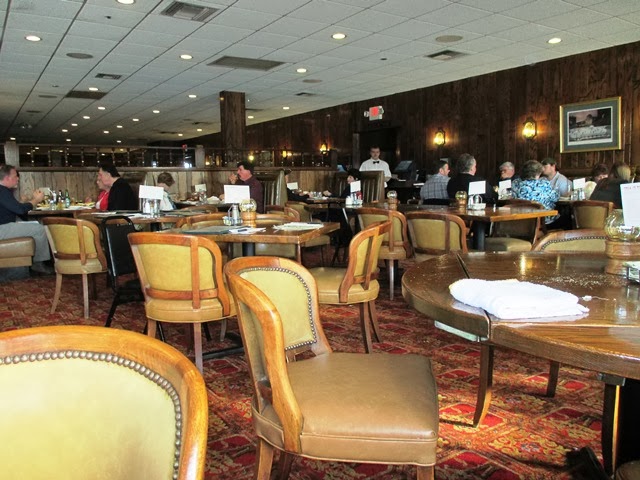 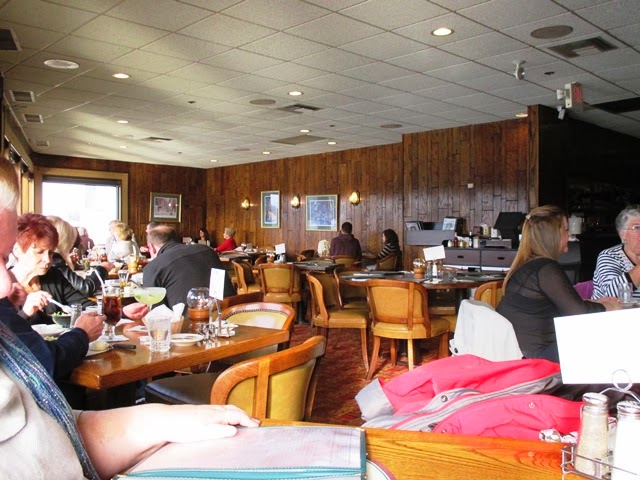 Our waiter (Richard) came to the table to take our drink order and bring glasses of water.  We ordered two Diet Cokes ($1.95 each) which came with the straws stuck to the condensation on the outside of the glasses – very cute.  Speaking of waiters, that’s all we saw.  Male waiters. The only female I saw working at Twin Oaks was behind the counter in the gift shop.  The men were all dressed impeccably in white dress shirts and black ties. 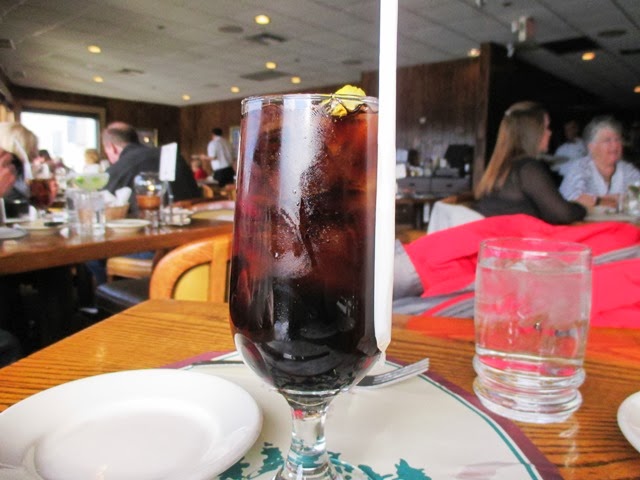 Mom and I perused the menu but we already knew what we were going to get thanks to their website (click here to view the menu).  I ordered the baked native sea scallops ($16.95) and Mom chose the roast turkey dinner ($13.50).  We also decided to get the full loaf of warm Italian bread with butter and cheese ($4.50) for an appetizer.

The bread loaf was huge!  Mom and I had actually debated on getting the half loaf, but decided on the full.  Next time we’ll definitely get the half.  Surrounded by a thin layer of butter, this hot Italian bread was topped with parmesan cheese and had a crunchy exterior while the middle stayed soft.  It was the perfect start to our meal. 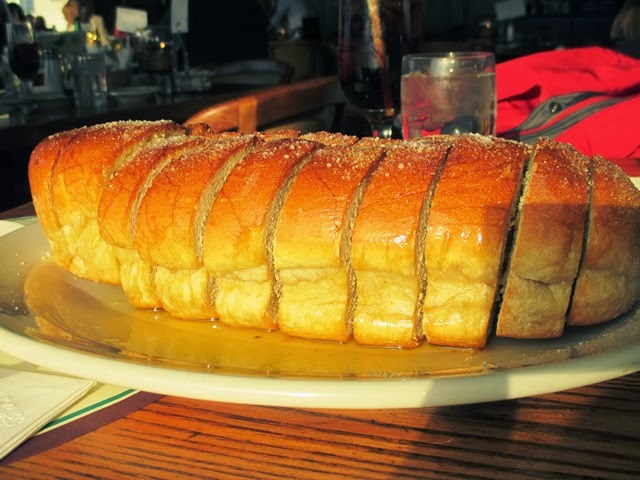 With all of the customers at Twin Oaks, we weren’t sure if there was going to be a wait to get our food.  There wasn’t.  Our food arrived steaming and was presented beautifully.  Mom’s roast turkey plate was humongous.  There must have been a pound of white meat turkey on her plate with another pound of stuffing underneath.  The turkey was topped with thick gravy and accompanied by a cup of cranberry sauce and her choice of mashed potatoes and cole slaw.  Mom felt like she was having Thanksgiving dinner.  You could tell that the large, thin turkey slices had been cut right off the bird, and Mom liked the bread stuffing and said that it was nicely spiced.  She also enjoyed her side of real mashed potatoes, and appreciated that they weren’t of the instant variety.  She thought it was an excellent meal. 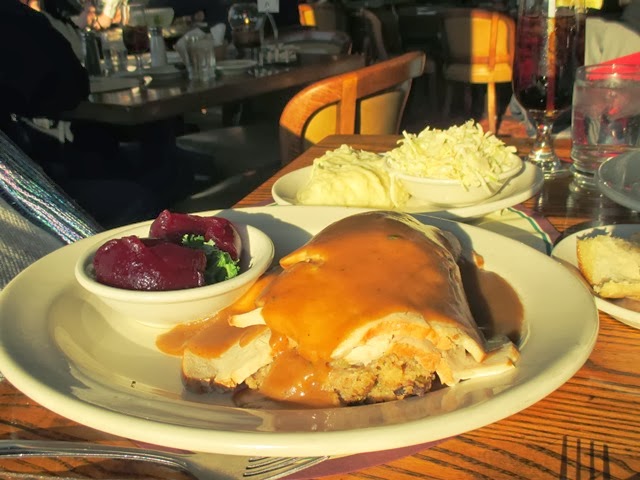 My sea scallops were fantastic.  I’ve had bay scallops before which are much smaller, but the sea scallops had to be cut with a fork due to their size.  Topped with a sauce made of butter, white wine, mozzarella cheese, bacon and cracker crumbs (although I did not taste the bacon – maybe they forgot), the scallops were very tasty and tender.  I chose fries and cole slaw as my sides and both items were great.  I kept dipping the bread and the fries in the sauce after I’d eaten all the scallops because it was too flavorful to waste. 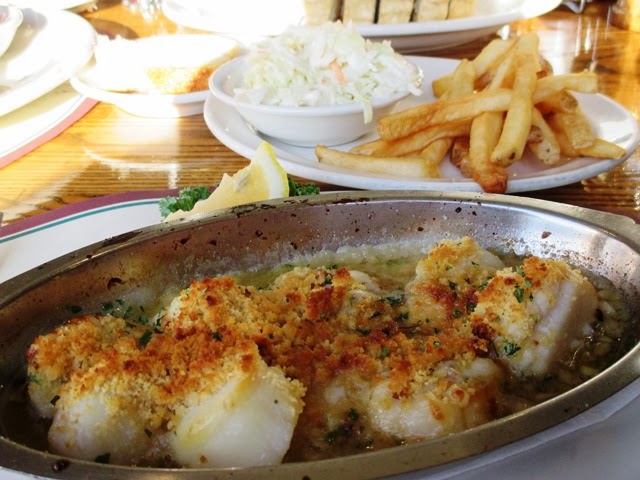 As if we weren’t full enough, Mom and I decided on dessert.  She chose a cup of Grapenut pudding ($3.95) while I went with the Galliano parfait ($4.50).  Mom said the cool Grapenut pudding was one of the best she’s ever had.  It was thick and smooth – more like custard – and was heavenly.

My Galliano parfait was made with Galliano liquor over vanilla ice cream and topped with real whipped cream.  The waiter made sure that I was old enough before serving me this dish.  The sun must have been in his eyes, because there’s no way I look 21 anymore.  However, I appreciated the compliment.  Thank goodness for the vanilla ice cream in the parfait because the Galliano liquor was intense!  I liked the punch of alcohol with every bite of tasty ice cream.  It was a cool, creamy way to end a delicious meal. 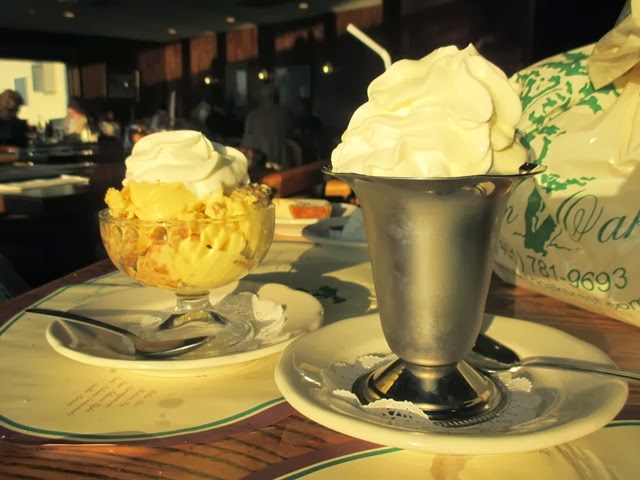 If Twin Oaks has gone downhill, it’s hard to tell.  We had wonderful time and are looking forward to going back.  The restaurant (and restroom) was clean, the staff was fast and friendly and our meals were top notch.  Our total for today came to $51.10 – a bargain for all the food we had.

We highly suggest visiting Twin Oaks Restaurant, but you may want to make a reservation first – especially at night.  When Mom and I were leaving there were even more people coming in than before.  There were also people waiting in the lobby, so although I’m sure you could get a table at this immense eatery, you may want to call ahead just in case.  No one should have to wait for such an enjoyable experience.