After walking out of a restaurant due to the odd smell, lack of menu items and disgusting cola, Mom and I decided to head to Mattapoisett Chowder House for lunch.  The restaurant had recently closed for a day or so due to financial issues, but we were thrilled when we read about its reopening.  Especially on a day where all we wanted was a tasty seafood meal in a place that didn’t stink. 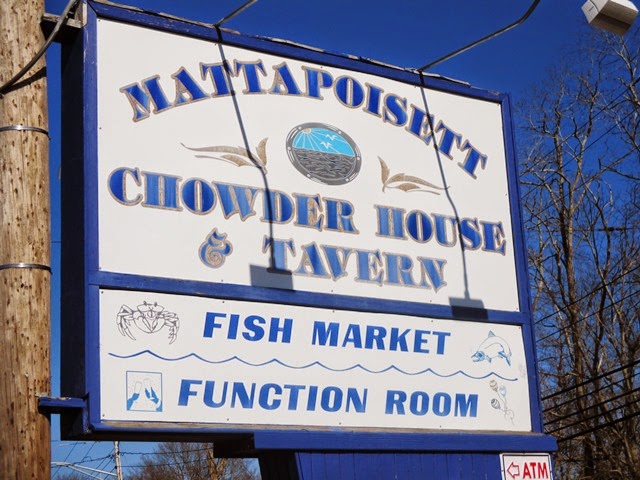 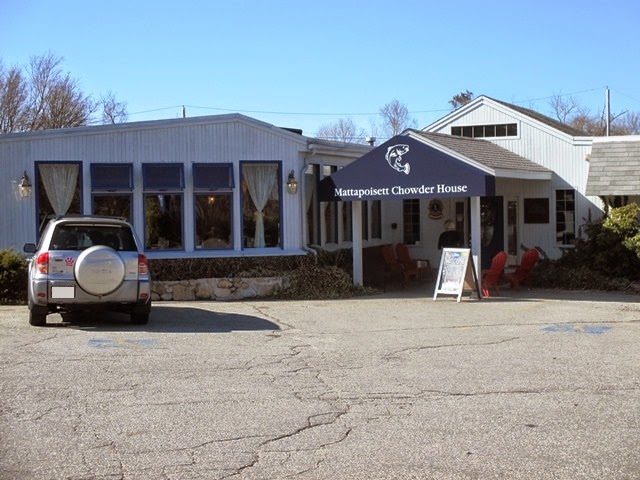 When we entered the restaurant we were at the fresh fish counter where beautiful fillets and various shellfish were displayed, along with a tank of live lobsters.  We had been to the chowder house a few times before and everything had been fabulous, so we were excited to get down to business. 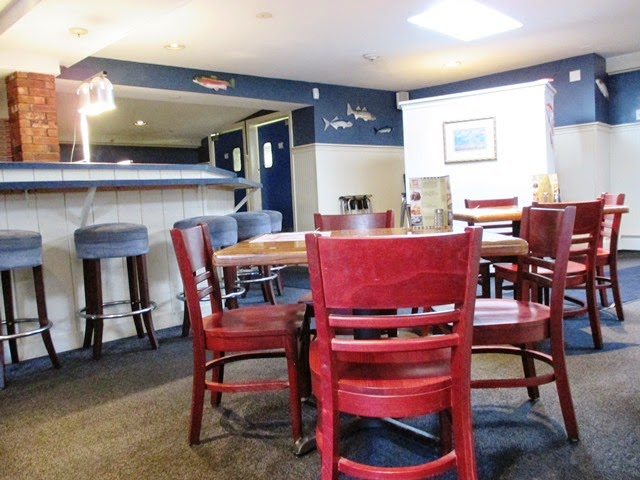 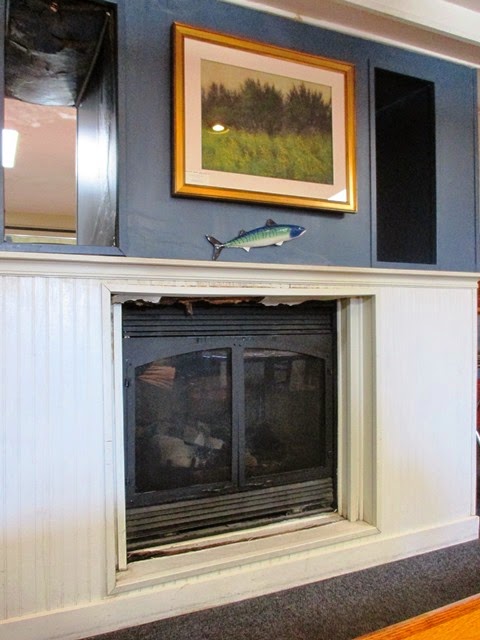 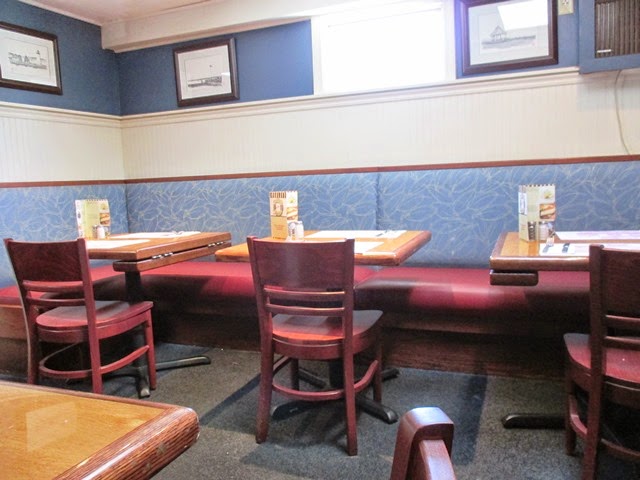 We were seated at a small booth in the main dining area but chose to relocate to a table in the back by the fireplace.  Our waitress (Tesse) had brought over the two ice waters with lemon that we requested (we were off soda thanks to the other restaurant) along with two pieces of warm cornbread.  The cornbread was very dry, but that’s cornbread for you.  Sometimes it’s dry, sometimes it’s not. 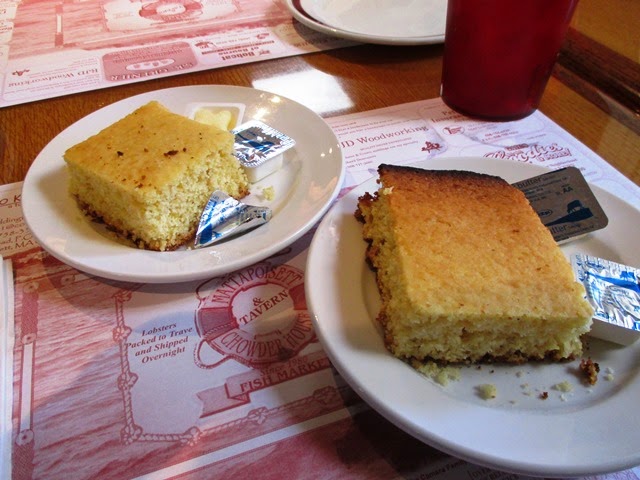 For our meals, Mom decided on the medium size order of New England style fish and chips ($11.99) and we chose a half dozen clam cakes to start ($4.50).  Now for my main meal, I decided to be brave and order a clam roll ($12.99).  Now I’ve never – EVER – had a clam belly before.  The thought of it used to make me sick.  To be honest, I just started eating clam strips a few years ago.  I always had a vision of a chewy piece of belly in my mouth and it always made me want to puke.  However, my aunt Pauline raves about the bellies and has always described them as “tender.”  I decided to give it a shot.

Our clam cakes came out first and they were fantastic.  The breading was lightly crisp and buttery and the dough was soft without being too chewy.  There were plenty of clams throughout, but it was not overstuffed (which we like).  The appetizer came with tartar sauce but I like to dip my clam cakes in white vinegar, so Tesse brought some over.  It was a great starter. 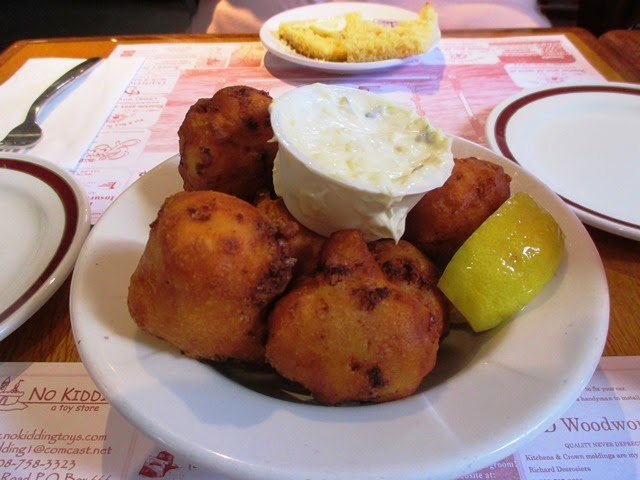 When our plates arrived, they looked amazing.  I was anticipating my clam roll and so was Mom.  She wasn’t sure if I was going to take one bite and hate everything.  This was not the case.  I really enjoyed the bellies and – like my aunt said – they were actually tender!  The clam strips are much chewier than the melt-in-your-mouth bellies, but for me personally, I am not a huge fan of the “fishy” taste of clams.  My bulkie roll was slightly toasted and the fries that came with it were thick with potato. The cole slaw – which I’ve always enjoyed here – was crunchy and had a peppery vinaigrette dressing rather than mayonnaise. Delish. 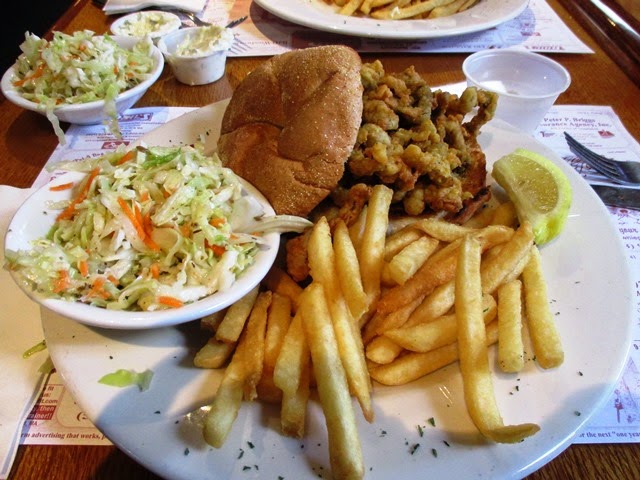 Mom’s “medium” fish and chip plate came with two large pieces of fish served over a bed of fries and accompanied by a cup of cole slaw. Her New England style batter was light rather than the heavy English style. The fish inside was white and flaky and she enjoyed the fries as well.  She had wanted fish and chips all week and was pleased to finally get her fix at a proper seafood restaurant. 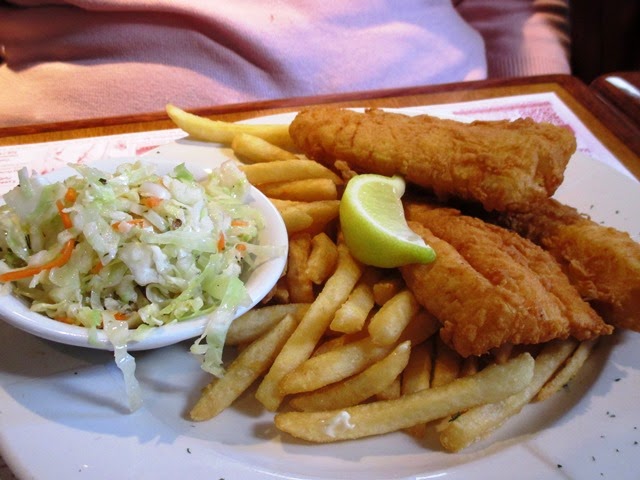 Tesse came over to see if we wanted dessert, but we were both stuffed.  Our total came to $31.32 which was a great price for all the food that was served.  The restroom – like the restaurant itself – was very clean. Click here to view Mattapoisett Chowder House’s large menu of seafood and other items.

Would I try whole clams again?  Yes, but because I don’t love the taste of clams, I’m going to stick with strips.  I love clam chowder and clam cakes, but that’s because the clam taste isn’t overwhelming in either dish.  It’s the same with lobster.  I’m not a fan, but I wouldn’t mind trying things with lobster added in.  That’s just my personal taste, but I would only take a chance on trying new seafood at a place like Mattapoisett Chowder House where they know what they’re doing.  We’ll definitely be back!