We at New England Bites love Yelp.com.  We love reading the good – and bad – reviews of local restaurants.  Often times we agree on the rating, but we were shocked when we read the rating for one of my favorite restaurants – Sam Diego’s of Hyannis. 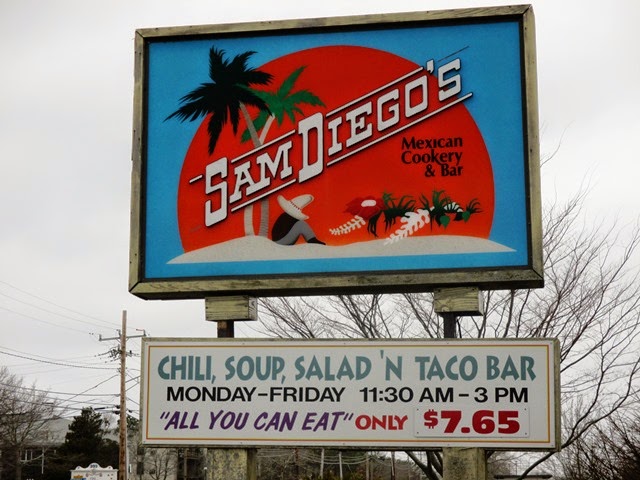 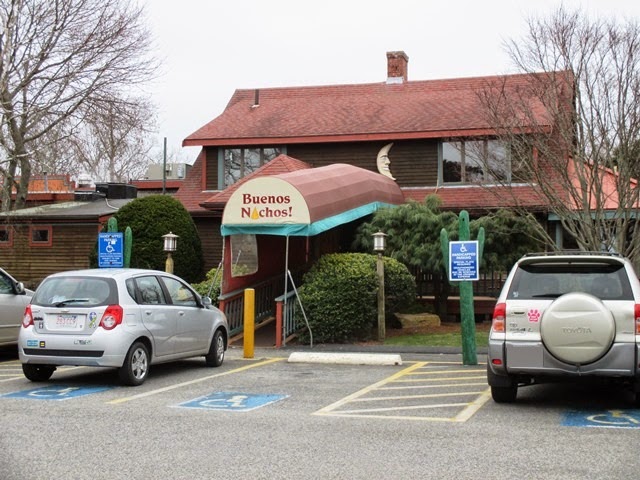 Rated only three stars out of a possible five, this restaurant has been reviewed by 98 people.  Even worse was their Plymouth location, rated two and a half stars by 70 people.  What surprised me the most is that Mom and I have always had a great time at Sam’s.  We love the food and the atmosphere, the service is always awesome and the prices are reasonable.

So how does our opinion differ from so many Yelpers?  Read on …

I can’t disagree with the watery salsa.  Since Mom doesn’t care for salsa, I’m the only one who eats it.  I would say that it is on the weak side and very watered down.  However, it hasn’t changed since we started dining at Sam’s, so either they are using the same store-bought brand or that’s just how they make their salsa.  Mom thinks that the chips are not made in-house due to their uniform shape.  However, we both enjoy the fact that Sam’s warms up the chips before serving them.

YELP:  Non-authentic Mexican cuisine.
NEBS:  Agreed, but that’s not why people go to Sam Diego’s. (But maybe they should.)

If you’re looking for hardcore Mexican cuisine, you should do your research.  Sam Diego’s serves an Americanized version of several Mexican favorites in a kitschy, fun restaurant with plenty to look at.  The food has always been good – much better than those who compared it to Taco Bell – and that is what has kept us coming back for years.

The Hyannis location received a few comments about the less-than-stellar service at Sam Diego’s, but the Plymouth location received a lot.  When we’ve dined in Plymouth, we’ve never experienced the “pompous,” “arrogant” and “obnoxious” waitstaff that had served so many Yelpers.  Perhaps Mom and I are lucky, but the service in Hyannis – and Plymouth, for that matter – has always been excellent.

Sorry Sam’s.  We love you, but you need to clean the restrooms during the day.  Mom and I always use the restroom before leaving the restaurant as we have a long drive back to Fall River, and I can’t remember a time when the ladies room hasn’t looked like it was hit by a tornado.

As you can see, we did agree with what the Yelpers wrote (except for the service).  They also complained that the food is not spicy.  Mom and I have never really ordered food that was supposed to be super spicy, so we don’t really have an opinion on that.  Perhaps Sam Diego’s should introduce more authentic dishes to the menu to satisfy their customers, but the least they should do is keep the bathrooms as clean as the dining area. 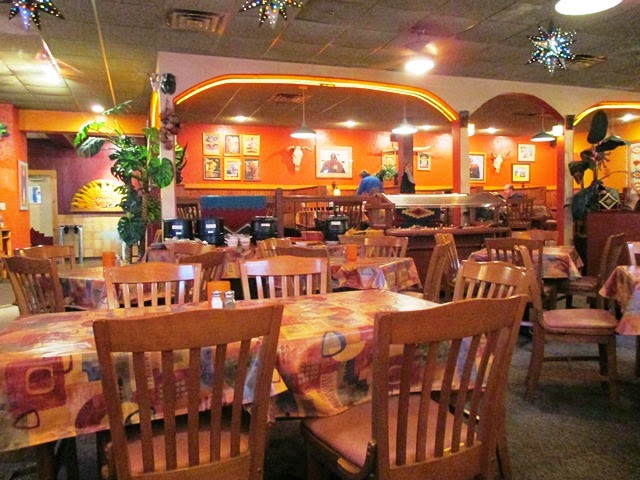 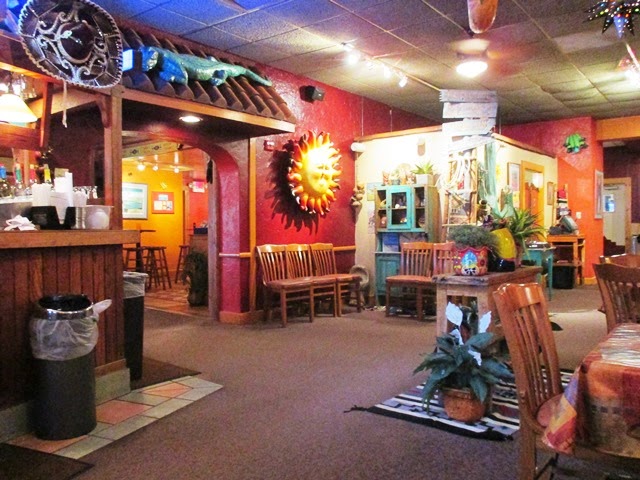 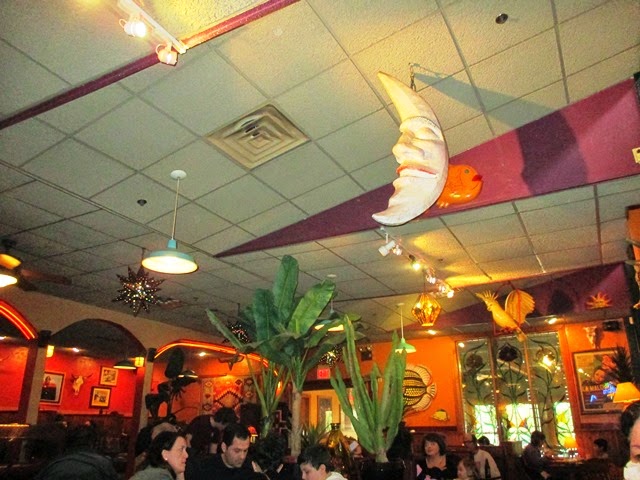 Despite all of these things, Mom and I decided to have lunch at Sam Diego’s in Hyannis while we were “on Cape.”  After nearly being killed trying to get into the parking lot, we quickly found a spot and were seated right away near the busy all-you-can-eat taco and chili bar.  Our waitress – whose name appeared as “Granny” on the bill – took our drink order.  We passed on the margaritas and decided to stick with Diet Pepsi ($2.65 each).

For an appetizer, we ordered our favorite thing – the Hollerin’ Jalapeno Pretzel ($4.75).  This warm jalapeno pretzel – served with a very tasty Dijon dipping sauce – is large, soft and has a gooey layer of pepper jack cheese throughout.  It was fantastic, as always. 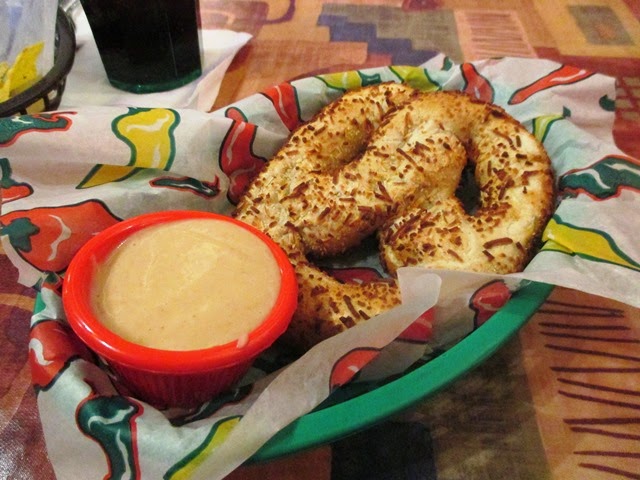 I should mention that we were served a complimentary order of chips and salsa before our meal.  See above for our feelings on this starter.  (I should note that it has never stopped us from eating the entire serving.) 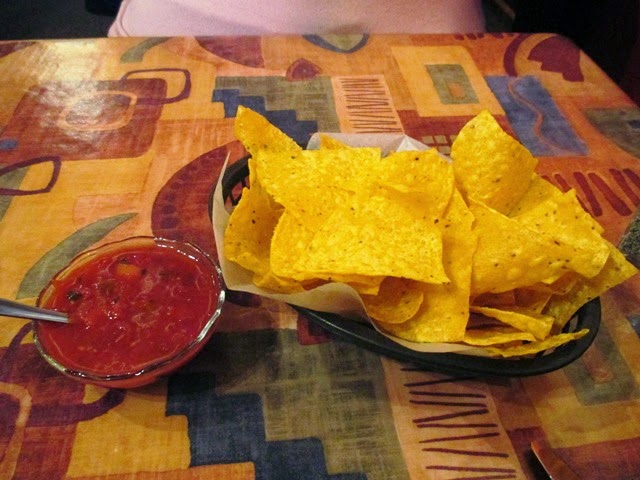 Mom and I decided to split two different things.  We ordered the BBQ Pork Quesadilla ($11.99) sans the diced tomatoes and cole slaw (Mom hates ‘em) and the Fajitas with flame-grilled chicken breast ($13.59). A male waiter brought over our dishes which were both very hot.  The tortillas came in a separate container with a lid to keep them warm.  Everything looked fresh and the quesadilla came out exactly as we asked.  We asked for two extra plates so that we could divide everything up and start eating.

The BBQ Pork Quesadilla was cut into four pieces and accompanied by a serving of shredded lettuce and sour cream (the sour cream had been forgotten but quickly retrieved by our waitress).  The pork – listed as “slow roasted” on the menu – was tender and juicy and tasted great with the cheese baked inside.  The lettuce was fresh and the sour cream was tangy and cool.  We loved it. 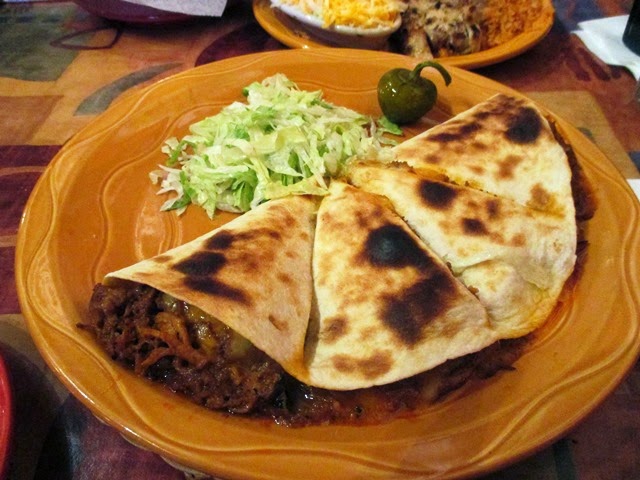 The chicken fajitas were great, although we didn’t taste the lime and cilantro marinade that our chicken was supposed to be seasoned with.  The chicken breast was cooked perfectly and was served over Spanish rice (we aren’t fans of rice) with a tray of black olives, pico de gallo, jack and cheddar cheeses, lettuce and sour cream on the side.  Mom and I happily sat at the table making our fajitas to taste and loving every minute of it. 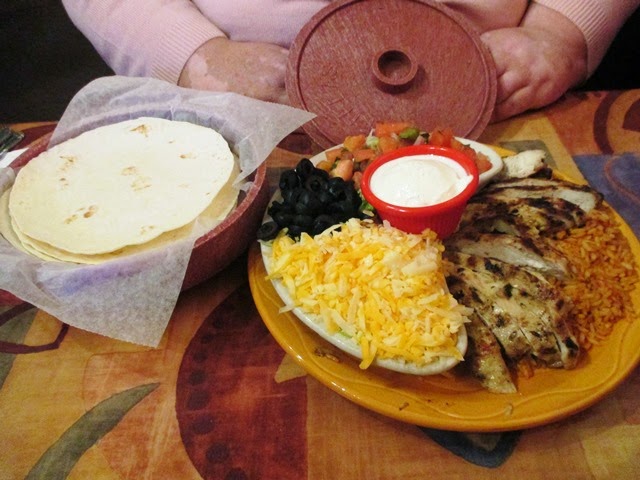 Our total came to $38.12 and we left the restaurant absolutely stuffed.  Sam Diego’s has always been one of my favorite restaurants (click here to view the menu), and this visit did not change my mind in any way.

Before leaving, we decided to stop and use the ladies room.  It was a mess, which is unfortunate but expected since this always seems to happen here.

To the owner(s) of Sam Diego’s, we are fans.  However, you may want to take our suggestions (and the suggestions of so many others) into consideration so that you can be back on top where you belong.

PS – It’s funny … I initially thought we were going to disagree with the Yelpers until I started writing this review.  Still, I gave it four stars on Yelp because that’s what we think Sam’s deserves based on our experiences.