In the latest edition of “Laura’s Lunch,” I decided to take myself to Cilantro Mexican Grill, which is located just down the street from my office.  The reason I was all hopped up on the thought of Mexican food was because on Wednesday people from my office were eating it.  Being the suggestive eater that I am, I decided that I absolutely needed to have Mexican food as soon as possible. 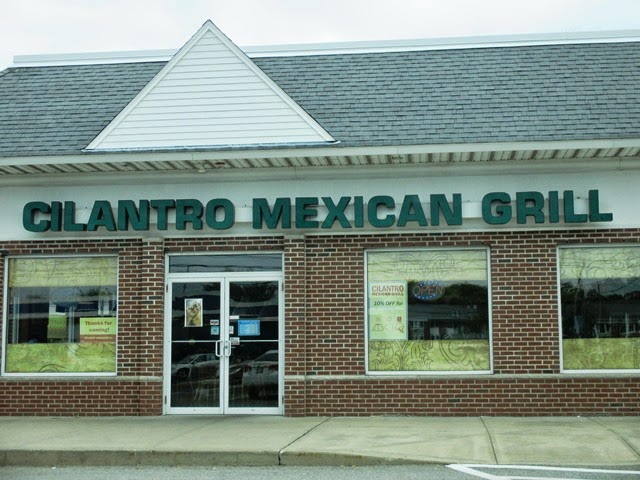 I called in my order mainly because I’m lazy and hate waiting for things.  (Click here to view the menu.)  I ordered a large quesadilla on a smoked pepper tortilla with barbecue chicken, sautéed onions and peppers, pico de gallo, cheese and sour cream ($7.55).  Since my order wasn’t nearing my personal $10 maximum to spend, I decided to throw in a small bag of chips and salsa ($1.50).  I was quoted a total of $8.62 and told that it would only take five minutes for my order to be ready. 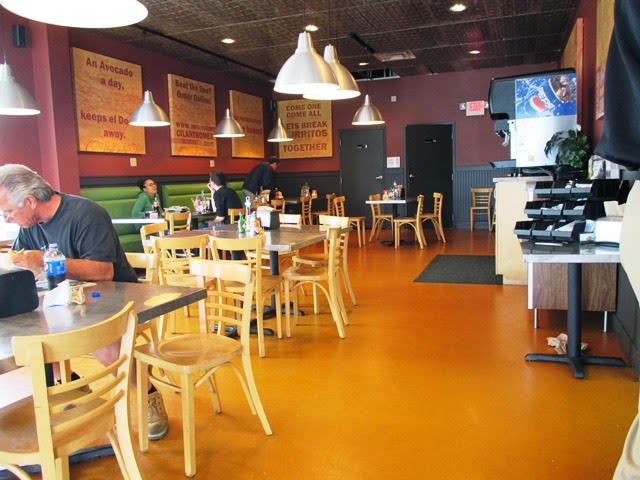 I headed down the street and pulled into a parking space.  Of course, since I never ever look down, I stepped right into a huge puddle.  Dragging my soaking wet foot inside, I saw that my quesadilla was being packed up.  “Perfect timing,” said the guy behind the register.  A girl began to cash me out and asked me if I wanted chips and salsa.  I told her yes (and wondered why she was asking since I had ordered it over the phone).  She then quoted me a total of $9.16.  I asked why and she told me that the phone dude never added in my chips and salsa.  These chips and cup of salsa were starting to be a pain in the butt, but I had no idea what was to come.  I cashed out and she asked me if I wanted a bag to put my chips and salsa in (the chips were in a small paper bag and the salsa in a small plastic cup).  I said no because I had every intention of balancing the chips and salsa on top of the quesadilla box all the way back to work.

Mind you, I have never balanced anything in my life.

I pulled into the office parking lot, carefully balancing the chips and salsa on top of the quesadilla box until I reached the employee entrance.  A man I’d never seen before let me in.  I thanked him and took a sharp left around the corner and that’s when it happened.

I dropped the salsa onto the rug in the hallway. 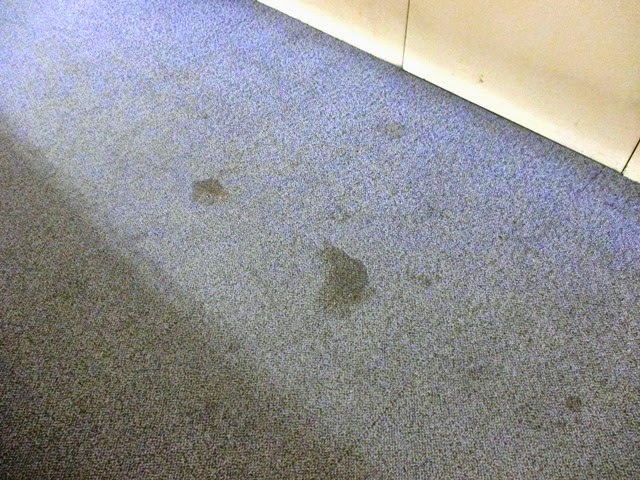 The cup of salsa overturned and made a SPLAT sound like someone dropped a watermelon off the top of a building.  It was absolutely disgusting.  What made matters worse is that it made the rug look like something out of a crime scene.  The unknown guy behind me just froze … and then started laughing.  Due to the way the salsa fell, the cover was still a bit underneath the container.  The laughing man did his best to slide the cover back under the salsa, flip the cup and then handed it back to me.  I ran to the break room to retrieve napkins, but he found them faster and scooped up the salsa for me.  What a gentleman!  As flattered as I was, I never wanted to see this person again since I was horribly embarrassed, but as it turns out he works in the same department I do.  He works the night shift so I never see him.  Awkward!  As he left the office he said, “Enjoy your lunch,” and then started laughing again.

Alright, back to business.  There were a few more inconveniences that took place (no utensils, I forgot to get a drink, I couldn’t find napkins, etc.), but on the whole the food was “meh.”  I really enjoy Mexican food and on this Friday-that-had-the-appeal-of-a-Monday, I wanted something awesome. 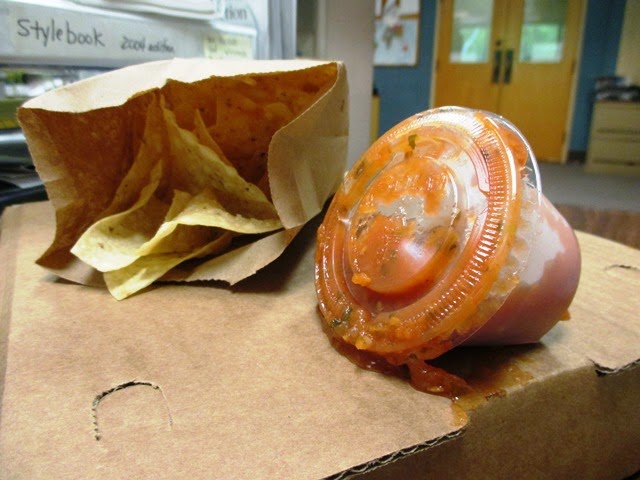 The chips actually had a weird taste to them.  I don’t know what it was, but my guess is that there was either too much salt or they were too greasy.  Either way, something was up.  As for the salsa – yes, the floor salsa which I actually consumed – it was just ok.  Perhaps it would have been better if it hadn’t been scooped off the carpet outside of the men’s room.  I got the “medium” version and I will say that it had a medium amount of heat. 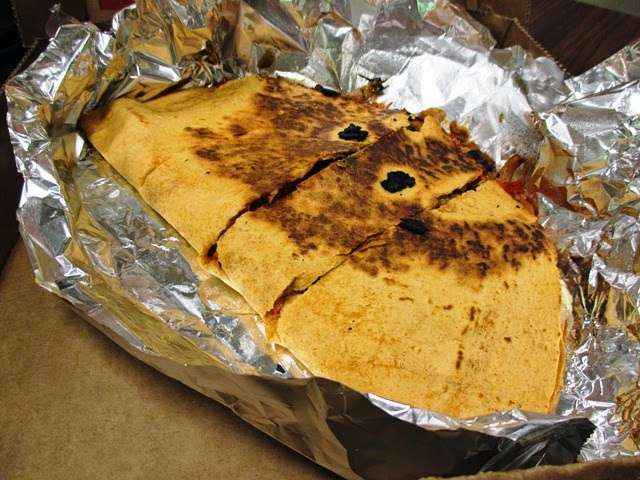 The quesadilla was a really good size, but I wasn’t wowed by the flavor.  The veggies inside made everything gloppy and for some reason the quesadilla was lava hot.  I know that it was freshly made, but the foil surrounding it definitely did its job of keeping in the heat.  Because of this, the sour cream melted and disappeared, leaving none of its awesome flavor behind.  The most flavorful ingredient was the barbecue chicken, which was cooked perfectly but the taste overpowered everything else.


Will I go back?  Yes.  I definitely want to give this place another shot.  My meal was good and for the amount of food I got, the price was appropriate.  It was my own clumsy fault for destroying the salsa, so I’ll try and be more careful on my next visit.