Wave your pinkies in the air like you just don’t care!

That’s what Mom and I did on Father’s Day after visiting Dad’s grave at the Massachusetts National Cemetery in Bourne.  We decided to forego the typical Cape Cod seafood lunch and treat ourselves to a gourmet tea service complete with freshly baked scones and cucumber sandwiches. 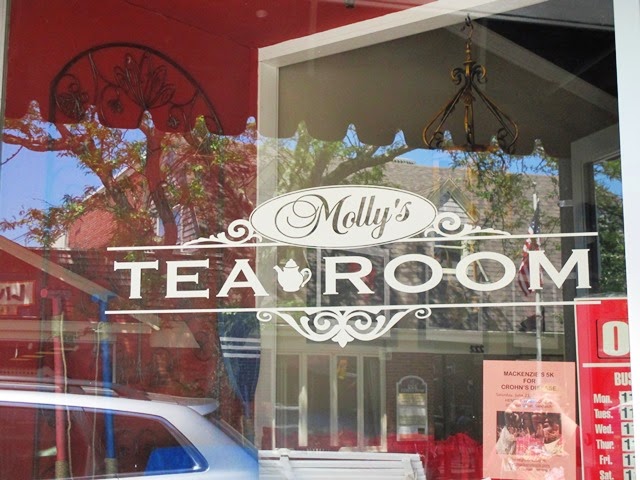 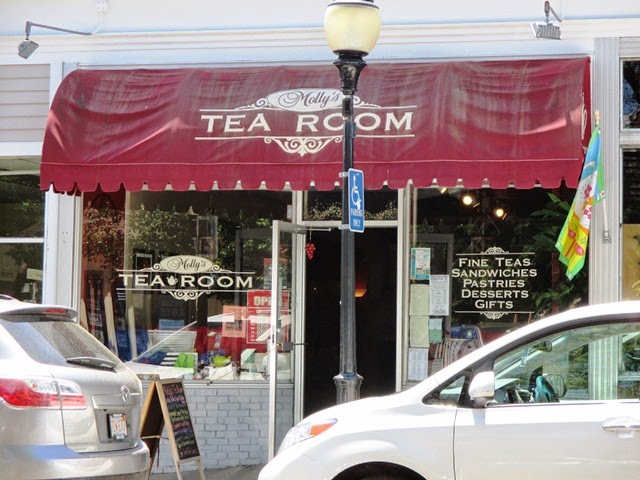 We had driven past Molly’s a handful of times in the past.  Located in adorable Falmouth center, Mom and I figured that Molly’s – a genuine tea room – would not be as crowded as some of the other restaurants on Father’s Day.  I don’t think I’ve ever heard anyone say that they took their dad out for high tea.  I’m sure all the men were lining up for lobsters and clamboils elsewhere.

I was lucky enough to score a parking space nearby (not easy to do) and once inside the tea room we were greeted by Jillian – an excellent server who was very helpful and knowledgeable throughout our entire visit.  Mom and I chose a table at the back of the restaurant and took a few minutes to explore the menu (click here to view). 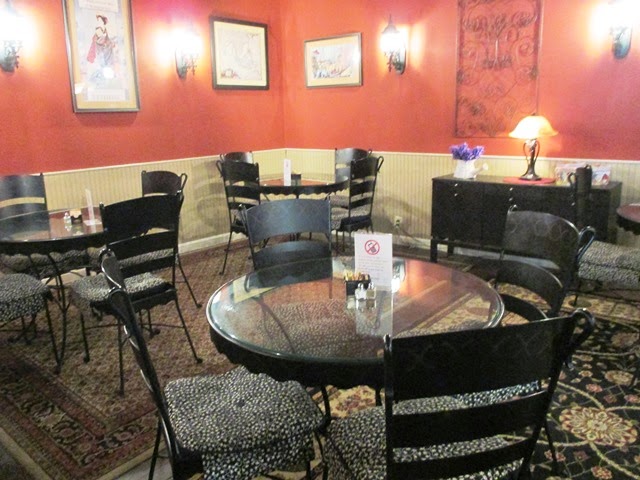 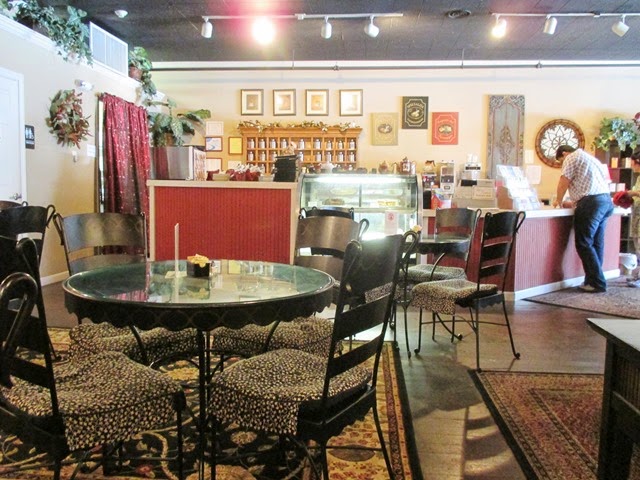 Always the sleuth, Mom had already researched something called the “Queen’s Luncheon” – a three-tiered tray loaded with mini sandwiches and desserts ($14.95).  It also came with a scone served with lemon curd and house made clotted cream.  For $2.75, you could add an additional scone.  Of course, this is exactly what we were going to get.  Since we were in a tea room, we also ordered – you guessed it – a pot of tea ($4.50 a pot). The tea we chose was called “Paris,” and it was described as “a rich blend of black teas, currant, caramel and citrus with a hint of lemony Bergamot (orange) and vanilla.”

When the tea came, the pot was in a blue and white tea cozy and Jillian brought over our teacups and saucers along with a little hour glass.  She flipped the glass and told us to wait until it finished emptying so that our teabag could steep for the appropriate amount of time.  When the sand was out of the top, Mom took the cover off the pot and pulled out the strainer and placed it into a tiny silver cup.  Very fancy stuff.  The aroma of the tea – you could really smell the vanilla, caramel and citrus – was heavenly.  I asked for milk and there was already sugar on the table, so we gussied up our teas and took a sip.  It was absolutely delicious.  We both loved it and apparently everyone else does since Jillian had to go in the back to make sure it was still available.  It has a very mild flavor but the taste was distinct. 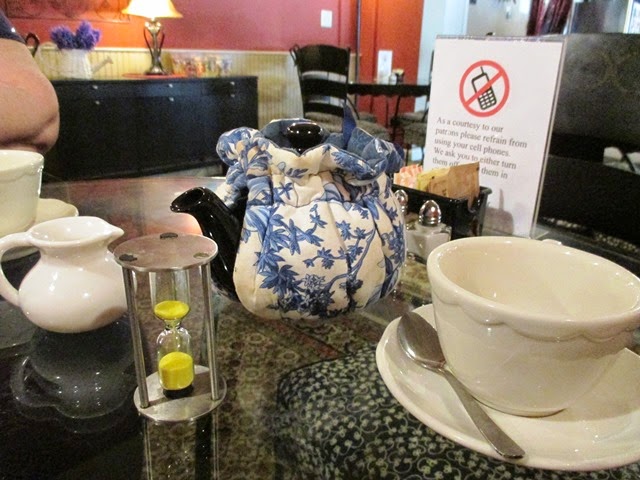 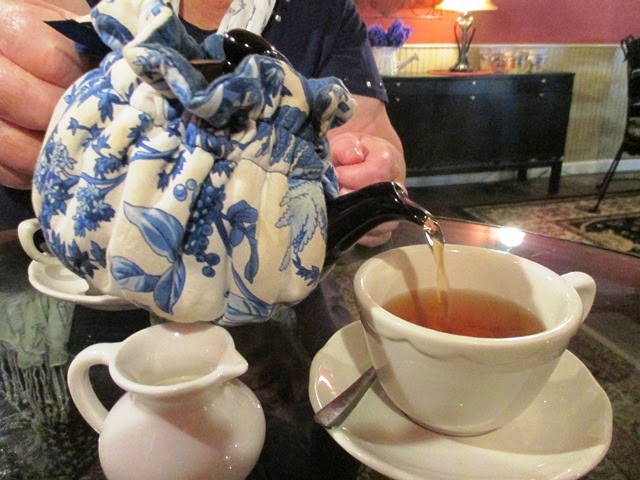 Our scones arrived next.  I chose lemon cranberry and Mom went with the white chocolate raspberry.  Both scones came with little silver dishes of clotted cream and lemon curd.  The scones were – hands down – the best we’ve ever had.  Scones get a bad reputation because they’re often so hard and tasteless.  Not these.  They were both full of flavor and the texture was soft and moist – almost more muffin-like than scone.  The lemon curd was cool and tart and the homemade clotted cream was amazing.  It was sweet, creamy and was a perfect fit with our warm, fruity scones. 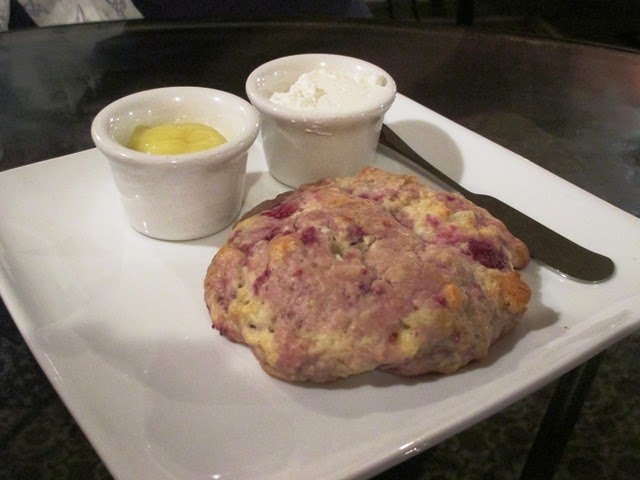 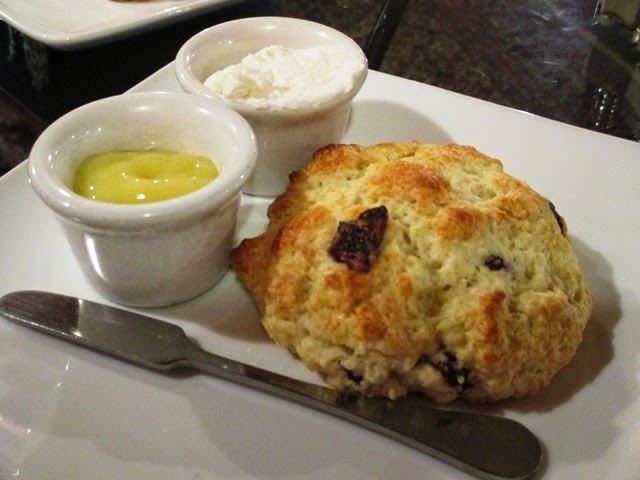 We were still munching the scones (they were big) when our tray arrived.  It was definitely fit for a queen ... or two!  There before us were three tiers of beautiful sandwiches and pastries.  Jillian gave a quick rundown of what was on the tray.  On the top we had two crab salad croissants, curry chicken salad in a pastry shell and tuna salad in another shell.  The second tier had a brownie filled with raspberry and topped with white chocolate shavings, a lemon tart, an apple crisp and a gluten-free chocolate crispy/cookie/gooey thing.  On the bottom was an array of crustless sandwiches including cucumber with cream cheese on white bread and egg and tuna salads on wheat.  Mom and I were in heaven. 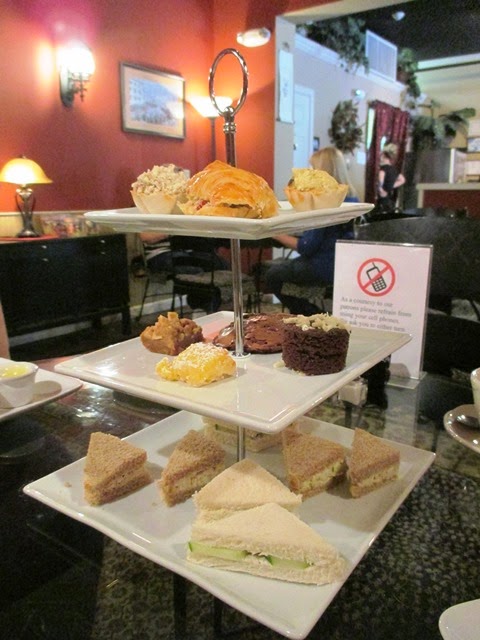 Since Mom doesn’t do cucumbers, I ate those while Mom had the tuna and egg salads.  I later tried the curry chicken and crab salads.  Everything was fantastic.  I loved the cucumber sandwiches because they didn’t overwhelm you with cucumbers.  They were sliced thin and had a layer of cream cheese underneath.  Every bite was perfect.  The salads – all mixed with various vegetables – were flavorful and the breads were very soft.  As for the desserts, the chocolate pastries were rich and thick while the fruit pastries were tangy and refreshing. The little apple tart was even topped with real apple slices!

I couldn’t take my eyes off the table next to me because one of the women was drinking something that looked like a glass of sangria.  When I asked Jillian what it was, she said that it was their homemade raspberry iced tea.  I ordered one (Mom opted out) and it was even tastier than it looked.  It even came with a free refill!  I was one caffeinated queen. Our grand total came to $26.16, which Mom and I thought was an excellent price for the food and the presentation.  We’ve seen tea services priced much higher, but we can’t imagine that they would be any better than Molly’s.  Even the restaurant itself was clean, quaint and the perfect getaway from bustling Main Street.  We wouldn’t change a thing about our experience.

You may not think a few tea sandwiches and some drinks would fill you up until dinner, but Mom and I were stuffed.  If seafood isn’t your thing or you’re looking for something a bit fancier than strapping on a plastic lobster bib, give Molly’s a try.  Pinkies up!