Working in Newport has been strange.  Although I enjoy the city, I think it’s more on a “wouldn’t want to live there” scale.  I’m more of a Cape Cod gal at heart.  I find it much less pretentious.  For this edition of Laura’s Lunch, I decided to take myself to a place that all the cool kids at work like to frequent – Keenwah (that’s “quinoa” in hipster). 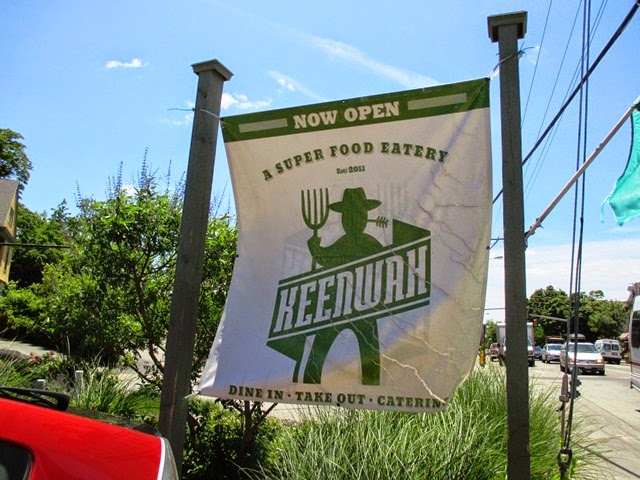 At first I thought the purposeful misspelling was cute, but now it just irks me – especially after eating there.  I pulled into the parking lot and stepped inside to look over the menu since they don’t have a working website (annoying when you just want to pop in and out during a lunch break).  There was a lot to choose from, but it was all … odd.  Now please don’t think that my fat ass has never been in a “super food eatery” before.  I’ve eaten healthy food; I’ve seen healthy food.  My problem was that there were SO many ingredients in each item that I had a funny feeling the overall taste would be flavorless. 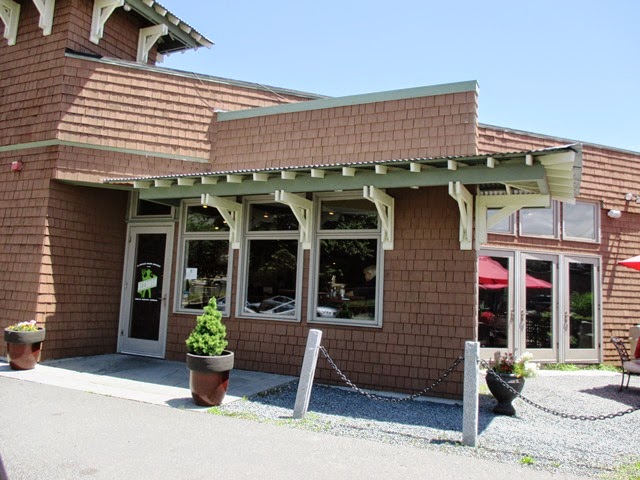 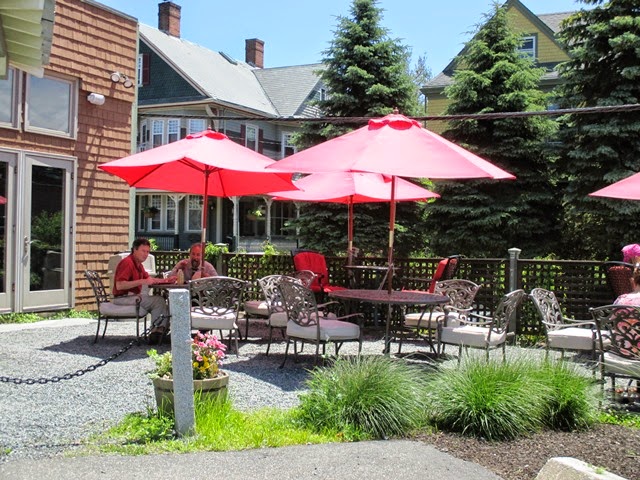 I decided to order an acai energy smoothie ($7) which consisted of organic acai puree and powder, strawberries, bananas, green tea and soymilk.  I also chose “The Macchu Picchu” burrito ($8), which was organic quinoa, spinach, sundried tomatoes, non-dairy walnut pesto, feta cheese and choice of scrambled eggs, tofu or tempeh in a sprouted wheat wrap served with sweet potato home fries or fries and orange wedges.  My total came to $16.20, which shocked the hell out of me because I hadn’t been paying attention to the prices.  I know that’s an insane amount for one person’s lunch, but I was hoping for a good experience. 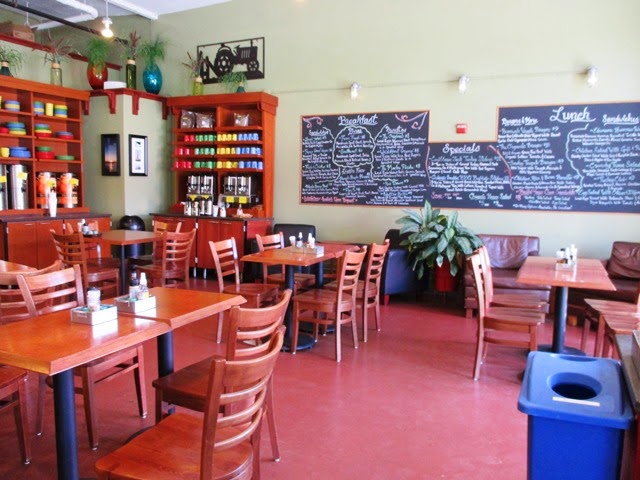 I waited quite a while because they were making everything fresh, which was a good thing.  I looked over the menu and noticed that they seem to cater to people with food allergies or those on restrictive diets (i.e., gluten-free, vegetarian, etc.).  I should mention that the interior was very cute and trendy and outdoor seating is also available.  The staff was also very friendly, especially when I had realized at the last minute that I never did choose between scrambled eggs, tofu or tempeh in my burrito.  The waitress informed me that scrambled eggs (which I don’t even like) were going in by default.  My mistake.

When my food arrived, the waitress brought it over to me in a little cardboard box.  I took a quick sip of the acai smoothie and it was very thick and had a strong berry taste.  I couldn’t recognize any other flavor.  It was like a mixed berry yogurt, but that’s pretty tasty so I had no problems with the smoothie.  I did think it was a little small for $7. 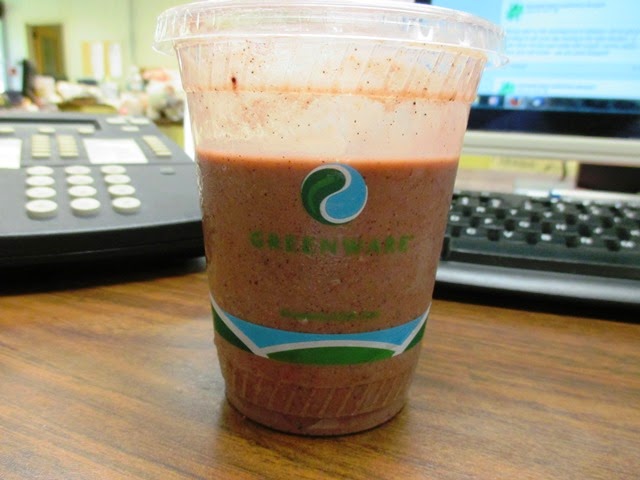 I returned to work and opened the box of food.  It seemed like they kind of just threw everything inside, but whatever.  I was hungry.  For my sides they gave me sweet potato home fries and orange wedges.  The orange wedges were OK, but I’m not really a fan.  The sweet potato home fries were good, but they were cold and a little too mushy.  This actually could have been an awesome side dish if they had been cooked a little more because I love the taste of sweet potatoes. 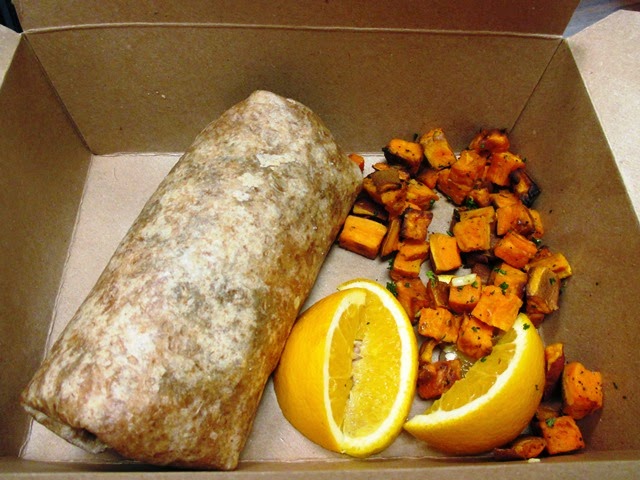 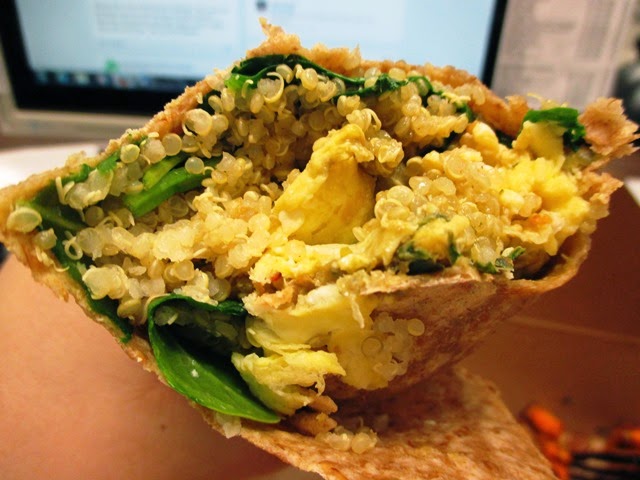 As for my burrito – bleh.  I mean, I wasn’t disgusted or anything.  It wasn’t the worst thing that I’ve ever had.  I just didn’t like the flavor combination and unfortunately I found out that I don’t like quinoa!  It looked like fish eggs and had a gritty/grainy taste and texture.  My mouth had a weird aftertaste for the entire day.  There was almost no feta cheese (my favorite) except for one pathetic attempt to include a piece at the very bottom of the burrito.  The eggs were eggs (nothing special, but they were a little cold) and everything else tasted strange.  I will say that for $8, you do get a pretty large burrito.  I was full until the evening and I guess the only good thing that came out of my lunch is that it kept me from snacking before dinner.


Will I be going to Keenwah again?  Only for the smoothies.  There are a couple of other ones I’d like to try but I definitely won’t be ordering the food again.  It’s just not my style.  If I’m doing healthy, I’d want a piece of fish with a side of vegetables or a big salad with grilled chicken.  Different strokes for different folks, I guess.