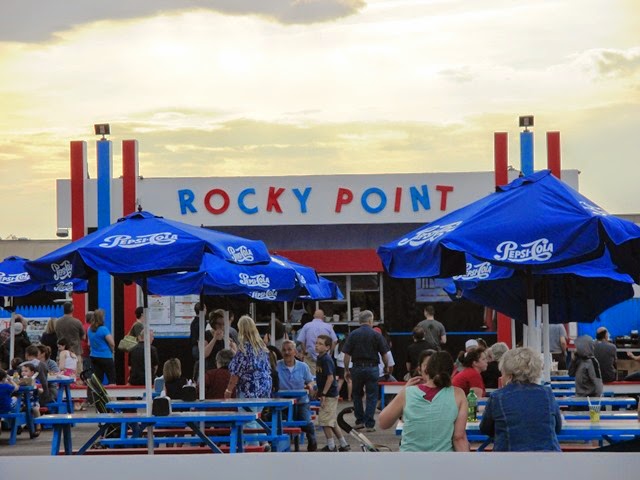 I waited all year to see that commercial on TV.  Summer had begun and it was time for my family to pile into the van and take the short (but what seemed like hours to a child) drive to Rocky Point Amusement Park.  Once we arrived, my sister and I would slap on wristbands for a full day of riding the rides.  She was younger so she stuck to the kid section with Mom, but I liked the rollercoasters and had to ride with Dad most of the time.  I thought I was a total big shot – even though I cried the first time I went on the Corkscrew.

Rocky Point closed in 1996, leaving me forever heartbroken and locked in a world where a young me is still enjoying the Music Express, the Free Fall and the House of Horrors.  I also missed the food.  Those tiny little clam cakes in the white bag, sitting at the long tables at the Shore Dinner Hall and then passing out in the backseat of the van after a long day of food and fun.

That’s why Mom and I were beyond excited when we heard about the opening of the Rocky Point Clam Shack.  According to various posts on Facebook, a food truck was going to be set up in the Ann & Hope Plaza on Post Road in Warwick and there you could get all of your old time favorites like clam cakes, chowder, lobster rolls, fried clams and the old fashioned Shore Dinner.

On Memorial Day, Mom and I finally decided to go back to “Rocky Point.”  When we pulled into the Ann & Hope parking lot, we didn’t see it right away.  What we did notice was a crowd.  A HUGE crowd.  A HUGE crowd with a line that almost reached the Post Road sidewalk! 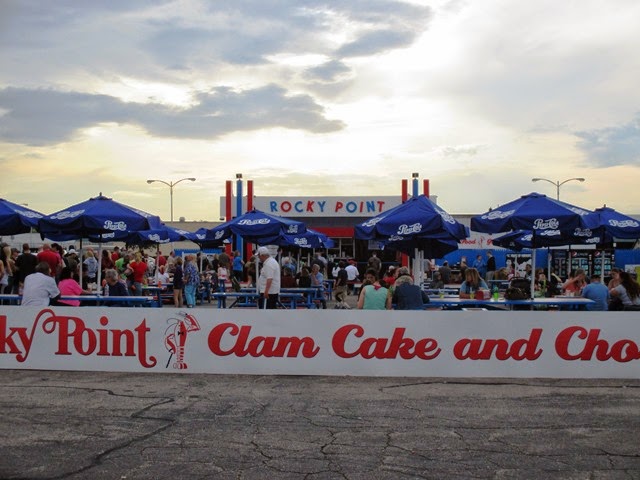 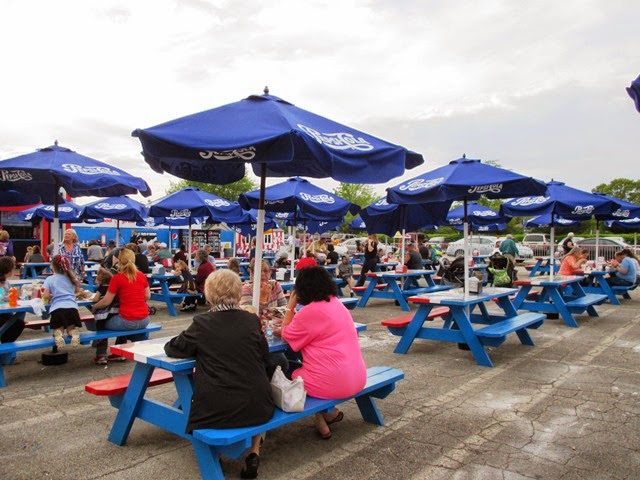 Mom and I were overjoyed because the food truck – which is really more of a trailer – is made to look just like the entrance to the old Rocky Point Amusement Park.  There was music playing on the loud speakers, picnic tables shaded by colorful umbrellas, a Del’s Lemonade stand, pictures of all the old rides and various memorabilia for sale.  This was as close to Rocky Point as I was ever going to get again.

The smell of the food was intoxicating, so Mom found us a picnic table and I stood in the long line and waited about 20 or more minutes before I could get to the window.  I normally hate waiting, but I was so excited to be there that I ended up talking to the woman standing in front of me about my favorite memories of the park.  After we shared our love for the Flume and how we both had forgotten about the train ride that took passengers all around the park, it was time for us to order.  For a place that was insanely busy, the staff was pretty organized. 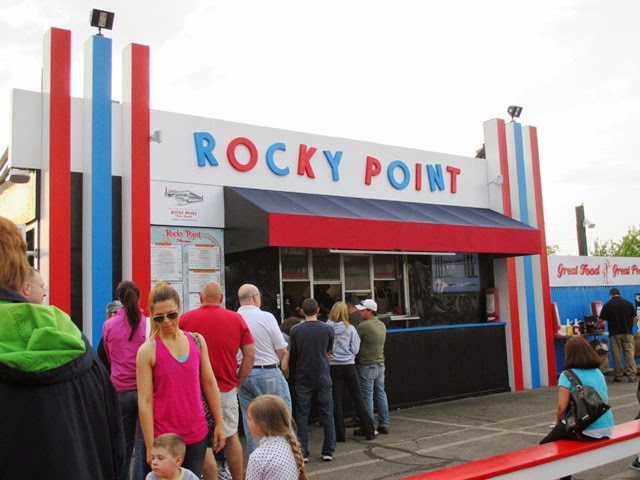 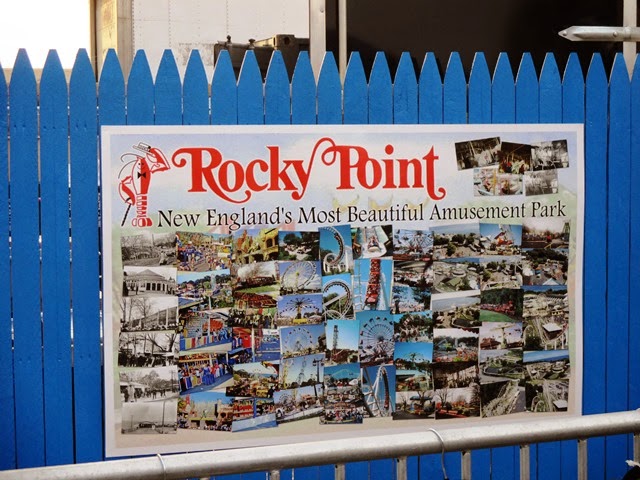 I ordered a regular box of Rocky Point “Famous” Clam Cakes ($4.50), a plain Angus hamburger ($5.50) and a combo of chowder, clam cakes and watermelon ($6.99).  I had my choice of New England white, Rhode Island clear and Rocky Point original red chowder, but my favorite has always been white.  (Although I may be tempted to try the original red someday.)  I took a seat on one of the long benches to wait for my food, but not before getting an orange soda for Mom from the nearby vending machine and ordering myself a cup of watermelon slush from the Del’s truck. Excluding the drinks, my total came to $18.35.

I waited longer in line than I did for my food, because it seemed to come out in no time at all.  I picked it up at the window where it had been stacked neatly in cardboard takeaway containers.  I found Mom and we dug in.

I want to say that Mom and I were there mostly for the experience, and we were hoping that the food would at least be somewhat decent.  We were really amazed at the quality of what we ordered.  Mom’s hamburger was excellent.  It was cooked perfectly and had that meaty Angus taste.  Even the bun was soft and fresh.  She was thrilled. 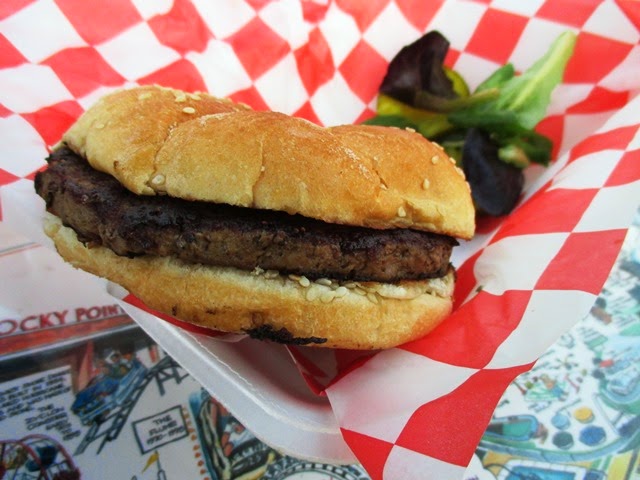 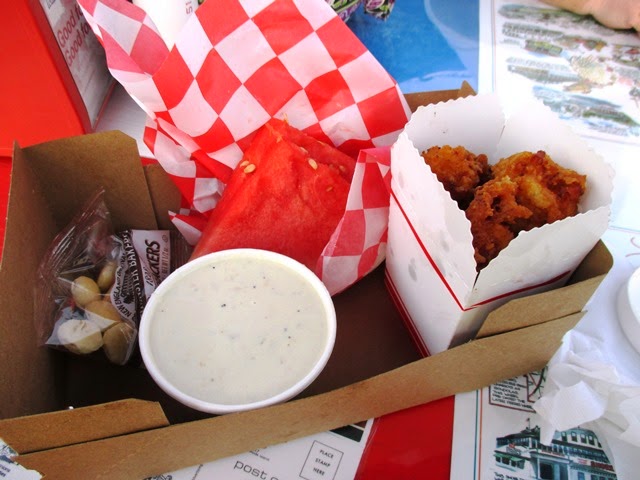 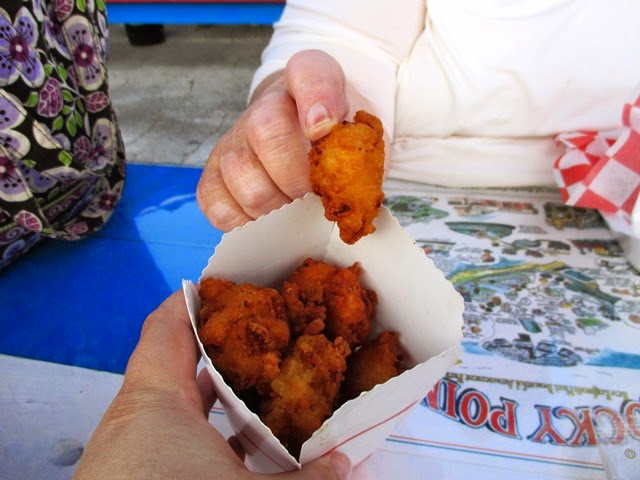 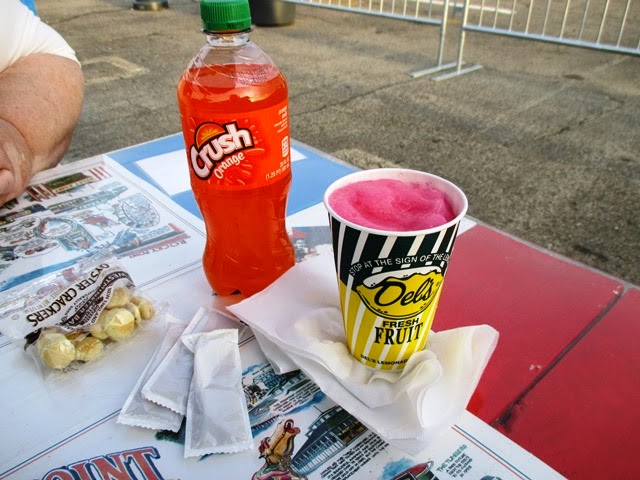 My clam cake and chowder combo – accompanied by two pieces of juicy watermelon – was delicious.  The chowder was exactly how I like it – thick, creamy, white and full of tasty potatoes and clams.  As for the clam cakes, they were as tiny as we remembered and full of flavor.  As small as they were, they weren’t at all greasy.  In fact, they were so light and fluffy that you could pop a bunch of them before realizing that you’d eaten half the box already.

The menu at Rocky Point Clam Shack is pretty vast, offering something for everyone.  Smelts, calamari, shrimp, scallops, clams and lobster are served – some with recognizable names like “The Flume” lobster roll and the “Kiddie Land” hot dogs and chicken fingers.  (Click here to view.)

Mom and I can’t wait to go back, and we highly recommend Rocky Point Clam Shack to everyone that loved the food and the atmosphere of the old park.  It’s a great place to remember the good times while having a delicious seafood meal.  I wish I was there right now!