Mom and I have been to The Chateau in Norton twice many years ago.  I had also ordered takeout from the restaurant when I was working in the next town over.  The food wasn’t memorable, but the restaurant was pretty nice and had a great view of Lake Winnecunnet.  We decided to give The Chateau another try.  As excited as we were pulling into the parking lot, we left in quite the opposite state. 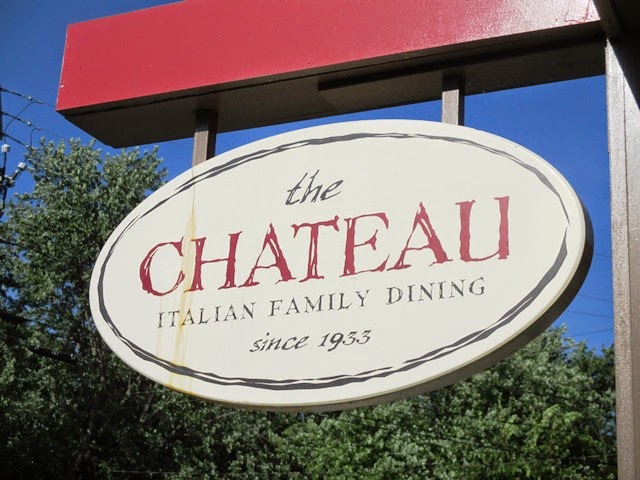 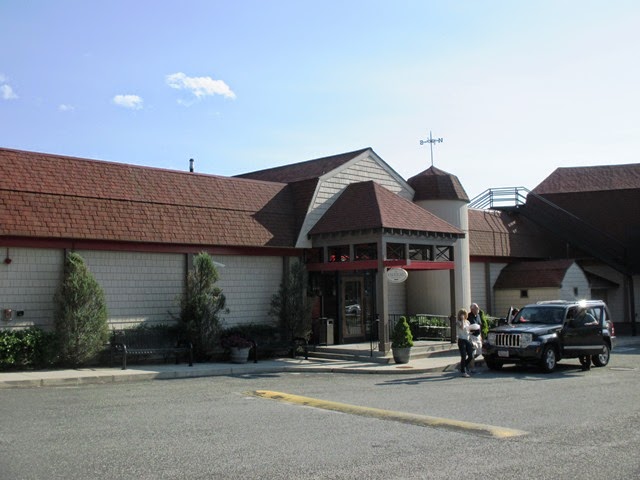 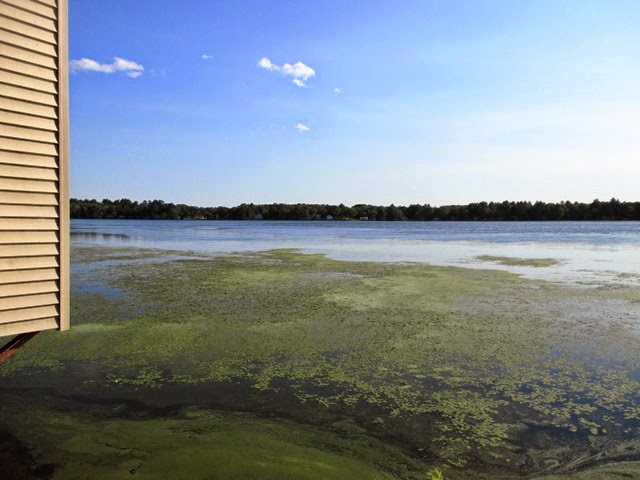 The restaurant was exactly as we remembered – very old school Italian with lots of reds and golds.  Perhaps it could use a 2014 update, but restaurants that stick with the old fashioned stuff tend to have good food.  Mom and I were seated by the window overlooking the lake, which was a nice touch.  We were quickly greeted by our waitress (Katie Anne) who took our drink order – Mom’s “After 5” martini ($8.95) and a mint mojito for me ($8).  It was my first mojito ever and I loved the minty/limey taste.  Mom loved her chocolaty/mint drink as well.  Both beverages were large and priced adequately. 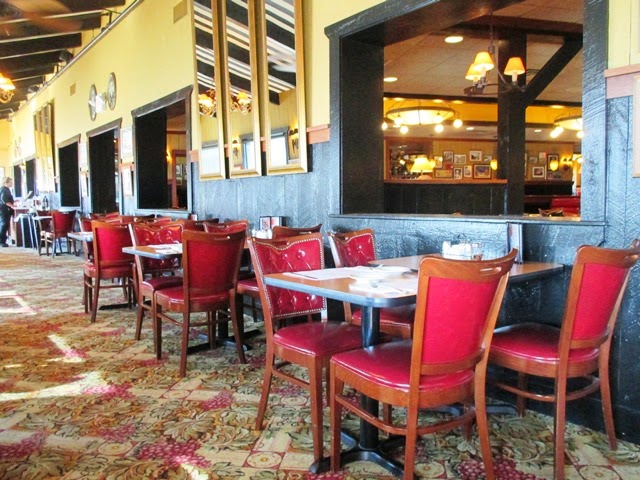 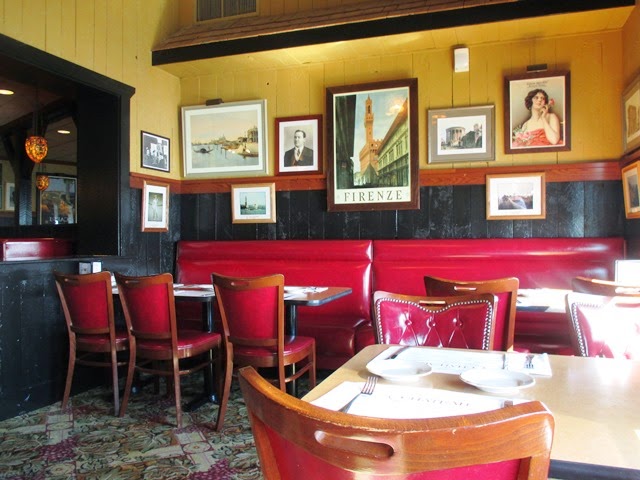 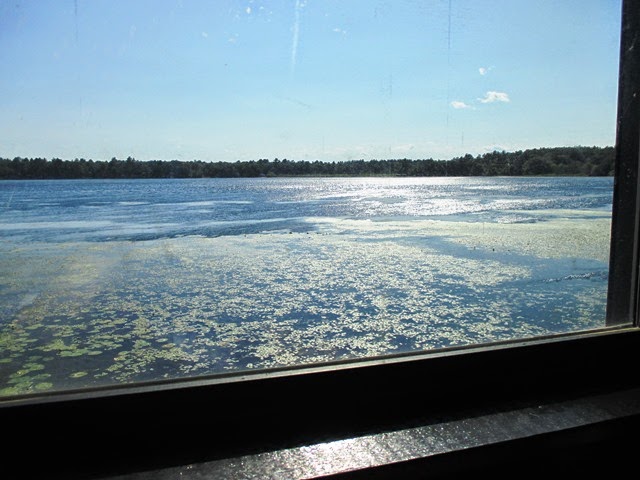 Katie brought over a basket of Scali bread which was soft and delicious.  Our only complaint was that there weren’t enough packets of butter in the accompanying dish.  We could have asked for more, but it was not a big deal.  Both Mom and I found ordering a little difficult because there is just SO much to choose from (click here to view the menu) that it can get a little overwhelming, but we finally narrowed things down.  For my entree I chose the fried Ipswich clam strips, but I was told they were out of all things clam.  I was looking forward to some strips, but I ordered a Caesar salad ($8.99) with fried buffalo chicken ($3) instead.  Mom ordered broiled scrod ($17.99) with a side of spaghetti with meat sauce ($1.99).  We also decided on a half order of their famous toasted ravioli ($4.99). 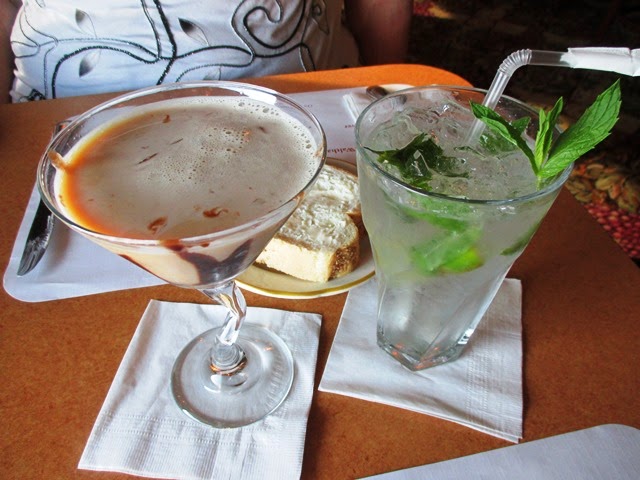 Katie walked away and we started in on the bread.  Before we could even spread the butter over the first slice our toasted ravioli arrived.  Katie said something in a joking way like, “They were bored back there.”  Um … ok.  Now normally when you get a half order of something there are about six items on the plate.  Not here.  We got three ravioli.  That’s all.  Three good looking ravioli with some marina dipping sauce sitting in the center of a half empty plate.  Since Mom was getting pasta with her meal, she sacrificed one ravioli so I could have two.  They were very tasty and stuffed with cheese, but soft and a little difficult to cut.  This was our first indication that the order of ravioli had possibly just been heated in the microwave.  They would have been amazing if they had been fresh, and for $4.99 it just wasn’t worth it. 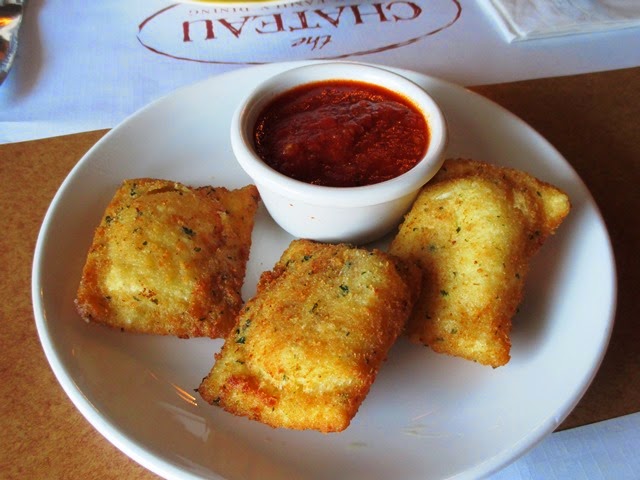 Our lunch arrived at a more appropriate time than the appetizer did.  Everything looked good.  Katie told me that they had to put my buffalo chicken on a separate plate because there was just too much of it to go in the salad.  What she meant was that there wasn’t enough lettuce in my bowl, so rather than drown them in buffalo chicken, she’d put them on a plate to make me think that I was getting more for my money.  I removed the melon, strawberry and pineapple that was sitting amongst the leaves and put them to the side.  I took three strips of buffalo chicken off of the plate, noticing the whole time how limp they were.  I prepared my salad (I like to chop everything up in tiny bits) and dug in.  Although it was flavorful, it was nothing special.  After only a few minutes, my lettuce began to wilt and my chicken – which had an extremely spicy buffalo sauce – got even limper.  I think perhaps the “fried” description on the menu should have read “boiled with breading.”  Or perhaps they were microwaved as well.  The free fruit seemed fresh, but my food was definitely not worth the price. 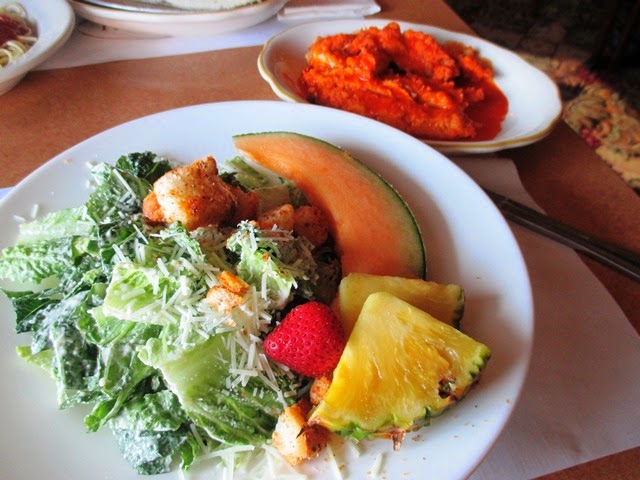 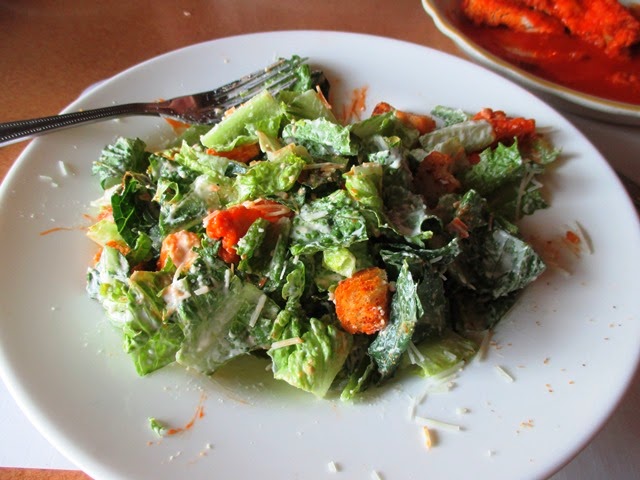 Mom’s fish was "meh."  In fact, she didn’t care for it at all.  She ordered scrod, which can be any white fish, but in this area it is usually cod.  She should have asked, because what she received was a nondescript fish complete with black skin on the bottom running the full length of the fish.  She’s never had a piece of scrod with skin on it before.  It was really off putting.  The taste of the fish was mild, but the temperature was on the cool side.  It actually got cooler toward the middle of the fish, again indicating that everything coming out of the kitchen was either being microwaved or held under a heat lamp.  Normally Mom scoffs up scrod, but she didn’t even finish half of her fish.  As for the spaghetti with meat sauce, it was cooked nicely al dente and the sauce was good, but nothing special.  It closely resembles what Mom makes at home with a jar of Ragu and some ground beef.  And let’s not talk about the fact that this particular dish cost $19.98.  Ugh! 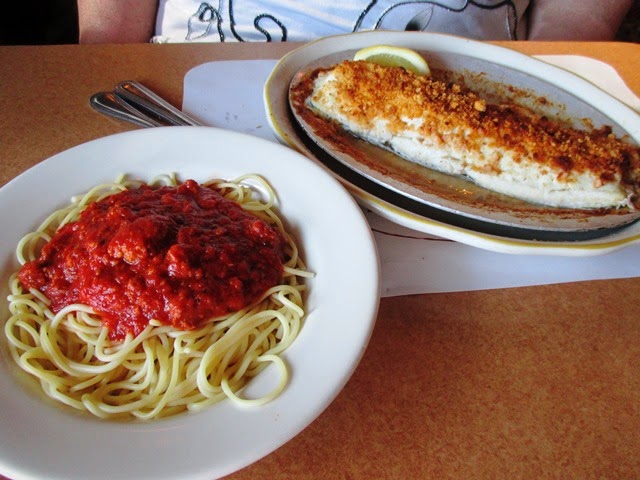 After we were done with our meals, we decided on dessert.  Mom chose the grapenut pudding ($3.50) and I went with the hot fudge brownie sundae ($4.50).  Both desserts arrived quickly and looked great.  My sundae was loaded with rich vanilla ice cream which was sitting on – you guessed it – a microwaved brownie!  Boy these people really love that damn microwave.  Mom’s grapenut pudding was delicious.  It was actually the best thing she’d eaten so far.  Katie had asked Mom if she wanted it heated, and she did.  The whipped cream topping was very cool and overall we both enjoyed our desserts and our drinks the most out of everything. 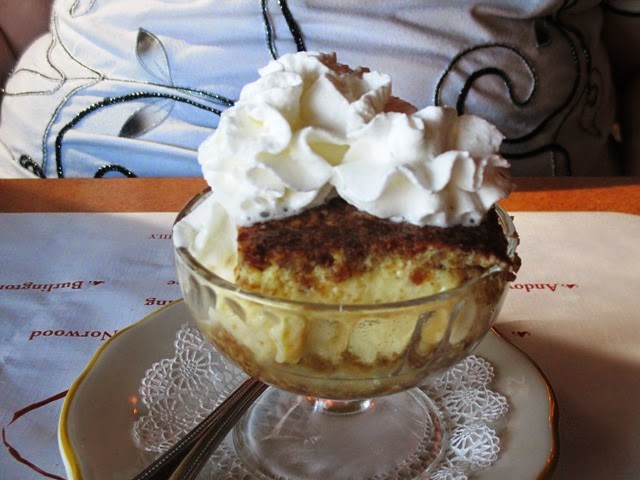 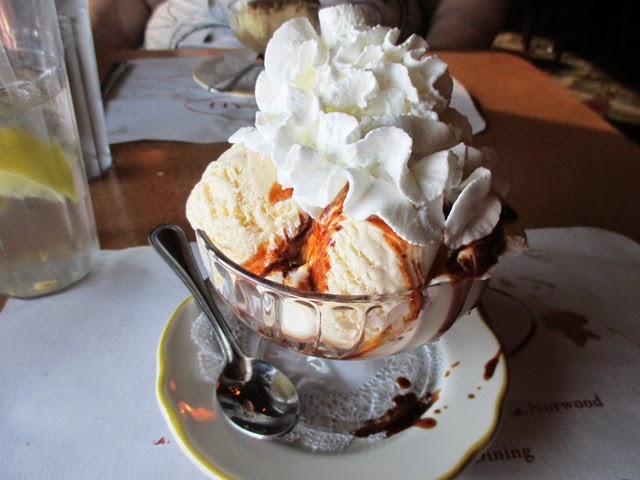 Katie finally brought over the bill.  She was an excellent server and was very attentive.  Both Mom and I were quite irked when we saw that our total was $66.24, but we wouldn’t have been so annoyed by the bill had we enjoyed everything and had the food been freshly made and worth the price.  What is with the reheated food?  It was a constant throughout our dining experience.  Perhaps if the menu wasn’t so large, the staff would be able to prepare fresh items instead of heating up dozens of options just in case people order them.

Overall, our trip to The Chateau turned out to be overly expensive and disappointing.  We definitely won’t be visiting again anytime soon, if at all.  What a huge disappointment.  I'm not sure if the food is like this at the other locations, but they really need to unplug the microwave and get cooking!