After Mom and I got our hair done at our favorite city salon, we decided to reward ourselves (hey, it takes a lot of energy sitting there all that time) with a delicious seafood meal.  Having seen the advertisements on the Phantom Gourmet many times, we took a ride to Quincy and had lunch at The Clam Box, located just across the street from Wollaston Beach. 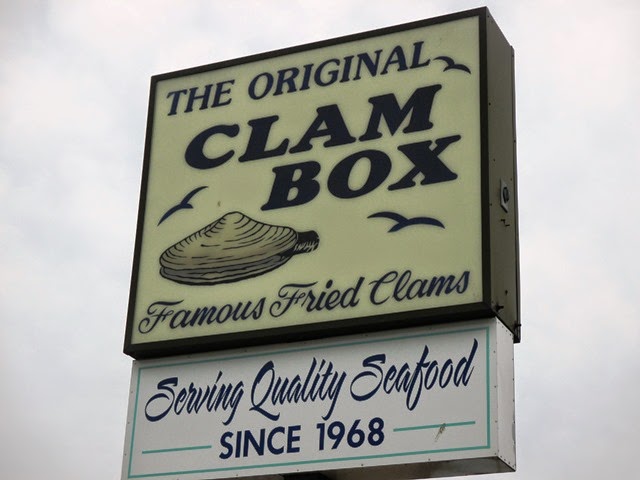 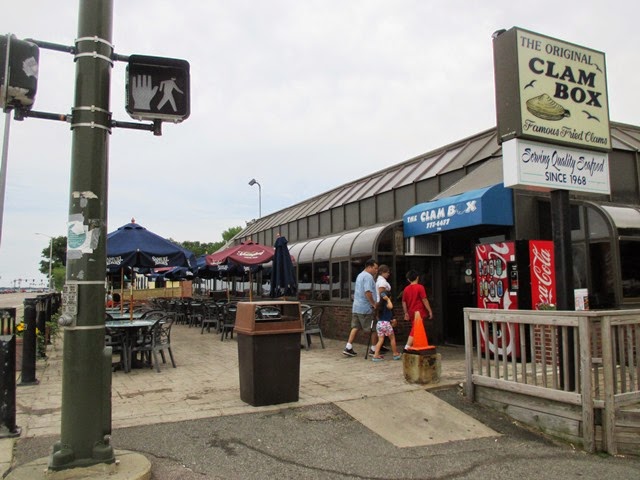 I had a mini meltdown over parking since there are only spaces on the opposite side of the street – and they were all filled – but things calmed down when I decided to drive around the building and park on the one-way side street.  Our car door just about lined up with the restaurant entrance, so I took a deep breath and we went inside.  A line had formed but things moved quickly as the servers and cooks have things down to a science. 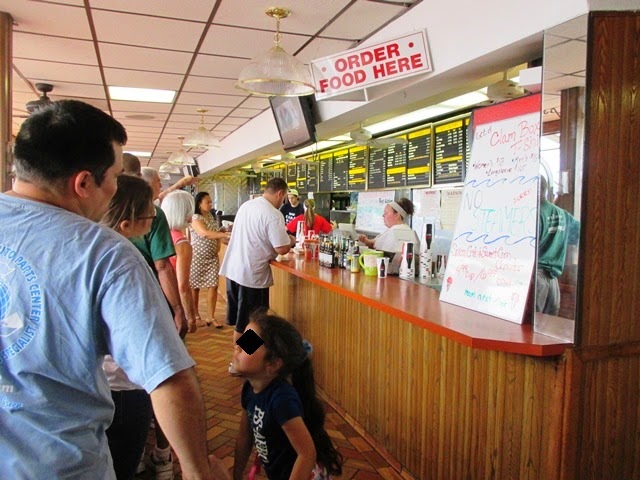 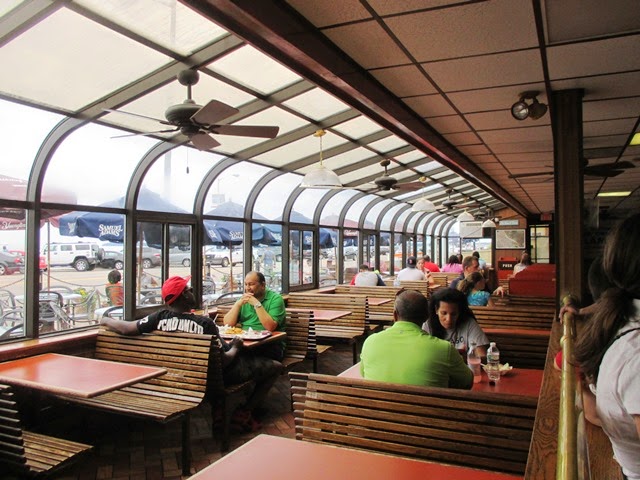 I was given a number and moved down to the opposite end of the counter to wait for the food.  Mom took a seat on a nearby bench while I filled our cups with Coke Zero (Mom) and Sprite (me).  I also swiped some utensils and napkins from the really handy condiment station which had several containers where you could pump out as much ketchup and tartar sauce as you wish.

It got a little crowded where Mom was sitting so she took the sodas and found a great table on their outside deck.  I hadn’t waited very long before my number was called.  I grabbed my heaping tray of food and headed outside to find Mom.  Everything was steaming and smelled excellent. 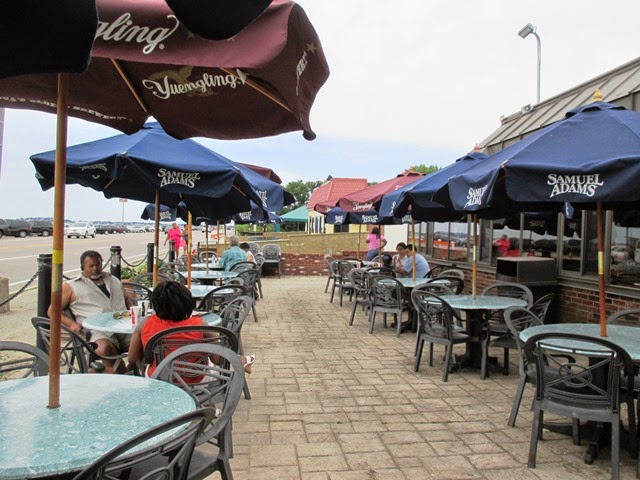 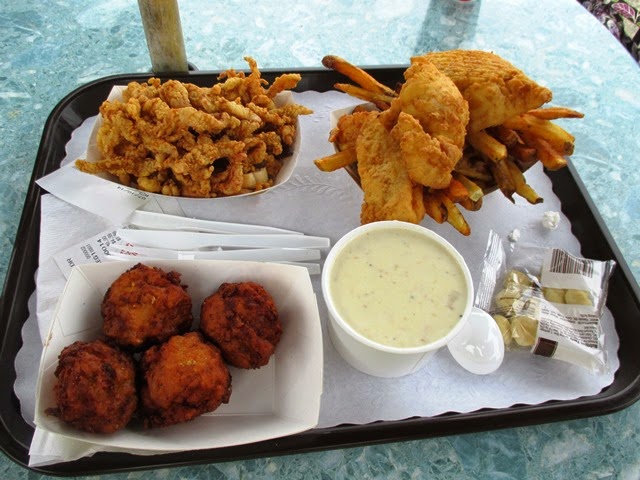 The first thing I tried was the chowder.  It was so hot that I had trouble eating it at first, but a burned mouth never stopped me before.  It had an excellent flavor and was filled with very large pieces of clam and perfectly cooked potatoes. 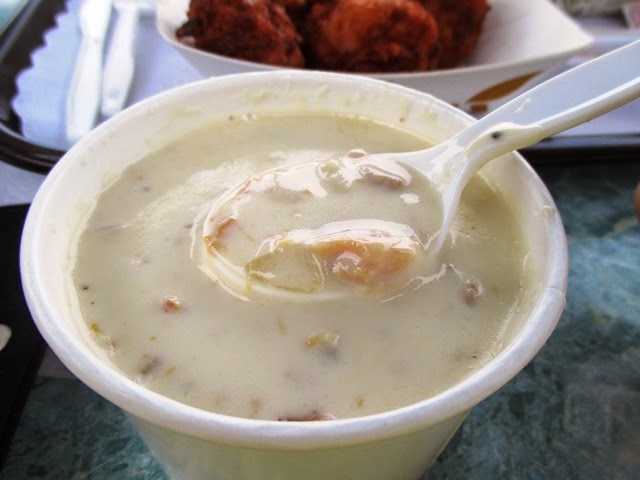 Mom’s order of fish and chips was absolutely enormous … and she chose the small portion!  What she received was three pieces of beautiful white fish with a light batter sitting on top of a mound of hand-cut fries.  The fish was very moist and flaky and couldn’t have been done better.  The crust was dry (not greasy) and the fries were crisp and potatoey.  She loved everything about her meal. 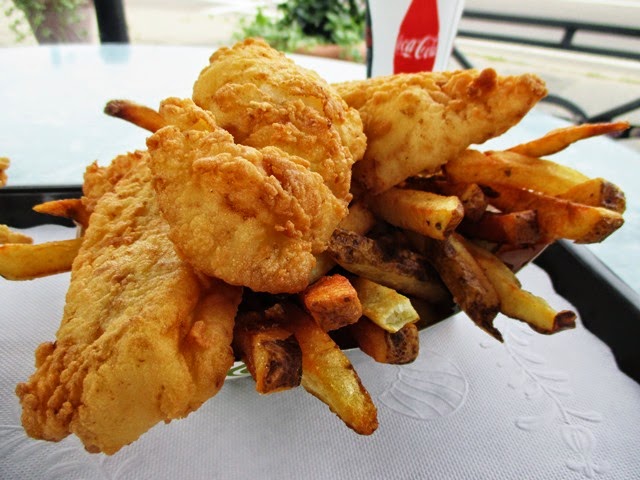 My clam strip roll was fabulous as well.  The batter on my clam strips was also dry (and I love that because greasy food makes me sick) and there was a ton of strips  on a barely visible hot dog roll which was buttered and grilled to perfection.  I ate every strip on my plate. 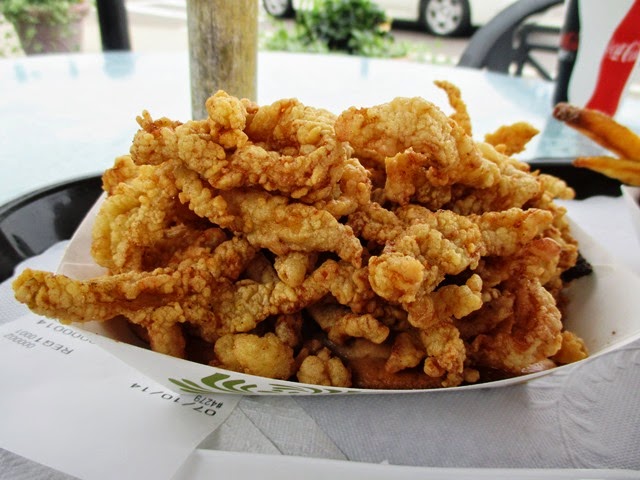 The only disappointment was the clam cakes.  Mom’s bite was her first and last.  The cakes were not your typical clam cakes, but flavored with what looked and tasted like banana peppers.  They were very spicy and Mom is not a fan of peppers so unfortunately this was a bust.  Even though I enjoy peppers and even started in on a second cake, it just wasn’t what I was hoping for.  We were looking for something more traditional, but I’m sure that many people enjoy them. 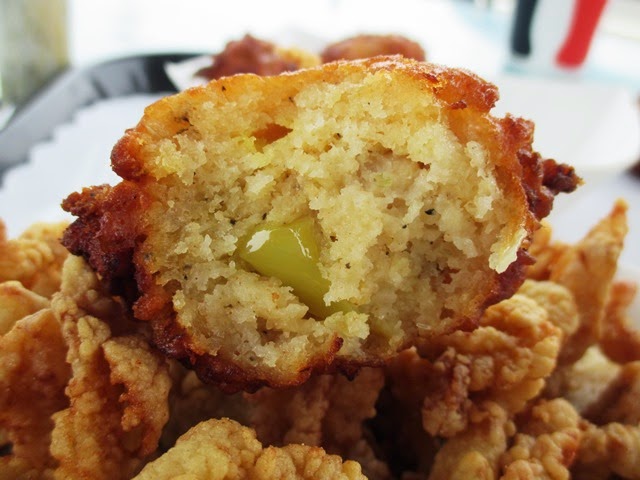 It was a lot of fun sitting outside, looking across Quincy Bay at the Boston skyline.  There is plenty of seating indoors as well, but nothing says New England like eating seafood outdoors.  The Clam Box has a very large menu (click here to view) and I’m sure that you’ll find something here to satisfy every palate.  We will be back! 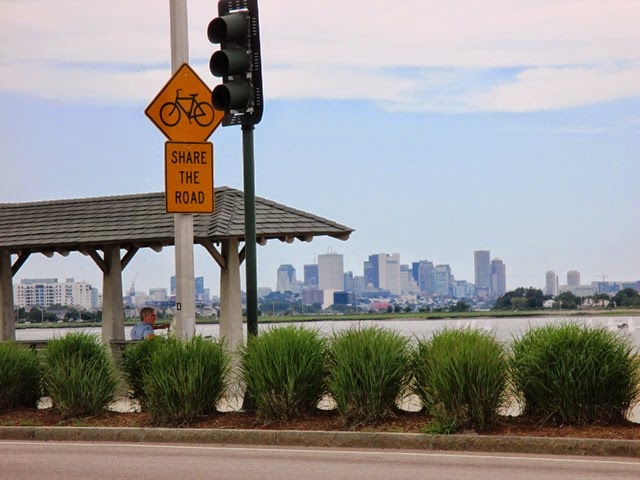