Mom and I are never in the Worcester area, but since we had just eaten dinner in nearby Millbury, we decided to have our dessert at the popular bakery Wholly Cannoli. 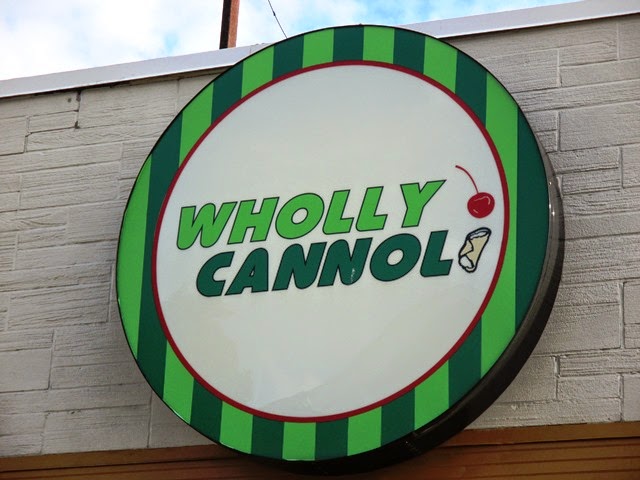 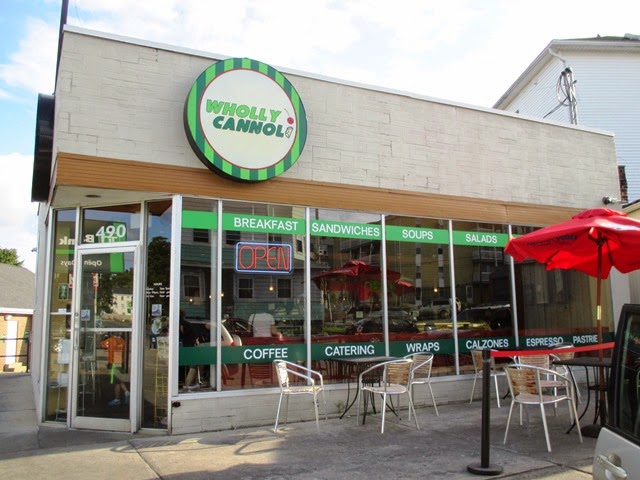 I had been to Wholly Cannoli years before, but not since they redid the place.  What was once a tiny brick building filled with several different kinds of cannolis is now a large bakery loaded with cakes, cookies, pies, tarts and very few cannolis.  In fact, there were only about six different kinds to choose from aside from the mini versions located in a separate case. 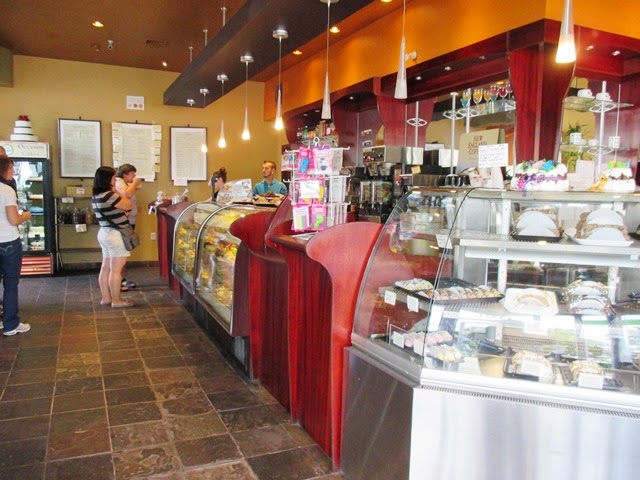 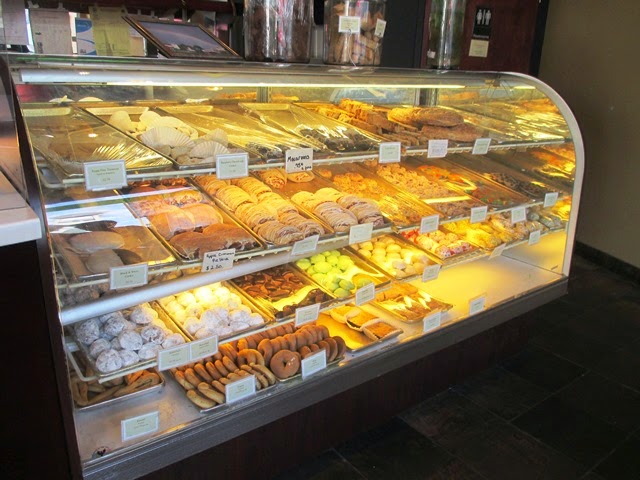 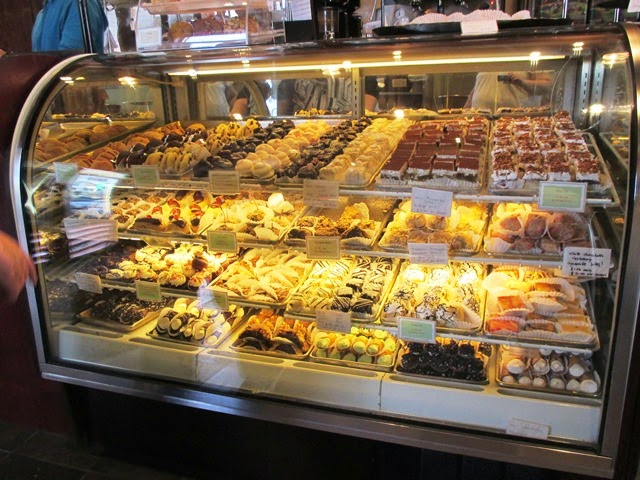 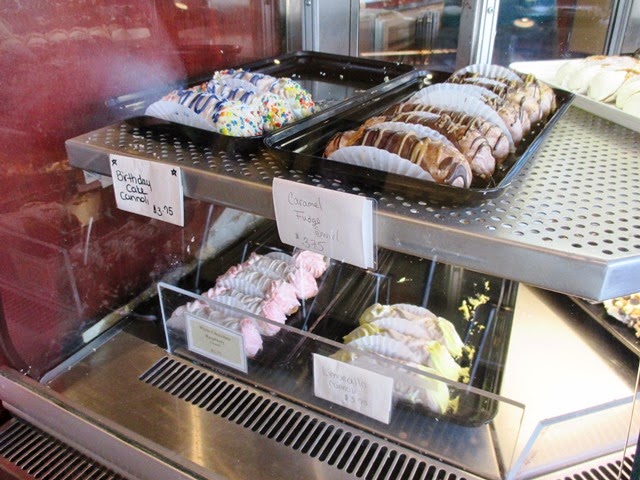 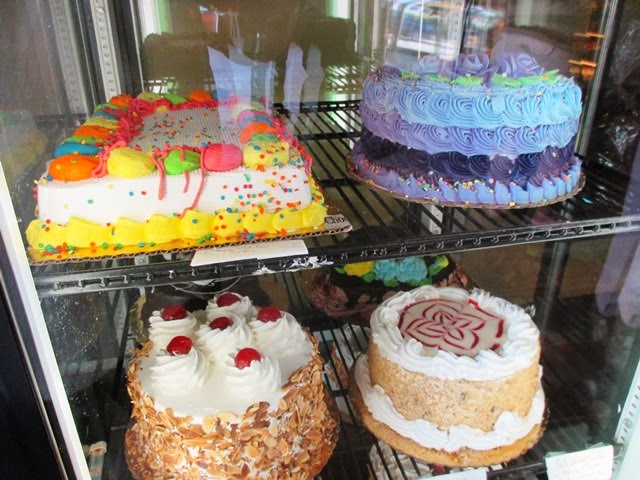 Now Mom and I love cannolis, but we enjoy a plainer shell versus one covered in chocolate or other toppings.  Nearly everything was coated in something, so we had to suck it up if we wanted to buy some.  We chose four large cannolis (white chocolate raspberry, Limoncello, caramel fudge swirl and Symphony Chip – all with dipped shells) and two mini cannolis (pistachio filling with plain shells) for a total of $18.  We ate the two pistachio cannolis right there at one of their small tables.  We both remembered the strong pistachio flavor from years ago, and it was still the same smooth cream that we had been craving.  The shell was perfectly plain with a slight crisp which allowed the cannoli to be bitten without completely falling apart.  An absolutely delicious dessert.  We couldn’t wait to taste the others. 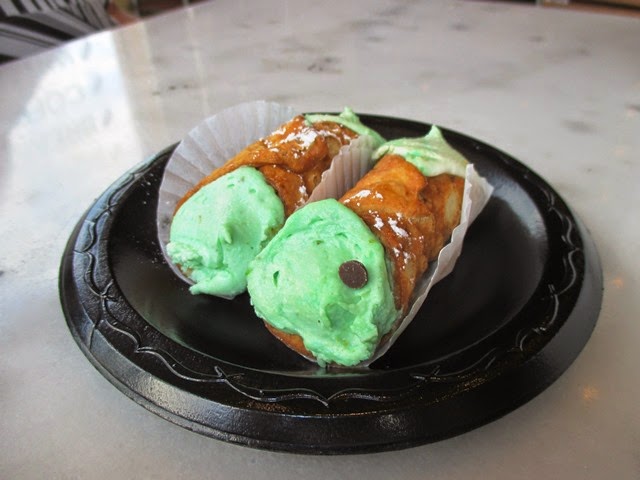 The next day we decided to cut up the remaining cannolis and sample them at our kitchen table.  The first one we tried was the Symphony Chip, which was made with chocolate, peanut butter, butterscotch and white chocolate chips.  Even the shell itself was coated in white chocolate.  Although it was tasty and the shell was pretty good, both Mom and I felt that there was too much going on with this cannoli.  We couldn’t tell what the components were, and it simply came across as overly sweet.  To be honest, we expected it. 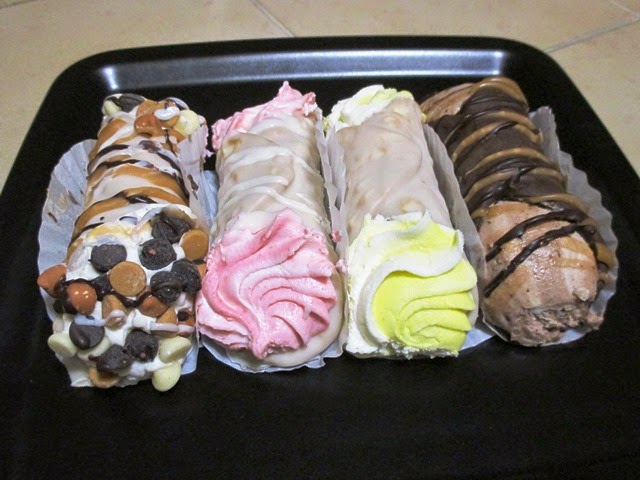 Next up was the Limoncello and the white chocolate raspberry.  We liked both, but both Mom and I noticed that each cannoli only had cream at the edges.  It seemed as though the bakers weren’t actually filling the entire cannoli.  All of the middles were completely hollow, which means that they were probably only giving a squirt to each side.  For $18, I want that thing STUFFED.  As for the taste, each of their cannoli shells was filled with either lemon or raspberry cream, which was zesty and refreshing.  The shells were OK, but a little on the hard and crunchy side.

Lastly, the caramel fudge swirl was our biggest disappointment.  I didn’t like the taste of the chocolate covered shell at all.  It seemed like it was made with a low quality chocolate, which seems weird considering the prices of all the pastry.  Even the filling wasn’t that great.  It was extremely sweet and really not enjoyable.  Mom and I tried to scoop out the filling since it was better than the shell, but we left most of it on our plates.

Wholly Cannoli’s signature cannoli is called the Dynamite Stick – their famous filling covered in caramel and dipped in a chocolate crunch shell.  We did see those in stock, but we didn’t get one.  We tried it years ago and really didn’t like it.  To us, it wasn’t a cannoli.  It was a big blob of chocolate with a dollop of cream lost in the center.

I’m surprised that Wholly Cannoli seems to be getting away from the cannolis and focusing more on prepared foods and other pastries.  (Click here to view the menu.)  Perhaps it works for them, but we just wish they carried more plain flavors over the “loaded” versions.  We’d actually like to taste the cannoli and not the ingredients.